Westport 5km - The Last Race of The Year ? 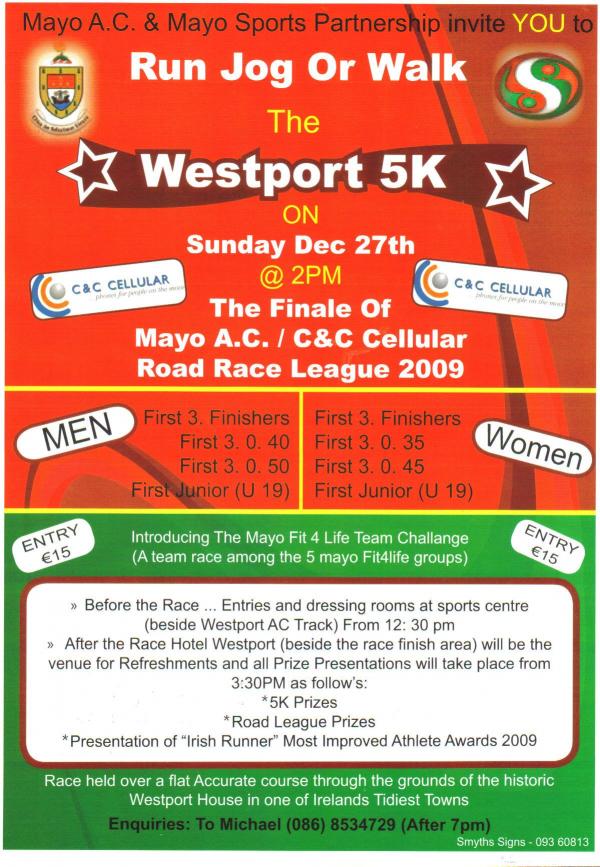 Mayo AC brings down the curtain on a very successful year at Westport on Sunday 30th December with the seventh race in a well supported and hotly contested Road League Series. Sponsored by C&C Cellular, this series of races - one a month over various distances between 5k and 10k - started in June in Claremorris, each race having its own individual prize structure.

For the League Series, points have been award to the first 25 men and women finishers, with the total points from an individual's best five races counting towards prizes. Points won in this final race, will have a huge bearing on the allocation of the 13 Road league prizes for both men and women.

This final 5k race, held in conjunction with Westport AC, will start at 2:00pm, entries from 12 noon at the Sports Track just off the Newport Road. The out-'n-back course goes though the historic Westport House Grounds, out to the triangle of sea air at the Harbour, a good opportunity to size up the opposition, and back in to the finish.

The prize structure at Westport:

There has been a lot of interest to date, and it looks like being the biggest Westport 5k field so far. You can run, walk, or jog! This is probably the last race in Ireland in 2007! So head on over to Westport and end the year on an athletic high!

Prior to the 5k race, Westport AC are organising a number of under age races at the track from 12 noon onwards: u12 boys/girls 1k run/race-walk. u15 boys/girls 1500 mtrs run/race-walk, with trophy, medals for winners.

After the race, refreshments will be available for all participants. Presentation of prizes for the 5k race will then take place, and finally the Road League prizes will be presented.