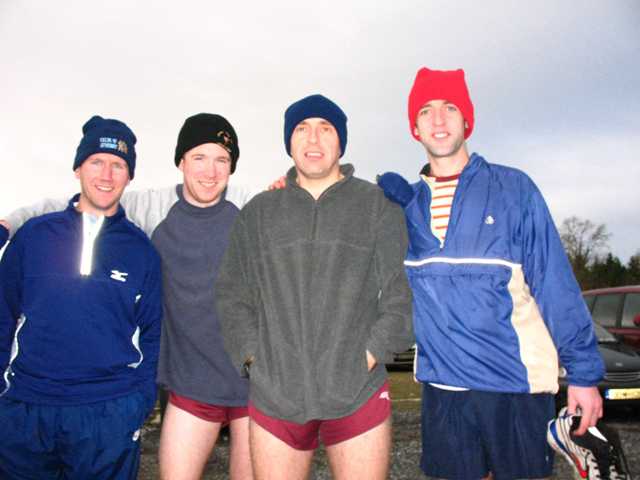 (Nb. there are a few of Jame's pics in the photo's album)

A distant view from the very back of the field!

2005 AAI Novice Cross Country Championship - Athlone IT, Co. Westmeath, 11 December 2005
This is a race I'd been looking forward to for a number of months. I'd been to the previous two Novice Cross-Country championships, in Killybegs (2003) and Mullingar (2004). Top class fields, top class courses, bottom 10 both times. I knew what to expect!

Training had been improving recently, from a pretty much standing start (or stop!) after the Longford Marathon back in August. Both hips were tight while my left hamstring was picking at me the whole time. Should be OK once I would start though. I was.

Athenry AC (Senior) sent four runners to make up the numbers:
myself, Gary Doherty, Johnny O'Connor and Alan Burke. It was thought that O'Connor then Doherty then Burke and finally myself would finish in that order and make up much of the bottom 10.

Got to the course with loads of time to spare. Estimated that the race would start at 1:00 PM but since the AAI web site didn't comment either way, we thought it would be good to be on the course from 12:00 PM onwards, and in time to see all the even-aged juvenile races being run off. In any event, the novice men didn't kick off until at little after 2:00 PM.

Good organisation and no problem picking up our numbers etc.
Saw most of the warm-up races. A good bit of team bonding took place. We would need all the humour we could muster up as it would be a long day at the back of the field :).

Craughwell AC had a team out as well so there would be a little bit of competition for who would be the final Galway club. Both Mick Tobin and Mark Davis had been going well and were hopeful of finishing in mid-field. The other two Craughwell AC lads looked likely to in a battle with the rest of Athenry AC for the bottom 10 places.

I was so close to the gun on the off than I had hardly any hearing left for the rest of the race. Thankfully, I didn't need any of it.

The course hasn't cut up at all, except at the sharp corners.
The gut-wrenching hill was actually a dirt walking track that seemed to cut up very easily and was quite uneven as well.

Mick Rice had loaned me his 15mm spikes. I could have taken out big game with them on. It was hard to know whether they were of any positive benefit to me given the overall conditions. Better to have good traction than none at all?

Pelted out of the chutes and was very quickly at the back of the field, though two lads zoomed past me going up the hill - about 500 metres into the race. They must have arrived late as I didn't see them again for the rest of the race, not that I was looking for them very closely.

Slipped in behind Tom Hunt of Mayo, saying to myself that if I could keep this lad in my sights that I wouldn't be doing all that badly. Tom had finished "just behind" Mick Rice in the Senior Cross-Country in Sligo a few weeks before. How far behind exactly wasn't made clear to me. At the end of the first lap, he was about 20 yards ahead of me, at the end of the second he was about 50 yards, at the end of the third...

The other Athenry lads were sucked up by the stragglers from the main bunch and were quickly gone off into the distance on me. I felt that they would pay for that enthusiasm later in the race; they did to a greater or lesser extent!

Other than the two lads passing me out early in the first lap, there was no passing activity for me outside of skinning a lad at the end of the second lap and another during the third lap up the hill. Not sure whether either of these lads finished, however. I know this to be the case as only four finished behind me: the two other lads from Craughwell AC, who were tailed off very early on, a middle-aged chap who was never in my peripheral vision and a lad who seemed to be chasing me down for most of two laps. Talking to him later, it seem that he had no thoughts of getting to me and all of just finishing in one piece.

I did my best to chase down a neighbour from home by the name of Michael Cunningham (Bilboa AC). I may have gotten to him if the race had been another lap. Tom Hunt, at this stage, had moved ahead of Cunningham and seemed to be almost up with Gary Doherty, who also seemed to be coming back to me a little. I certainly wasn't quickening up.

My splits were fairly consistent with the first lap being fast, the second slower by about 15 seconds, the third about 5 seconds slower still and the last slower still by two or three ticks. Hard to clock the laps exactly as the start was off the course, as was the finish. Saying that, this would concur with my own feelings about how the "race" went.

I think I met Burke going up the final mini-hill as I was going down - making him about 150 to 200 metres ahead of me.
As before, I seem to do much better going up hills than I do going down them. Tom Hunt must have taken 10 yards out of me going down the mini-hill on the first lap but I made most of it back going up other side of it a few seconds later.

Midways though my third lap, I was seriously worried I was going to be lapped. As I was going up the mini-hill, the winner was bombing down the other side. It was a bit of a shuffle to get to the start of my 4th lap without the winner dusting past me ala Road Runner, something I achieved with only a few seconds to spare, as was the case in Killybegs back in 2003 too. Phew... I could now relax!

Got good support from Mary Porter and Billy Caulfield on the course. Otherwise, I had a few escapes from young girls hopping on the course to cross and not seeing me. It wasn't as if I was going very fast. I frightened one particular pre-teenager by shouting at the top of my voice to keep in (didn't use any bad language either), rightly so as she was attempting to literally back out over the barrier while talking on her mobile and holding hands with about three of her girlfriends at the same time. I think she was taught a valuable lesson there :).

Struggled to the finish, to an absolutely empty chute of runners :(. They hadn't quite started dismantling the finish area yet but can't have been too far off. Michael Heery (AAI President) was still there shaking hands with competitors, unlike two years ago in Killybegs when I got home some stage before midnight, something I reminded him of, both last year in Mullingar and again this time around.

I stuck around to shake hands with the other four finishers behind me. There were a few lads on the course who had dropped out during the race. I will never understand why anyone would drop out after a lap and a half who isn't injured or looks in no great physical distress.

Didn't stay around for the published results, though we would probably have gotten some within 30 or 40 minutes of the finish, if we had gone looking for them. No doubt they will appear on the AAI went site today (Monday) or tomorrow?

A highly recommended race. Always a huge standard - relative to where I usually finish anyhow! - but nice to run in the same field as fellas who really *can* put one foot in front of another quickly.

The Athenry AC finishing order was: Burke (first Cross-Country
race) -> O'Connor (no running since the NYC Marathon) -> Doherty -> Myself.