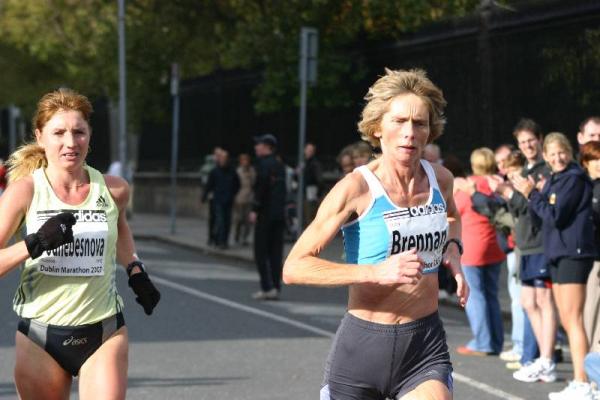 More of Alan's great Irish Athletics photography can be seen at

The Dublin City Marathon was a wonderful race this year: it always is. It was a wonderful day for our club too. Putting so many well-trained and ambitious runners on the start line of a big city marathon was a fine achievement, one that will live in my own memory for many years into the future. Our club slogan for the last few years has been ‘Be Your Own Inspiration’ and thankfully many of our members seem to have no problem living out that slogan.

For myself running Dublin is always a journey back to my roots. Since I moved to the ‘wesht’ in 2000 my annual trip to the Dublin City Marathon has been my chance to check in with some old memories and wonder what life might have been like if I had stayed in the ‘smoke’. Although I visit Dublin regularly during the year, on Marathon Monday I get see the city under familiar circumstances and can hope to gauge how things are changing. I’m glad to report that things are only changing slowly and that rumours of the demise of Dublin City as a great place to live or visit are greatly exaggerated.

I first ran Dublin in 1999 and my experience then was different. I was flying solo in those days and the challenge of 26.2 miles on a bank holiday Monday was a purely personal one. Despite having family in the town, they never quite ‘got’ the marathon thing and so left me to it. Travelling to the race with other runners is the only way to do it. Only another runner can really understand the crap we put ourselves through or pretend to listen as we jabber on about the race to come. At this level, marathon running probably isn’t a great spectator sport.

This year Dublin was unusual in terms of my recent races in that I was fit and ready to go. This isn’t something I’ve been able to say often in recent times. Two long stretches on the sidelines in 2006 and 2007 has given me a better perspective on events like the Dublin Marathon. It’s certainly more important to be in the game than it is to be able to play well. Having said that, this year I had no excuses to fall back on if things didn’t go to plan. Over the twelve weeks of training I’d missed only four training runs and had felt strong throughout. As many runners will know, times like this can be a little disconcerting. This time I’d only have myself to blame if the whole project went belly-up.

The night before was great as usual. Nice early meal with the gang – plenty of chat but no hanging around for port and cigars. At half-past eight it was back to our respective houses, hotels and apartments for an attempt at an early night and uneasy dreams of glory or defeat.

Race day dawned to clear bright sunshine and gentle winds. If this held out we’d be blessed. The last meet-up came and went and soon we all stood nervously behind the huge inflatable arch that marks the starting line and knew that the next few hours would tell an interesting story. I’m guessing that most people were in the same boat during those seemingly endless minutes before the start. We sent out positive vibes to every other runner in the race but our private minds were consumed with what lay ahead for ourselves.

In other years an account of my race has read like an epic personal adventure replete with episodes of narrowly avoided disaster, escape from the jaws of success and visions of Harry Potter in Ballsbridge. This year my race was weirdly straightforward. I tried to set off at 6:18’s and couldn’t manage that but kept the head down. I stuck to my running as well as I could and passed half way in 1:24:01. I felt like I was running well but that I probably wouldn’t be able to pick up the pace on the way home. I was wrong. I was able to get going slightly faster as we came back towards the finish though the south city and over the slightly more benign sections of the route. The second half was 1:22:19 for a 2:46:20 total, a personal best by over two minutes. As Bob Geldof once said, “...is that it”? No drama this time. No blisters. No wheels threatening to come off. No theatrical finish. Not a great story to tell if I’m honest. It’s what we all say we want after all, a trouble free race where the plans that we’ve carefully made come to pass but before this year I can’t remember it ever happening to me.

It’s only afterwards that the details start to come back to me. Little snapshots start to emerge out of the foggy confusion of race memories. I remember the guy who finished just after me and wanted a hug, any hug. I was happy to oblige. Say what you want, I don’t care. I remember big smiles on familiar faces as we milled around the finish area. I remember seeing Michael O’Connor with a mile-wide-smile. Well done Michael – you deserve it. I remember talking with Lucy Brennan who was cool as a cucumber, the remarkable Gerry Forde, the inimitable Tom Hunt, Norn Iron’s Peter Ferris, pride of Mayo John Byrne, the Ghostie Postie who’s secret is safe with us and of course, most important of all, my comrades in arms from Athenry AC.

We let the moment linger. We’ll have a long winter of icy winds and wet roads to cover before we can dream of Marathon Monday again but memories of autumn days in Dublin can keep you going for ages.