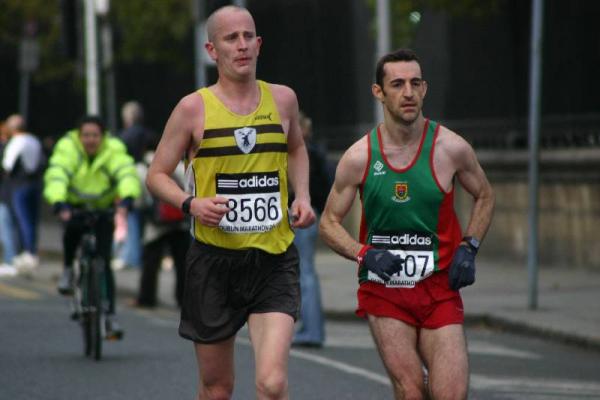 More of Alan's great Irish Athletics photography can be seen at

The Mayo AC men’s team has claimed silver medals in last week’s AAI National Marathon in results just released by the AAI. The Mayo AC team was lead home by club stalwart John Byrne who recorded a superb time of 2:35:23. Hot on his heels was their second man home, TJ McHugh who ran 2:40:58. The scope of TJ’s recent improvement can be gauged by the fact that he completed this race in a time of 3:07:42 in 2006. Next past the post for Mayo was Anthony Devaney with a superb clocking of 2:52:39. Anthony held his race together superbly well despite going through a few tough mile close to the finish.

Everyone in Athenry AC passes on their sincere congratulations to our near neighbours in Mayo on this fantastic team performance.

In addition to the silver team medals for Mayo AC the evergreen Tom Hunt once again made the podium at a National Championship event by claiming the bronze medal position in the M55 category and of course we’d like to extend our warmest congratulations on yet another fine racing performance from Tom.

The Athenry AC team, silver medallists from last year, put in a brave effort to take home a prize again but came up only fractionally short in fourth position. This was however a very strong team performance from Athenry with several of our runners posting personal bests and other making successful marathon debuts.

We’ll get you next year Mayo!

The other Mayo AC runners on the day as they appear in the results are;

many thanks Mick, for your generous coverage and warm comments on our success in Dublin. Naturally we are delighted and especially so for John Byrne who brilliantly led the team to silver, and a well deserved first National medal for him in his 10th Dublin. 4 PBs from nine athletes was great too. Well done to all the Athenry participants and A BIG Thanks to them for their support , inspiration and camaraderie, we look forward to future battles with ye on the roads .. and in the fields - Strictly Come Running!