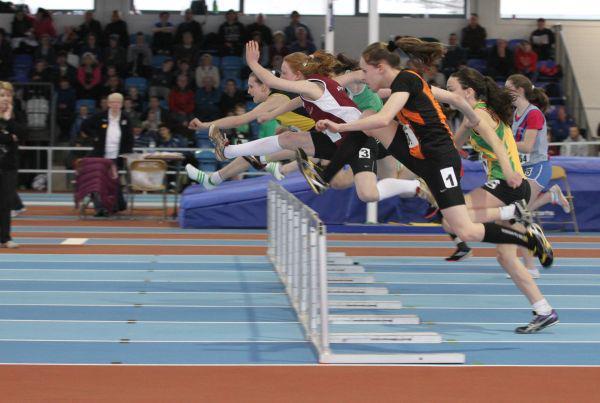 Athenry Juveniles athletes travelled to the All Ireland Indoor Track and Field Championship which was held last weekend in the new international indoor athletics arena at Athlone IT. This was a very high standard event where only the top three finishers in the recently held provincial indoors championship qualified to compete. The top juvenile athletes from the four provinces of Ireland competed against each other over the two days of the event and Athenry athletes put in some great performances agaiinst Irelands finest.

Evan Quirke had qualified to compete in the U17 60 m hurdles and both the long jump and the high jump. The high jump didn’t go Evan’s way on the day but like the true champion he is, he came back strongly on the second day of the weekend to bring home a bronze medal in the long jump.

Brandon Lee had done exceptionally well at the Connacht championship to qualify in the 60m, 60m hurdles and the 600 m long distance. Brandon ran well in the 60 m sprint recording a time of 8.65 seconds, but he really did super in the 600 metres where he claimed an All Ireland silver medal for Athenry AC in an excellent time of 1.42.46. He then went on to take bronze in the 60m hurdles – a great achievement. We have a short video of Brandon competing in the hurdles uploaded on our Athenry juvenile AC facebook page.

Lydia Doyle continued her very impressive form to finish fifth in the U14 60m hurdles in a very fast time of 9.71 seconds, and then went on to compete in the long jump where she finished sixth with a great jump of 4.4 metres.

Mathew Tracey also showed how well he has been going in training with a new personal best in the U15 high jump. Aubrey O’Brien competed well in the U13 high jump, U13 long jump and U13 hurdles – a fantastic achievement to have qualified to compete in 3 events. Niall Kenny competed in the U16 800 metres where he recorded a time of 2.19.30 and he also ran well in the U16 60m hurdles.

Well done to all our athletes who all performed to the best of their abilities in very competitive fields, and our sympathies to Dean Treacy and Shannen Lee who had qualified to compete but unfortunately had to withdraw. We can now look forward to a break for Easter, some warm weather whenever it arrives and the start of the outdoor season. Roll on summer!

Getting up to compete against the best in Ireland is a feat in itself. The standard leaps up too, well done on the medals and just being there.