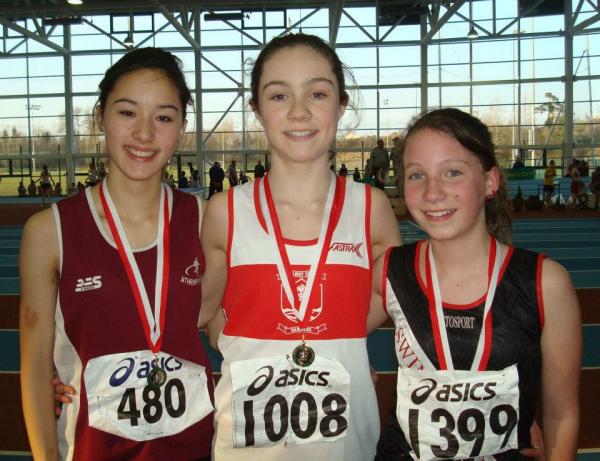 Athenry Juvenile AC athletes had a great day out recently at the wonderful new indoor athletics arena at Athlone IT where Athenry athletes competed with the very best juvenile athletes in Connacht and came home with a very impressive total of 18 medals – 4 gold, 9 silver and 5 bronze. In addition we had very strong performances from several other Athenry athletes who were very close to winning medals if it were not for the very high number of entrants on the day- all there to perform at a venue worthy of a top class European event. The arena looked every bit as good as the venue in Gotenburg where the European indoors where held on the preceding Friday.

Special mention must go to our new 2013 connaght champions who took gold in their events – Lydia Doyle U14 60m hurdles, Brandon Lee, who triumphed in the U13 600m after an extremely exciting battle down the home straight with Shane Jennings, his old pal from Ballinasloe, Aubrey O’Brien who was a very convincing winner in the U13 Long jump with a jump of 4.02 metres, which had him 33 cms  clear of his nearest rival, and Evan Quirke who was an equally convincing winner of the U17 long jump with a jump of 5.79 metres, almost half a metre clear of the silver medallist. Congratulations and well done to you all!

On the track Shannen Lee ran a very impressive U15 800m, easily winning her heat and taking silver medal, and only losing out on gold due to a faster time in the more competitive second heat. Unfortunately for Shannen, she pulled a muscle in her 800m race otherwise she would have no doubt featured strongly in other events on the day. Niall Kenny ran a great U16 800m to take bronze, and also took bronze in the U16 60m hurdles. We had an Athenry double in the boys U13 60m hurdles where Brandon Lee took silver and Aubrey O’Brien took bronze. Fabian Mangan and Dean Treacy also ran very well in a very strong field of over 20 athletes.

Evan Quirke showed the benefits of hurdles training being provided by coaches Dermot McNamara and Michelle Collins, when winning silver in the U17 60m hurdles. With Brandon Lee, Lydia Doyle, Aubrey O’Brien, Niall Kenny and Evan Quirke all medalling in hurdles, Dermot must be doing something right!

Our high jumpers also performed very well with Matthew Treacy, taking silver in the U15 HJ, and Dean Treacy matching his brother to take silver in the U13 HJ, where we had another Athenry double where Aubrey O’Brien took bronze. Evan Quirke came very close to his personal best in the U17 HJ to take silver.

Our U12 girls relay team of Saoirse Healy, Ellie Cronin, Sinead Lyons, Sarah Dowling and Laoise O’Shea had to make some last minute changes on the morning of the event due to illness which affected their chances. Caoimhe Rohan, and Laura McCann performed very well in the U12 60 m, long jump and 600m, while Ciara McDonagh jumped very well in the U12 long jump. The numbers of athletes competing at U12 level both in track and field events was extremely high which made the standard in all the events very high. Our U12 boys relay team of Shea Hennessy, James Cummins, Jack Dowling and Ruairi Collins also performed well against very tough competition.  Our U13 boys relay team of Brandon Lee, Aubrey O’Brien, Dean Treacy and Fabian Mangan took silver in their event while our U14 girls team of Dearbhla Cronin, Niamh Hannon, Rebecca Ruane, Aishling Kenny and Lydia Doyle took bronze in the 4x200m event. Well done girls – your smiles are brightening up our facebook page!

James Cuniffe and Fabian Mangan ran very well in the U13 60m competing in a field of almost 60 athletes, and Sarah Gilhooley put in a great performance in the U13 60m hurdles again against a very big field. In the boys U12 600 metres we had great runs from Jack Dowling, James Cummins and Ruairi Collins, with Ruairi finishing second in his heat but losing out on a medal due to margially faster time in another heat.

All our medal winners can look forward to another day out in Athlone later in the month for the All-Ireland indoors. Top three finishers in each event are qualified to compete in the all Irelands. All our juvenile athletes and coaches deserve great praise for putting in the hard work over the winter months when it is no fun heading out on cold dark evenings and no doubt that work will stand to them as we head into the summer and the outdoor season. Well done to all.

Training continues in the tech gym on a Monday night and Raheen pitch on a Wednesday with high jump and hurdles training on Thursday and long jump training on Fridays.