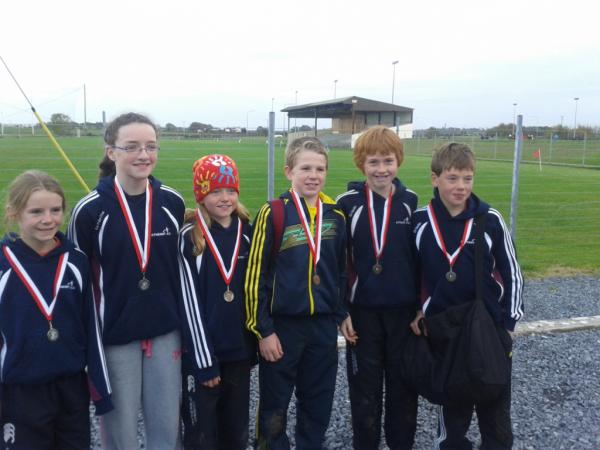 Athenry Juvenile AC Athletes put in some tremendous performaces at the Western Region Cross Country Championship for Uneven Ages, held at Creagh Ballinasloe on Sunday 3rd November. Our U11 girls got the day offf to a flying start when they won a silver team medal for Athenry AC, with Kaci Moran, Ellie Cronin and Chloe Quirke also winning gold medals with the Galway County team who finished in top spot. We also saw great running from Caitlin Mullen, Laura Kenny, Saoirse Healey, and Ciara Griffin, all of whom win silver team medals. Kaci, Ellie, Chloe and Caitlin all qualify to represent Galway in the All Irelands Cross Country Championship later this year. Super stuff girls -well done!

Our U11 boys were next up running the 1500 metre course. Calum Healy got off to a flying start and was very close to the front runners for the first half of the race. Fearghus Deeley continued his recent run of very fine form and finished strongly coming home in fourth place overall and leading the Galway finishers home, helping the Galway team to win the gold medal for best county team. Finn McIntyre , Adam Molloy, Darragh McNeillis, Geordan Mangan and Calum Holly also ran very well against very tough opposition. Most of these lads were running out of age and will have gained great race experience which will stand to them in years ahead.

Our U13 girls were in tremendously hard luck when they lost out on a team bronze to Ballina by a solitary point ( Ballina 80, Athenry 81). Caolfhinn Hennessy put in a powerful gutsy race to finish fourth overall, followed closly by team mate Sarah Gilhooly, both of whom win silver county team medals by being in the first six athletes home from Galway. Both girls have also qualified to represent Galway in the All Ireland XC finals later in the year. Katie Brogan, Aoibhe Deeley and Hazel Bichard also ran really well and almost pulled it off for the club team. Really well done girls - a great team performance that deserved a medal!

In the U15 Girls race, Shannen Lee ran a great race over 3500 metres to take a fine individual bronze medal, which will compliment nicely the medal won the previous week in Craughwell in the U16 race. Well done Shannen!

Lots of pics of the days events have been uploaded onto the Athenry Juvenile AC facebook page.