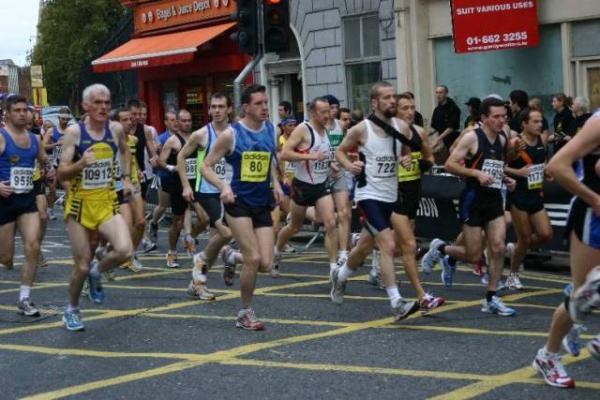 This week we look back at the clubs exploits in the 2006Dublin City Marathon.

Athenry AC had a great day out at the 27th Dublin City Marathon yesterday. We should be proud that a small club from the West of Ireland managed to field nine athletes in club colours yesterday, all of whom managed to complete the course. There were quite a few notable performances on the day. First and foremost amongst those performances was that given by Paul McNamara. It had taken quite a bit of persuading on the part of some of the running 'mortals' in the club to convince Paul to take on the daunting prospect of 26.2 miles of road-racing for the very first time. He made a decision to race at the very last moment and in fairness to him he never had the chance to train specificaly for this his debut marathon. Given these severe limitations his second place finish in the National Championships, which were run concurrently with the main event, was an absolutely outstanding performance. Paul sliced through the field in the second half of the race to complete the distance in 2:25:42, posting a negative split of over five minutes in the process.

Another top-class performance was delivered by another marathon deutante, Owen Curran. Although Owen is new to club running he had trained hard for his first effort over the classic distance. His initial target of a 3:30 finish turned out to have been more than a little pessimistic as Owen charged over the line in 3:04:49. This result was just reward for weeks of consistent quality training from Owen and doubtless a sign that there's a lot more to come from this talented athlete. A superb run!

Athenry AC Webmaster Alan Burke was another runner to turn in a fine racing performance on the day. Despite interrupted training over the last few weeks Alan also finished strongly, and smiling as usual, to smash his previous personal best result with a 3:13:26 timing. Like Owen, Alan turns up week in and week out to training on a Saturday morning in Athenry: there has to be a lesson there somewhere. Rumour has it that Alan didn't stop smiling until he fell asleep last night. Another hard-earned and well-deserved personal best performance. Congrats Alan!

Another of our runners to take chunks off their previous PB time was Michael Rooney who ran a highly commendable 3:17:01. Shortly after the race Michael could be seen basking in the glow of such a fine accomplishment on the Georgian steps of Merion Square. Michael's time was good enough to place him 523rd out a nearly 10,000 entrants, which speaks volumes for the quality of his preparation and racing.

Two old warhorses, Peter Delmer and Mick Rice, ran large portions of the race side by side and finished only seconds apart in the end. Mick's 2:49:07 was closely followed by Peter's 2:49:49. Peter's time represented another personal best for him and is the first time he has 'dipped' below 2:50 for the marathon distance. Both Mick and Peter finished relatively strongly covering the second half of the course about two minutes quicker than they did the first. Obviously, the older you get the longer it takes to warm up.

Bridget-Ann Walsh ran with her pal, the other Connemara Marathon 'Sheep Woman', Eileen Donoghue. Both athletes ran fine races in the beautiful autumn sunshine. Bridget-Anne finished just after the 4:31:00 mark with Eileen posting 4:26:39. Rumour has it that Eileen picked up an injury late in the race when another runner cut sharply accross the course to have their photograph taken and we hope Eileen's not too sore today. We understand that the errant runner was lucky to escape unscathed themselves, as Eileen was far from pleased with this state of affairs.

Another young recruit to the club, Martin Keane, ran this race on limited preparation and yet still managed to complete the course in style. Martin continued to extend his impressive running CV passing the post with 4:56:09 on the clock. He was still hale and hearty enough to swap war stories in an Athenry hostelry late into the evening. An inspirational performance to be sure.

The remaining Athenry runner on the day was Connemara Marathon race director and prolific marathon runner Ray O'Connor who completed his marathon of marathons in Dublin, this being his 26th career race over the distance. Giver his, ahem, limited opportunities for training, in recent times he was quite pleased to finish the race in some comfort in 4:56:09, quite some run given that he has only run one four-mile training session since completing the Amsterdam marathon only two weeks ago.

Mention also has to be made of our stalwart support team in the persons of Brian O'Connor and Philip Magnier who travelled all the way to the 'smoke' just to support their comrades and also Dublin based Liam Mycroft who watched like a hawk from the sidelines and relaid news of progress to darkest Galway. The sight of a familiar face and a friendly shout of support can go a long way late in a marathon. No greater devotion can a runner have to their club than to .... I know all the runners really appreciated the efforts made. Thank You!

A few Other Performances of Note.

Feargal Geraghty carried the GCH colours in the race with distinction finishing in 2:50:52. Feargal and Peter Delmer worked together very effectively in the later stages of the race and helped each other to strong finishing times.

The evergreen Tom Hunt of Mayo AC ran another high-quality race posting 3:03:39 this was good enough for third place in the M55 category. Congratulations to Tome, one of the real good-guys in club running.

Tommy-Joe Whyte of Tuam AC followed up his fine run in the Galway senior cross country championships with a 3:01:56 timing in Dublin. Due to work commitments Tommy hadn't had much time for the longer training runs recently and yet he must still be very pleased with such a great race.

Peadar Nugent completed his 27th Dublin Marathon (out of 27!!) in 5:21:45. We believe Peadar is now resident in Athenry and in any case we pass on our heartiest congratulations on yet another race completion.

There were undoubtedly other Galway, and perhaps even Athenry, runners who took part in the race that I have failed to mention here. If you know of any please drop me a line and I'll include news of their performances on this page.