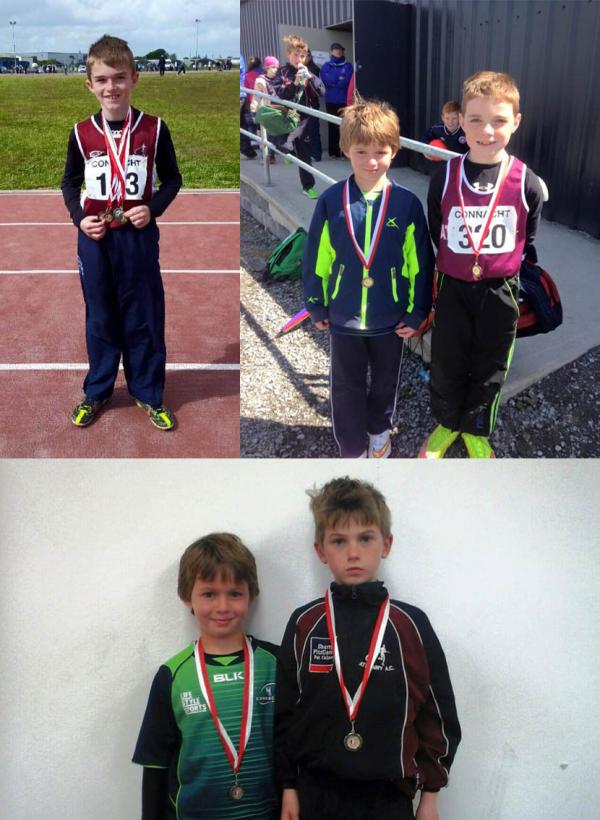 Conditions were somewhat challenging at this weekends Connacht Team and U12 T&F Championships in Claremorris, but that did not diminish the performances by the Athenry Juveniles.  The wind was blowing a gale directly along the sprint straight, and registered a massive +10.3 m/s at one point, but was +5 m/s on average.  The distance runners had to battle into this wind on the back straight, get almost blown over on the bend, and then benefit from its final push on the way to the finish.  At one point a monsoon threatened to drown the competitors but this quickly blew over to leave glorious sunshine.

Our small juvenile team competed at the highest level at these championships, bringing back a large bag of medals and more importantly progression onto the National Finals in 4 weeks time.  In the short sprints there was a gold for Ethan O'Brien and Cian McNelis (U10), and a fantastic performance from Calum Healy (U12) to record one of the fastest outdoor U12 60m times for many years in 8.32s.  In the U9 60m Aidan Shaw and Eoin Hannon placed a respectable 7th, with Aidan only coming into the pairing within minutes of the start due to Eoin's usual partner not being able to make the event and went on to record a 0.5s PB.

In the longer races, CIan McNelis took a further medal, this time partnered with Senan Treacy, finishing 2nd in the U10 500m.  Agonisingly close to a medal in the same event were Ethan O'Brien and Aska Little who finished 5th.  Darragh McNelis came up against some stiff opposition in the U12 600m and finished in 4th spot for the 600m less than 0.5s behind 3rd spot, unfortunately this is the only track event where it is the top 3 that progress to National rather than the usual 4.

In the realys, the U12 team took silver and a poor baton change unfortunately dropped the U10 team down into 4th spot.

Out in the field the ongoing battle for supremacy between Craughwell and Athenry AC was very evident.  This has been fantastic to watch all year, and it is driving all of the athletes on to achieve some great results.  In the U12 Long Jump it was Athenry that came out on top, with Calum Healy jumping 4.24m (into a +5.5 m/s headwind !!), which is 30cm further than his Galway Championship distance a few weeks ago.  Adam Molloy jumped 3.66 to finish 4th, with the 2 Craughwell athletes finishing 2nd and 3rd.  All 4 Galway athletes will progress to the National Finals and that will surely be an event to keep an eye on.  Calum finished off a great day for himself with a joint silver in the high jump, jumping 1m25.  Calum is going to be a busy boy in the National Championships.  The field events were rounded off with Aidan Shaw in the U9 Turbo Javelin who was left unpartenered for various reasons, but still managed to throw a 3 metre PB into a +6 m/s headwind.

Congratulations to all who competed, you did yourselves and your club very proud on Saturday.  Also, well-done to the parents and coaches who braved the elements and stayed around to the bitter end on Saturday to help cheer on the team - your support is invaluable to the children.