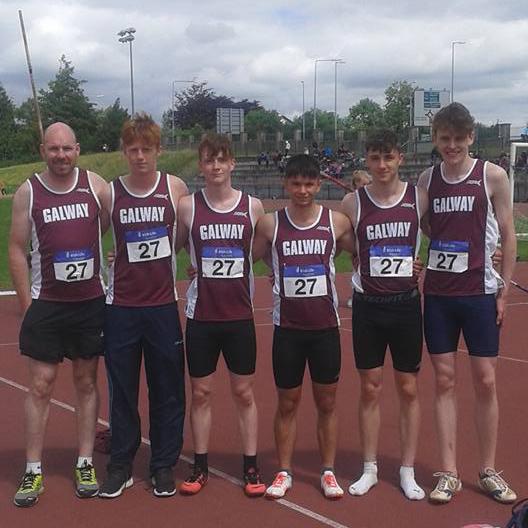 At this weekends National Track and Field league, three of Athenry ACs young stars were on show representing County Galway.  This is the first year for a number of years that a mens county team was entered, and they were competing in Divison 1 in Athlone.  Galway Women had a great year last year and so they find themselves in the Premier League (again cometing in Athlone).

For the men, Patryk Woleniuk (100m and 4x100m) and Ryan McNelis (400mH and 4x400m) carried on their seasons good form to score valuable points for the county.  Ryan had an exceptional run over the longer hurdle distance, clocking 60s and finishing a close second.  This was all the sweeter for Ryan who had to jump over the 3 foot height compared to his usual height of 2 foot 9.  Ryan is still a Youth athlete and has an exciting future ahead as a junior athlete.  Ryan is on a 3 year plan to grab a European Junior standard at 400mH.  Ryan finished the day running the third leg of the 4x400m, taking the baton in last place but coming through the field to clock a 54s 400m split at changeover.  Patryk, who is a junior sprint hurdler coached by Dermot McNamara, decided not to contest the 110mH as they were at the full senior height for the league and instead opted for the sprint and the 4x100m.  Patryk has been working hard on his raw speed and this was put to good use on Sunday and he clocked a PB in the 100m.  It won't be long before Patryk is running sub-12 for the 100.  Patryk was a recent recipient of a County Galway Athletics Bursary to help further his athletic development.  Both Ryan and Patryk are in action this weekend at the National Junior Championships where both will be chasing down medals, Ryan in the 400mH and 110mH and Patryk in the 110mH and 100m.

The sole female representative from Athenry AC in the womens County Team was Aine O'Farrell.  Aine has had a great season making huge strides both in XC and on the track.  Her selected event for the league was the 3000m and she put in a great performance to finish 3rd woman in the Premier League, against some seasoned 3000m runners, clocking an 8 second PB in the process.  Aine ran a great race, latching on to the lead group from an early stage and holding on as long as possible, and when she knew that the third place was not in doubt she eased off slightly to ensure the points - no point in heroics when there are larger issues at stake !!  Her PB follows on from her fantastic performance to win the U18 1500m at last weekends Connacht Championships, clocking another large PB improvement.  Aine has set some very ambitious, but achieveable goals for this autumns cross country season and she is most certainly a name to keep an eye on.

So Day 1 of the league ended with the Mens County Team in 6th place, just 1 point behind 5th and well positioned to get themselves into the final later in the year.  The Womens team had a truly amazing set of results to top the table after Day 1 taking the scalps of some very established county teams.  Day 2 is on 30th July in Templemore.

Full results from Day 1 can be found at http://www.athleticsireland.ie/competition/results/

Thank You to Justin Lane of Tuam AC for the photograph