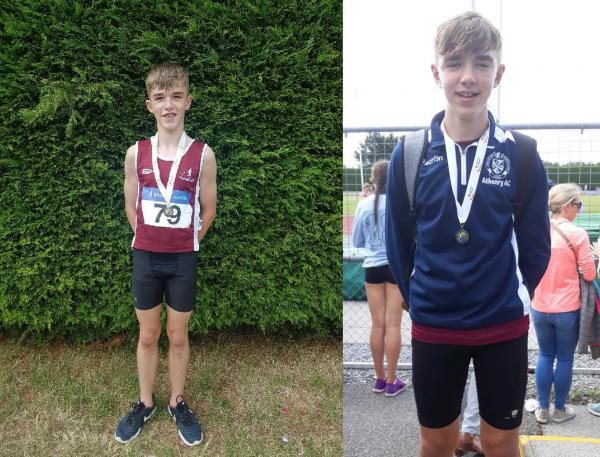 The curtain fell on a long juvenile campaign this weekend with the third day of the National Juvenile Track and Field in Tullamore.  Athenry AC had just three competitors this weekend and all came away with massive smiles and even bigger PB's

Calum has had a fair run of misfortune over the past few years, and after pulling up very heavily as he crossed the line in the Connacht Championship  250m Hurdles race it looked yet again as if fate had dealt him a cruel blow, but Calum showed true strength of character and body to bounce back.  The amount of work this young man has put into training recently is unreal and his hunger for a medal was growing daily.  In the Connachts, Calum crossed the line in 37.20s and in the qualifying heats of the National final he clocked 36.44, taking almost a second off his PB.  Lining up next to eventual winner Harry Nevin on the start line, Calum rocketed down the finish straight to take the silver medal in a time of 35.30, taking another second off his PB.  What this meant to Calum was evident after the race and you can rest assured that the medal will have pride of place for time to come.  Calum has one final outing this year in the Community Games hurdles and we wish him luck.

Sarah, like Calum has had a few mixed years, but this year has started to make some real progress and start to move back to the front of the races where she deservedly belongs.  Last week Sarah took Gold in the steeplechase which was testament to her hard work, and although there was no medal this weekend her performance in the 1500m was an equal testament to her dedication and perseverance in the sport.  For the first time Sarah dropped below the 5 min barrier for 1500m, clocking 4:59.53 and a 7 second PB. Sarah has plenty more to give and the prospect of two solid years at senior level in schools competition make Sarah a name to be watched.

Four months ago, Liam had never thrown a discus, but his stature and over 7 foot 'wingspan' (his finger tip to finger tip measurement with arms outstretched) give him the physical attributes to do well in this discipline.  Going into the National finals, Liam was ranked third on provincial qualification mark.  In his first throw he set a mark of 39.12m, a PB by over 7m and a mark in excess of that which has won 16 out of the last 18 years discus competitions.  Liam extended that lead to 39.29m in the third round and then carried that lead into the 4th round, where the in-form Karlis Kaugars (Dunleer AC) put a disc out to 42.15m.  Liam responded to take a disc out past the 45m mark (third longest throw in over 20 years of U14 competition) only to see the red flag raised for a minor foot infringement on the front of the circle (rules is rules).  The final round saw no further progression from either Karlis or Liam and another National medal for Liam to bring his seasons total to 1x Gold, 2x Silver and 1x Bronze (a good haul by any measure).  With the Community Games 4x100m and Shot Put finals still to go, there is still more opportunity to increase this years tally.

Athenry AC are really proud to see our athletes on the podium in National competitions, for the few athletes we have enter these competitions, the return is very high.  However medals are not the only thing we value in the Juvenile section, we would like to acknowledge and applaud the commitment of every single one of our juveniles during this year and we very much look forward to seeing you after the summer when we head into a very busy schools combined event and cross country season, may the exploits of our merry band of high achievers give you inspiration in your own athletics pursuits