Another Great Day in Athenry - Thornton and NiMhuircheartaigh Claim Titles

Published in Fields of Athenry 10km on 27th December 2007 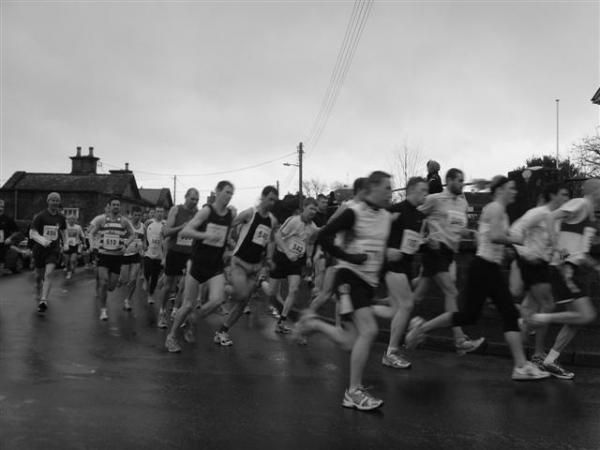 The members of Athenry AC who organise the Fields of Athenry Road Race don’t really have a chance to relax each Christmas until their 10k Race is over. Pulling together all of the elements that make this race happen is such a monumental task that each year we wonder if we can manage it within the resources we have at our disposal. Thankfully we seem to surprise ourselves each and every time.

As best as we can judge this year’s race has been a great success, however, if you think we could improve on any aspect of the organisation we’d be glad to hear your views either on the web-site here in a ‘comment’ or by email at [email protected]. It’s difficult now to imagine that in 2002 just 69 runners and walkers completed this race. When the official starter, Oliver Geraghty, raised his gun yesterday morning he had over 600 people waiting to make their way around the Fields of Athenry. It was with great satisfaction members of the Athenry Club saw such a large and enthusiastic crowd head out the Tuam road.

For the very first time our race was proud to welcome a wheelchair participant. Well known athlete Gerry Forde of the Blarney-Inniscarra club was a huge favourite with the local crowd and he gave a demonstration in the fine art of moving a racing wheelchair around the Fields of Athenry at high speed. We were indeed lucky to have Gerry in the starting line-up for our event and we hope that this division will grow in numbers in years to come.

At the front of the men’s elite field were three athletes from the top rank of Irish Athletics. Gary Thornton of Galway City Harriers, our winner for the last two years, had returned to defend his title. Gary was reportedly in good shape and was hopeful of both a strong run and a quick time. Local athlete and two-time race winner Paul McNamara was also hoping to put in a strong performance but was always going to have a difficult task against the in-form GCH man. These two fine runners were no doubt given pause for thought by the late entry of Sligo AC’s Emmett Dunleavy. Emmett, although he has been better known in athletic circles for his exploits on the track had accepted the challenge of a longer road race against seasoned road racers. His talents over shorter distances were made clear in 2007 by the fact that he made the finals of the National 1,500m Championships both indoors and outdoors. The men’s race developed into a three way battle but Gary Thornton appeared to be running the strongest even in the early kilometres and indeed he went on to dominate the men’s race. Local athlete Paul McNamara and Emmett Dunleavy has a closer tussle and it wasn’t until the second half of the race that the Sligo man asserted his dominance.

Gary Thornton Storms To The Finish...

A feature of the men’s race this year was the increased strength in depth of the field generally. Many local runners turned up fit and determined to post good times on this flat ‘track’ and were rewarded by good times in fair conditions. An indication of the strength of the men’s field is that the first forty-nine competitors finished in less than forty minutes, although it has to be said of course that this number included the two leading women’s competitors.

The women’s race was absent this year of one of the enduring stars of Irish athletics and a popular athlete in Athenry over the years in Sligo AC athlete, Lucy Brennan. Lucy had won the women’s race here in 2004, 2005 and 2006 but as the race start approached and it was known that she hadn’t arrived at registration it became clear that next year’s ‘Top 50’ T-shirts would have the name of a new women’s champion printed on the back. Perhaps next year Lucy, we missed you.

At the fore of this year’s women’s field were a brace of in-form local runners. Galway City Harrier Orla Ni Mhuircheartaigh and Athenry AC’s Ann Carter looked like favourites to contest the women’s title from the off. These two fine runners had both been winning races all through the year and indeed Orla had recently claimed an individual silver medal at the National Novice Cross Country Championships in Dungarvan. Ann went into this race as reigning County Galway Cross Country Champion and County Galway 10km Champion. Both of these women had also represented Galway at the Senior Inter County Cross Country Championships of Ireland in The Curragh as part of the silver-medal winning team in that event.

Emmett Dunleavy strides towards the finish.

When the race began Orla established an early lead over Anne and then gradually picked her way past male runners all the way home, building strength and speed as she ran and came home first without being fully extended on the day. Orla is an outstanding athletic prospect and seems eminently suited to road running. Ann wasn’t very far behind at the finish and in claiming second place she capped off a hugely success year of running. Athenry AC are indeed lucky to have such an athletic star in their membership and 2008 looks set to be a successful one for our women’s teams on road and track. Congratulations on a fine performance to Anne and all of the other Athenry AC women who ran in the race to carry our colours with such distinction.

Although much of the limelight is shed on the most gifted athletes in a race like this it is the rank and file club runners and walkers that make the event such a pleasure to be involved with. The atmosphere and enthusiasm, the fun and the chat were all part of a great day out. Athenry is particularly proud of welcoming runners and walkers of all standards and abilities to our race. We value the walkers and joggers who complete the course long after the elites have warmed down every bit as much as those same elites. This year we had a strong entry from the Fit For Life groups in Athenry, Craughwell, Galway and Tuam, with the only complaint heard on the day being that some of the ‘students’ were finishing ahead of their ‘teachers’. As these ‘Fit For Lifers’ passed under the Arch in Athenry their smiles told a tale of satisfaction and achievement at having conquered the course.

In the team events GCH completed their clean sweep, having already claimed the men’s and women’s individual races by winning both the men’s and women’s team competitions. Although a strong showing by Mayo AC in the men’s division almost spoiled their day. The ‘Harriers’ club is obviously in great health at the moment thanks to the tireless work of officials like Bernie Kelly and Danny Carr and it was a pleasure to welcome such a strong contingent from all of the local clubs to the race. Throughout the year the local Galway clubs compete like demons against each other for medals and prizes at races across the county and further afield but there also exists a strong bond of friendship between club members and officials that makes travelling to and helping out at other Galway races a great pleasure. We’re very grateful in Athenry AC for all the help and support we’ve had in 2007 from GCH, Craughwell AC, Tuam AC, Clare River Harriers, Tuam AC, Loughrea AC and Castlegar AC. We appreciate your help and support.

We’ll be posting the full result of the race on this site as soon as possible and many more photographs of the event of runners right throughout the field. We were blessed that a number of talented local photographers took the time out of their holidays to attend yesterday and they’ll be sharing the fruits of their work with us all as soon as we can arrange it.

We hope you enjoyed the day and that we’ll see you again soon.

Congratulations on a great

Can you let me know if and when the overall results and times will be posted on the website?