Published in Fields of Athenry 10km on 26th December 2014 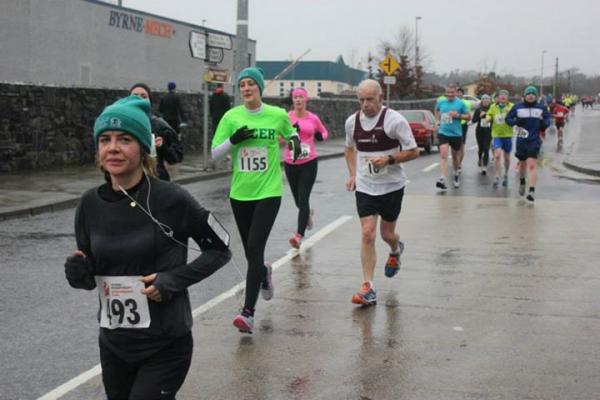 As early morning dawned on the 26th there were memories brewing of St Stephens Day 2012 when we nearly renamed our annual 10k ‘The Lakes of Athenry’ such was the volume of water on the course. With the temperature hovering just around the 2° coupled with a biting wind & torrential rain it was a day to stay in bed. But runners are a strange breed & as this year’s record number of entrants started arriving there was hardly a grumble to be heard. Dealing with diverse weather conditions is just a part of racing in Ireland and after a while you just tend not to notice anymore. By race kick off at 11.00am the rain had stopped & the course was clearly holding water but thankfully not in 2012 proportions.

With the womens race winner from the previous two years absent this time around the title was up for grabs & last year’s runner up, Norah Pieterse (Newcombe), took full advantage with a 37.02 & a clear gap to Jane Ann Healy (37.47) in second spot who also improved one spot on last year. Cushla Hehir of Ennis Track AC completed the podium whilst Catherine Thornton (Crusaders AC) & Grainne Ni Uallachain (GCH) were the remaining women to finish sub 40min.

Reigning champion Mick ‘The Claw’ Clohissey of Raheny Shamrock AC was back for a tilt at a third straight title with his closest rival expected to be former Dublin City Marathon Champion Sean Hehir. Right from the gun it was clear that the race was going to be decided between this pair & The Claw did enough to retain his title with 30.18 & a 41sec gap to Sean behind. This was an improvement of 30 seconds over last year for Mick & leaves him 20 seconds shy of the course record held by Gary Thornton. Indeed Gary is the only person to have run faster than Mick around this course with Paul McNamara the only other person to join the aforementioned three in running a sub 31min Fields 10k. Matt Bidwell of GCH completed another successful year for him by finishing third in 32.46.

This year’s winners also became the first recipients of the ‘Tommy Madden Memorial Cup’ & were also presented a ‘Tommy Madden Medal’ in memory of the late Tommy Madden who passed away earlier this year. The medal is an exact replica of the last All Ireland medal which Tommy won back in 1966 in Dromoland & some of Tommy’s family members were on hand on the day to make the presentation whilst his daughter Caoimhe, a recent recruit to Athenry AC, completed the race on an emotional day & race for her.

There were also ‘Madden Medals’ on offer to the first male & female club members home on the day & these were picked up by Jane Anne Healy & Gearoid Rohan. Gearoid had a fine race to finish with a 37.37 & 26th position, also picking up a Top 50 t-shirt for his days work (all despite a bit of unwanted pre-race drama :)  ).

Three other members also picked up Top 50 t-shirts to go along with JA & Gearoid as David Noone, Alasdair Conway & Drew Davison all finished in the 38min bracket to claim their prize. There was minor disappointment for David Meehan as he finished in 51st position & missed out the coveted t-shirt by 3 seconds with a 39.09. David can be happy with a successful years racing though where he has seen significant gains in a short timeframe.

The club had 59no entrants on the day with race stalwart Martin Keane ensuring he kept his appearance streak intact with a fine 55.02 & 2nd M70. Another notable result was from Mary Kealy who ran her first Fields in the colours of Athenry & took the honours in the W50 ahead of our own Bernie Mulryan whilst the quartet of Jane Anne Healy, Mairead Sullivan, Mary Kealy & Bernire Mulryan also took a silver medal in the team competition.

It was another successful race with records again being broken for both entries & finishers proving that no matter what the weather, we runners are strange folk & we just persevere!

Photos and post-race analysis is on our Facebook page here.

First set of photos from the day can be sourced here.

Second set of photos from the day can be downloaded from here.

Third set of photos from the day can be spied from here.

A big thanks must go to the many photographers who braved the elements on the day & in particular John O' Connor, The Mooney Family, Eirefoto & Michelle Collins.

OFFICIAL RESULT & PRIZES (as PDF files) are attached below!