Published in Fields of Athenry 10km on 26th December 2017 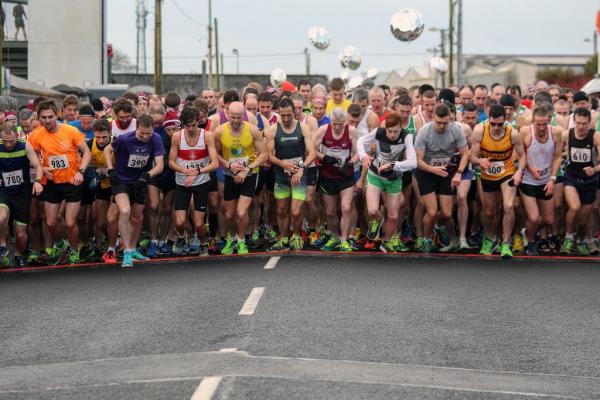 We woke up on St. Stephen’s morning to a fresh, crisp and frosty Athenry! Temperatures hovered  between 3 - 4 degrees and the wind was negligible…perfect running conditions! Numbers were at their highest since 2014 with 1095 athletes gathering at the start line opposite the train station to take on the traditional one loop route. Each junction was well marshalled and athletes were greeted with cheers of encouragement along their way. The first 2km brought us to the outskirts of the town where the countryside beckoned. The frost was glistening in the puddles on the roadside and in the fields. You couldn’t but admire the greenness which stretched in every direction.

We reached Castle Ellen after approx. another 2 km. The pacers did a very good job at encouraging the runners to stay with them! The water stations responded very well to the velocity of the runners as they kept up to the demand for water! We encountered a second water station at St Marys pitch before heading back to Athenry. The cold morning didn’t deter the loyal group of locals who scattered the route and in particular for the last km. The 16th Fields of Athenry saw Irish Olympian Mick Clohisey win the race for the 7th consecutive year clocking 30.21. Athenry’s own Jane Ann Meehan (who has been on the podium most years) took the highest step of the podium this year when she won the race 37.39.

Under the leadership of Race Director Jim Leahy the event was a great success. We have received many comments through our FB page commending the club on a great event…‘Lovely atmosphere’, ‘People so friendly’, ‘very well organised’, ‘big thanks to the 55 min pacers’ (Mary Rohan and Martin O’Hara), ‘lovely route’, ‘lovely hat’, ‘great job’.

For the second consecutive year Hygeia were the title sponsor for the race. In addition we have many loyal sponsors who have continue to support us over the years. The colour of the hat was picked to honor the Galway Hurling Team who won the Senior All Ireland Final this year. It was by far the most popular hat to date with offers to purchase same! Finally a big thanks to all volunteers, supporters and athletes who ran the race. Hope to see you again in 2018.