Published in Other News on 3rd February 2013 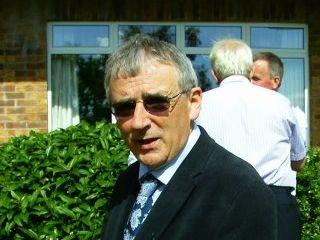 I'm after having a very sad few weeks.  Last Wednesday (23 January 2013) in the intensive care unit of St. James Hospital (Dublin) I was at the bedside of my brother-in-law, Martin Vincent McDonagh, as he took his last breath.

About an hour later we were allowed back to see him laid out and were taken aback to see a Fields of Athenry 10KM race hat left at the foot of his bed.  A doctor dropped in to explain that it was the only item that came with him when he was removed from the wards to the ICU.

Vin, as we always called him, attended every FOA race until failing health decided otherwise − the first nine of them in fact.  He thought himself a stalwart of the race though he "only" stewarded the first one.  Headford-born Vin came into the world on the exact same day (21 November 1952) as another 'slightly faster' runner, Eamonn Coghlan.

After leaving school he moved to Dublin and started working for the then Dept. of Telegraphs, later to become Eircom.  Many years later he took early retirement and set up a driving school, and took to playing golf, rarely leaving the stick out of his hand after spending many years at marathon running.

I was very close to him and we would have travelled the country and beyond to attend many sporting events together.

On such journeys we'd agree, and disagree, on many subjects, one being (in his opinion) my inferior driving to his.  I also know I failed to convince him that hurling was the best field game in the world and that golf was, 'a fine long walk spoiled with interruptions.'  (Ed. note: Headford was never a hotbed of the small ball game to be fair!!!!!)

Although we all ridiculed his somewhat bizarre behaviour at times, we all knew his heart was as big as himself as he spent his life tirelessly working for his different charities.

On these journeys, he'd love to tell me about the hole-in-one he got on the golf course.  He'd love to tell me his best marathon time, which he knew full well was three minutes better than mine, never giving me credit for the fact he was many years younger than me.  A few times I had to resort to remind him about a particular Dublin marathon when I got up with him at the twenty mile mark and left him for dead from there to the finish, after he had promised us all beforehand he was going to run the race of his life.

At his removal our eyes opened when a pupil from the driving school who had a successful test that morning placed a copy of it on the coffin, beside the aforementioned woolly hat.  He'd have liked that.  At the funeral mass I had the task of taking up some offertory gifts, which included a trophy for the hole in one, and a 1984 GAA programme, amongst other items.

At the graveside his favourite song 'The Boys of Bothair na Sraide' was sung by his younger twin brothers.  While there, I noted one of the Furey Brothers' ballad group's headstone a little bit further up.

Later in the evening we retired to my daughter's house and Vin's old accordion was pulled out, and for a few hours a full blooded sing song took place, led by his twin brothers.  As I'm not blessed with singing talent, I recited an old monologue called 'Seomra a hOcht' (*) which is a story of a Dublin girl who decided to hit for Carraroe for a weekend's entertainment, or play the field as they say nowadays!!

Afterwards, I thought of the many road races Vin and I ran around Carraroe in the mid-1990s, long before the Fields of Athenry 10KM came along on the other side of the county.

I always had free liberty of Vin's house, in which he has lived alone for the last twelve years, but it was during the last week I took notice of all the memorabilia he had in it.  An esteemed AAC member may have been the beneficiary of a few of the GAA programmes in the past, as Vin seem to never throw anything out.  While there, I took note of framed photographs on his mantelpiece.  One of which was a one-to-one with Mary Robinson, former president; another showed himself leading a group of runners looking well, with a fine high-knee lift.  Turning it over, a sticker said, 'Twenty one mile mark Dublin marathon 26th Oct 1981.'  On a glass case I counted 18 (EIGHTEEN) finisher's plaques for the same event.

Our last race together was the Raheny 5M last spring (2012).  I know he was thrilled to finish it.  A few months later he treated me to a rugby international in Aviva Stadium (my first ever), which was a reward for helping out during his illness.  This was our last sporting event together!

Mary, myself and the McDonagh family very much appreciated the presence of Athenry Athletic club members, who made the long journey to be at his funeral.  He would have liked that very much as he held the club and its road race in very high esteem, so much so that he penned an article for the 2010 booklet (page 29) - see here.

His parting words to me always were, "Mind Yourself.'  Likewise to you, Vin.  Mind yourself up there above.

I heard a story, ó m'athair.
If you have no Gaeilge it does not matter
This rural Ireland tragic tale
narrates a sad, seductive scéal
concerning lust without discretion.
Is beagan rudaí eile freisin.
uair amháin fadó, fadó,
on a little farm near Carraroe,
Lived buachall maith named Michael Mór,
an only son of 34.
When work was done at end of day
he would settle down with a cupán tae,
He never felt the need to stroll,
or spend the evening time ag ól.
His intellectual needs were drawn
from books like "Peig and Iosagain".
Meanwhile up in Baile Ath' Cliath,
a cailín deas had a bright idea.
When laethanta saoiretime came by
decided she would like to try
a little place like Carraroe.
No foreign food, not far to go
And there to meet the local clan
And b'fhéidir find herself a man.
This cailin deas with eyes so blue
was known in town as City Sue.
The lusty buachaillí came crawling,
and all agreed she was go h-alainn.
She left the men in state of shock.
O Michael Mór bí cuaramach!
She's heading West, beware a mhic.
Mar tá an cailín ana glic.
The lights shone in the parish hall
for the local Fáinne-wearers ball.
Bhí Michael ann, bhí Susaí ann,
dressed in most revealing gown.
This brave Cúchulainn of the West,
with Hurling medals on his chest,
exclaimed when City Sue came in.
"In ainm Dé, will you feach ar sin!"
Though nervous still he took a chance.
"Céad míle fáilte, will you dance?"
Go luaith on the floor they strut,
cheek to cheek and foot to foot.
She whispered into Michael's ear
"Éist anois... we'll disappear!"
"We'll use my place, the door's unlocked,
You'll stay the night in seomra a-hocht."
Chroist, Michael's head was in a spin.
Ní raibh sé ag smaoineamh thoughts mar sin.
He blessed himself, this Jezebel
would surely damn his soul to Hell.
He stood aghast, could barely stutter.
Off he pedalled ar a rothair.
Straight abhaile, into bed.
Decades of the Rosary to be said.

Now Michael Mór still sleeps alone
in his leaba beag, ochon, ochon
He often thinks of seomra a-hocht.
And what would have been. O' Michael bocht.

Vin will have enjoyed this appreciation from you, Martin. May he rest in peace.