Published in Other News on 5th February 2015 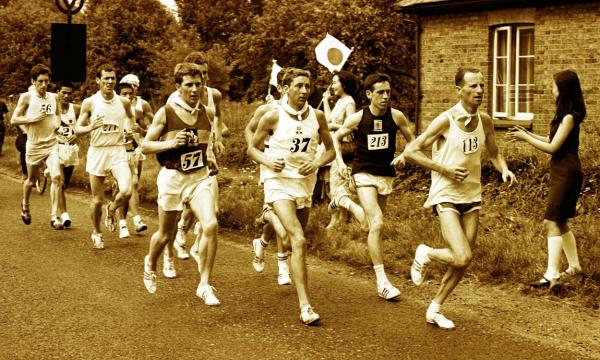 Jim Cregan moved to London in early 1960 in an effort to improve his running career and try to participate in international competition which he was denied when running in NACAI events in Ireland.  Jim changed his name for running purposes to Hogan, probably because he feared that he might not be allowed to run in British events because of his NACAI background.

He retained his original surname for everything outside athletics such as employment.

He joined one of the capital's top clubs, Polytechnic Harriers, which had no knowledge of his past.  His performances that summer were quite modest but this was perhaps not surprising as he was coping with his transfer from his rural scene to a big city environment.  I doubt if the club thought that Jim was anything other than a decent runner in the early stages of his membership.  An early employment was in a West London factory where he was required to work shifts including nights. hardly the most suitable set-up for one aspiring to sporting success.

By the 1960/61 winter, he had become more settled and started to thrive in the longer races of the cross country season.

His best run was in February 1961 when he placed 2nd in the Southern Counties 9 Miles Cross Country Championships at East Ewell behind Martin Hyman who had finished 9th in the 1960 Olympic 10000 metres.  Plenty of top British runners, including Gordon Pirie and Bruce Tulloh, finished behind him.  The most amazing thing about this run, though, was that he had been on the night shift that week and had worked through the previous night!

The result of his improving standard was that he was getting attention in athletics literature and people who knew the Irish scene recognised who he was from photos. It did not seem to matter. Nobody in authority took any action and Jim just continued as Hogan.

In 1962, Jim's 3 and 6 miles times improved to 13:33.6 and 28:07.2 and these performances gained him selection to represent Ireland in that year's European Championships in Bucharest.  Before the Championships, he had some injury problems and this might have been a factor in him failing to finish in both events.

Around 1962, a Polytechnic Harriers member who worked in the City with a big insurance company managed to get Jim a routine job with his firm which proved more satisfactory for his running. He stayed there a couple years and then got a groundsman's job with the local Council's parks department which he enjoyed.

The Council was particularly generous in granting him time off to compete in international events.

In 1963, he had become one of the top 6-milers in the UK, a situation that continued right through to 1968.  That year he won the national Inter-Counties Championship over the distance and placed 2nd to Ron Hill in the AAA Championships in 27:54.2, his first sub-28:00 clocking.

Much of 1964 proved good for him.  In March, representing Ireland, he came 5th in the International Cross Country Championship held at Dublin's Leopardstown Racecourse just 23 seconds behind the winner Arizmendi of Spain.  There were some obstacles on the course and Jim had difficulty crossing them losing time on each occasion. He claimed that without the obstacles he would have won the race!  The AAA 6 Miles Championship in July was a high quality race.  Jim was the main pacemaker helped by Ron Hill.  Jim did not have great basic speed and throughout his track career this caused him problems in the final stages of races.

Jim's AAA run resulted in selection for Ireland in the 10000 metres at that year's Tokyo Olympics and there were hopes of a great performance from him.  It was not to materialise.  Suffering from severe stitch, he failed to finish.  Interesting that the 3 Britons in the event, Bullivant, Hill and Murray, also had poor runs.

Perhaps they had peaked too early in the season at the AAA Championships.

Late in the Games, Jim was also entered in the marathon.  He had never run the distance but there were many good judges in the sport who felt that his relentless front running indicated that here was a future star in the event. He proved them right on the day when he took on the great Abebe Bikila for 20 miles before fading and dropping out at 23 miles completely dehydrated.  There was much less knowledge in those days about the food and drink requirements of the marathon runner and Jim knew little about them.  There were some criticisms of him for dropping out yet again but he received much praise from top runners throughout the world.  Jim has stated that this was one of his greatest runs.

Jim was a particularly good runner in road relays.  There were few runners who could match his ability in these events where one is often running considerable distances alone.  In the mid-1960s, he went with Belgrave Harriers on a club athletic holiday in Germany.  Also at the holiday base were members of the Blackpool club.  While there, the 2 clubs set up a road relay between teams from the clubs.  Jim, not a member of either club, decided to run the complete race distance of about 12 miles on his own and  beat all the relay teams!

Jim did not bother with the marathon again until 1966 but he then made it his priority.

The Polytechnic Marathon from Windsor to Chiswick was the trial race for the Commonwealth Games and European Games marathons to be held later that summer.

As usual, Jim made much of the pace and nearing the end he had dropped most of his main rivals like Hill, Kilby, Alder, Adcocks etc. and was accompanied only by Graham Taylor.  Taylor had been a good junior and, aged just 21, was only just old enough to run the distance under the rules at the time.  Reaching the track at Chiswick with just one lap of the track to go, Jim suffered the same experience that he had so often in track races.  Taylor exploded and covered the final quarter mile of the marathon in 63.6 seconds (!), finishing with a time of 2:19:04. Jim trailed in 23 seconds later.  Ron Hill finished 3rd in 2:20:55.

The first 3 to finish in the 1966 Polytechnic Marathon were selected to run for GB in the European Championships Marathon in Budapest in September.  Jim's training had gone very well and he went into the race full of confidence. This was not misplaced and he won comfortably, finishing about 1:40 ahead of the next man in 2:20::04.  Post-race he said everything went well and that he was not even breathing heavily at 25 miles, just cruising as though out on an easy training run!  His one regret was that it was not the Olympics.  He felt that he could have beaten anybody that day.  The other Britons, Ron Hill and Graham Taylor finished well down the field.

1968 was Olympic year and Jim entered the summer in good shape.  However, general standards were improving and new faces were appearing on the scene.  He set a new PB of 27:32.74 in the AAA 6 miles Championship but this was only good enough for 5th as winner Tim Johnston set a new European record of 27:22.2.

Shortly afterwards he ran in the Olympic Marathon Trial at Cwmbran.  He and Ron Hill set a fast pace from the start and had a considerable lead at 10 miles which was reached in 49:35.  They passed 20 miles in about 1:41:00 but had by then been joined by Johnston, Adcocks and Alder.  Hogan and Hill paid for their extravagant early pace and failed to place in the first 3.  Hill finished 4th and Hogan dropped out at 23 miles.  Winner was Johnston in 2:15:26.

Jim did gain selection for the 10000m at the Olympics in Mexico City.  However, like many others he suffered because of the high altitude and finished 27th in the race.

1969 was Jim's last season and he was no longer one of the leading British runners although he had very creditable season best times of 14:03.2 for 5000 metres and 29:10.6 for 10000 metres.  He also ran in 2 marathons.  On 30th May he ran in the Antwerp Marathon in which Derek Clayton (Australia) set a wonderful new world record of 2:08:33.6 which stood for 12 years.  Jim was a distant 13th in 2:22:58 with several Britons in front of him.  He ran his last marathon 2 months later at Manchester.  This was the Maxol marathon which included the European Championships trial.  On an exceptioally hot day, Ron Hill ran brillianly to clock 2:13:42 and beat Derek Clayton by about 2 minutes.  Jim suffered a leg injury and dropped out at 14 miles.

The high standards reached by Jim through his career can he seen from an examination of his PBs:

Jim lived in Chiswick throughout his English running career.  Apparently, a saying emerged in the area that "only 2 good things came out of Ireland in the 1960s: ARKLE and JIM HOGAN".  Jim heard this and smiled.  He was a life-long racing fan and, like the horse racing fraternity in general, he was a great admirer of this wonderful horse.  He undoubtedly enjoyed the compliment linking him to Arkle.

In  the 1970s, he and his wife Mary, moved to Wellingborough in the Midlands.  He kept in touch with many of the friends he had made in athletics.  Upon attaining  the age of 50 in 1983, he made a comeback and quickly reached a good standard again.

In the Autumn of that year, he went to the World Veterans Championships in Puerto Rico.  In hot and steamy conditions, he won 2 gold medals in the M50 category - in the 5000 metres and the cross country event.  His comeback did not last long.  He became frustrated at getting a succession of injuries and called it a day.

In 1995, Jim and Mary returned to Ireland and Jim was involved in training race horses.  His daily riding and frequent easy running meant that he kept in good shape.

He was weighing no more than in his athletics heyday.  He was a great friend od Dave Bedford, director of the London marathon and former world 10000m record holder.

Dave invited Jim and all the other previous British International Marathon medallists to the London Marathon each year for a get-together.  Jim really enjoyed those occasions.  Near the end of his life, Jim's health deteriorated and he spent his last days in a nursing home.

He got a great lift when Dave Bedford took the trouble to come from England to see him in the Home.

This article is original research by a good friend of Athenry AC. If it is used, please reference the author as he asserts his copyright over it.