Published in Other News on 7th March 2018 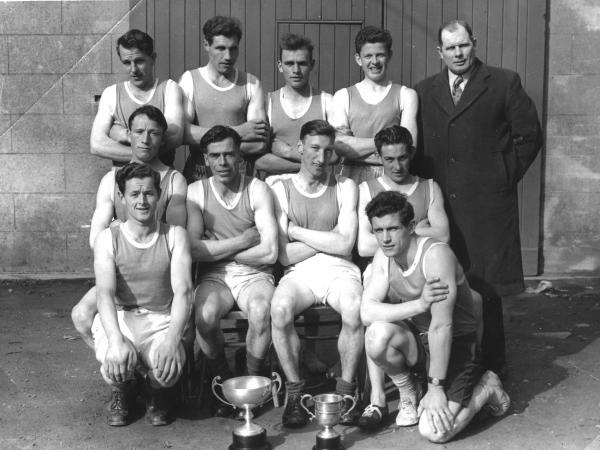 Runners in Athenry have heard the news of the recent passing of former athlete Kevin Ryan with great sadness. Kevin was undoubtedly one of the greats of Galway Athletics over the last 100 years and although few of us knew Kevin personally, the family tradition for excellence in athletics has been ably maintained by his son Gerry in more recent times.

The article reprinted below was originally contributed by Kevin to the history of Derrydonnell AC that was compiled by his fellow runner, Tommy Madden (RIP) and Mick Rice of Athenry AC. We publish it again here so that today’s runners may have some appreciation for the tradition of excellence and bravery in sport that Kevin and others have established, and that we can only hope to emulate.

Kevin Ryan may well have been the very first runner to cross a finishing line in the colours of Derrydonnell AC in December 1954. In subsequent years he was to become an integral part of the Derrydonnell ‘machine’ that dominated cross-country running in the West of Ireland. Although he first acquired his taste for athletics whilst working with Bord na Mona, he would go on to realise his full potential as an athlete in the famous colours of Derrydonnell AC.

“My name is Kevin Ryan and I started running and participating in athletics when I was just fifteen years old. At that time I wasn’t a member of any club, or was ‘unattached’, as they say. I had competed in the sports days that were organised by the company that I worked for, Bord na Mona, but that was many years ago. In the early years of its development Bord na Mona had a lot of people in employment all around the country. At about that time the company decided to have their own recreation centre and sports field at Attymon near Athenry. Many races were organised there over shorter distances, mainly 800 yards, one mile and three miles. I would also regularly compete in other track and field races around Galway city and county.

I was selected by the company to compete in sports against other Bord na Mona teams from Mayo and Longford. It was then that I knew that I had an interest in the sport. Winning prizes at these sports, and being told that I was a good prospect, made me more determined to carry on running. I kept going to the various ‘sports’ and winning some races until I decided to join an NACA athletic club.

I met up with Tommy Madden, founder of the Derrydonnell Athletic Club, and Willie Morris and they asked me if I would like to join the club. This was the right time for me to join the club because I was at the right age for running cross-country. In those days the Galway, Connaught and All Ireland senior championships were held over a distance of nine miles, which would include stone walls, ditches and ploughed fields all of which would have to be cleared by the runners at various stages. Having a nice standard set for myself, I was lucky enough to have joined up with the club that would be so successful throughout its reign. I had a younger brother Joe who also joined with Derrydonnell AC some years later and who helped me out in training. Every so often we would cycle to training and meetings of the club, which were held at different locations around the county. Cross-country running was the main ‘feature sport’ in those days and would have been more popular than road racing.

Running in all the races with the club was my biggest priority and luckily I didn't miss out on any of the main achievements of the club. My memories of the sheer enjoyment of running races with the club are clearer than specific details of what I won with the club. As I was usually fortunate enough to be on the winning side, I got into the habit of letting those victories pass by unnoticed. It is now only that I have a better picture of past achievements.

I was on the Derrydonnell team that won the County Galway Cross-Country Championships for thirteen years in succession and the Connaught Cross-Country championship twelve times. During that period I won the Galway and Connaught titles twice as an individual and placed second in the All Ireland Junior championships.

In 1959 in Dunleer, the Galway team won gold medals.  I finished in the scoring team and all the Galway team ran well that day. In 1960 I was also on the team that won the All Ireland in Limerick. In 1966 in Dromoland, Co Clare I was fifth home on a tough, fast course with a lot of high fences to be jumped. Galway won the team medals that day as well.

In 1966 a relay race was staged between Derrydonnell AC and Donore Harriers. Derrydonnell were a part of the NACA but Donore were an AAU Club. The race was held between Ballinasloe and Galway on the 1st May 1966. Although Donore won the relay race, on the day my own running went well for me and I felt great at the finish. History was made that day as both bodies achieved international recognition for all Irish athletes.

In March 1961 I traveled to New York with a party of nine Derrydonnell athletes by plane to compete in a serious of cross country and road races over there. Our first competitive race was a five-mile road race against a strong American team that included Browning Ross who was a top American runner who held world records for various distances at the time. The Derrydonnell team was well up in the team award and our best runner, Willie Morris, was just piped by the winner a few yards from the finish. Competing in other races against the best U.S. runners was no easy task. All in all, our team just about held it own in that series of races, with the Americans winning three races and the Derrydonnell team winning two.

Traveling around New York and other cities sight-seeing during that three-week stay was a great experience. The Galwaymen’s Association in New York made us very welcome arranging our stay in the Henry Hudson Hotel, as it was called back them. The also arranged for the Derrydonnell team to march in the St Patrick's Day parade while were there. The team was invited to many social functions at which they were presented with the various prizes they won. Another highlight of the trip was when the team visited the Mayor of New York, by kind permission from the Mayor of Galway, which was indeed a great occasion. It was sad to have to leave the country so soon. We had three weeks of happy times, but there was a job to be done back home which was to compete in the Connaught cross-country championships in Tuam. This was the type of spirit that made the club so successful. Looking back over all my years in athletics, I would do it all over again.”