Published in Results on 9th April 2006 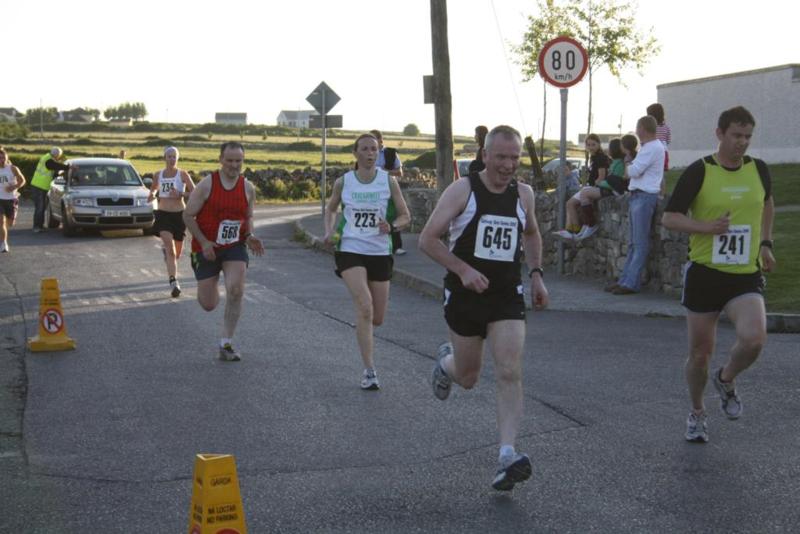 The 22nd Michael (Sonny) Murphy Memorial 10 mile road race and 10k fun walk which was held in ideal weather conditions the 220 competitors from all parts of Ireland competiting in the 10 mile and a record number of walkers 140 taking part in the 10k fun walk.

Gerry Ryan Galway City Harriers dominated this race he was in the leading pack and at the mile mark he broke away and came home two and half minutes ahead of John Byrne Mayo with a winning time of (51mins . 00secs) with Dermot Galvin St Johns third.

Wheelchair athlete Gerry Ford from Blarney covered the Ten Mile in a very good time of (1hour . 21mins . 23secs) and the first Local athlete was Ambrose Heagney in (64mins . 19secs) with Tracy Guilfoyle the first Local girl in (67mins . 04secs).

The beautiful sunny afternoon attracted a massive turnout of athletes almost 230 from all over Ireland with four athletes making and early break before the one mile mark that included two Clare athletes Dermot Galvin St Johns, James Mc Intyre Tulla along with John Byrne Mayo and Gerry Ryan Galway City Harriers and all four going through the mile mark in (5mins . 05secs) and after this mile marker Gerry Ryan picked up the tempo and opened up a twenty metre lead over the next two miles as he went through the 3 mile mark in (15 mins . 15secs) and the chasing trio were settling in with the next chasing group included a number Clare athletes all battling for major honours in the masters Eugene Moynihan Marian in the O/45’s and Joe O’Sullivan Bandon, Mike Solan Tulla in the O/40’s along with Martin Corcoran Loughrea, Tom Blackburn Bilboa, and Keith Ryan Limerick and the leader Gerry Ryan was approaching half way and he went through the 5 mile mark in (25mins . 25secs) and he had a good thirty seconds lead John Byrne and Dermot Galvin with James Mc Intyre showing some strain and drifting off the pace and they made their towards the Village of Corofin.
Tulla and Galway City Harriers were packing well for the Team Award with Bilboa, Marian and Kilmurry Ibrickane/North Clare all battling for the minor placings.

The leader Gerry Ryan running in his first ever Kilnaboy 10 mile was in full flight going through Corofin Village and with two miles remaining he was increasing his lead on the uphill stretch and he power his way to mighty victory and taking the Michael Sonny Murphy Trophy for the first time with a time of (51mins . 00secs) with John Byrne Mayo finish strong to take second in (53mins . 23secs) and the first Clare athlete in third Dermot Galvin St Johns in (53mins . 49secs) and James Mc Intyre battled all the way to the finish to hold onto 4th place with the leading master O/40 5th Keith Ryan Limerick and 6th the top master O/45 Eugene Moynihan Marian.
Galway City Harriers taking the Team Title on (70pts) after a close battle with Tulla on (77pts) third Bilboa (112pts) and fourth Kilmurry Ibrickane/North Clare on (121pts)

Gerard Mullane Bilboa who came through the big field in fine style to take the O/50’s title with John Harty Thurles Crokes taking the O/55’s and the O/60 going to George Webb Rising Sun.

At the three mile mark three athletes were starting to pull away from the rest of the field Mary Sweeney was forcing the pace and Veronica Colleran was right on her shoulder with Tracy Guilfoyle settling in and covering every move by the leaders and Orla Tuohy was leading the next chasing group and they made their towards the five mile mark and two more Clare athletes were making good progress towards the leaders Frances Guilfoyle Kilnaboy and Loretta Duggan St Marys.

The leading trio were now well passed the half way point and Veronica Colleran was starting to make a break for home where she was getting great support from all the walkers as she made a decisive break going through the village of Corofin and going towards the 8 mile mark she started to open up a good lead on Mary Sweeney with Tracy Guilfoyle being well supported by all the walkers for the final two miles but their was never any pressure on the leader as she raced away to a mighty victory with a time of (63mins . 58secs) from a former title holder Mary Sweeney (64mins . 50secs) and biggest chear of the day came when Tracy Guilfoyle from the local Club crossed the line in third spot in (67mins . 04secs) with Orla Tuohy 4th Maura Dervin Mullingar Harriers 5th and Fiona Hickey Youghal 6th.

The Team contest St Finbarrs packed well with their scoring three in the top thirtheen for a total of (22pts) second were the host club Kilnaboy on (33pts) third West Waterford on (42pts) and 4th Kilmurry Ibrickane/North Clare on (70pts).