Published in Results on 15th October 2012 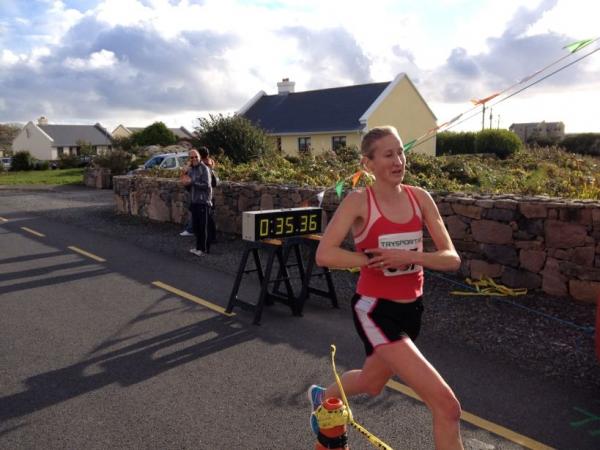 Spanish runner, Jaime Lobo, set a new course record at the Conamara 10k on a glorious day in Carna last Saturday.  Lobo won in 34:17 on a very scenic coastal course, the second year of a race that saw much faster race times than 2011.  He was followed to second by Gearóid Hynes, and  Richard Farnan of Galway City Harriers finished third in 35:11.

Irish running legend, Catherina McKiernan defended her title from last year and shaved almost two minutes from her 2011 time to set a new women’s course record of 35:36.  Local woman, Niamh Ní Chuaig, who lives in Barcelona and who travelled from Spain for the race, finished second and Helen Carr of Raheny Shamrocks finished third.

The race saw 153 runners finish, with a mix of local entrants, club runners from around the country and a sprinkling of international visitors.

“We were delighted with this year’s race and it’s great to see the standard of running getting higher and higher,” said race director, Rónán Mac Con Iomaire.  “The feedback from athletes was very positive and we are very happy that the investment we put into ensuring the participants had a great experience paid off on the day.”

The Conamara 10k is organised by Connemara-based triathlon club, TríSpórt.  Among the events were a series of short races for children, which saw up to 50 youngsters take part.  Next year’s race has been scheduled for October 12, 2013.

Results are attached as PDF and winners are below: