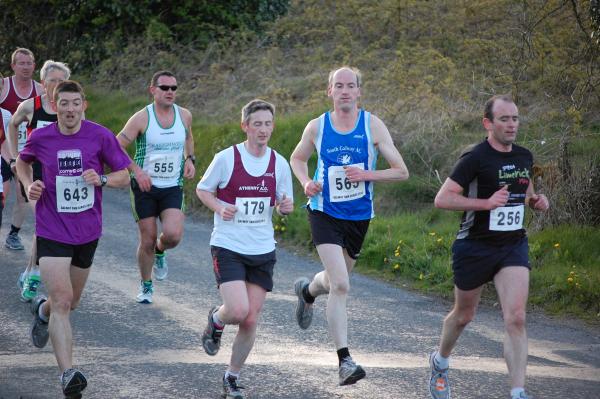 The Claregalway leg of the Galway 5k Series again brought out big numbers with just over 600 runners completing the run. The winning time was considerably better than last week's Athenry leg as Peter O'Sullivan recorded a great 16:02 to win by a good margin from Billy King with Enda Mannion in third. Our Sinead Foran was second among the women, well done again.

I counted 75 Athenry runners among the official list, correct me if I am wrong. All the helpers from last week seem to have stayed the course and run this week. Mairead Sullivan broke her PB again with 22:22, at this rate she will be sub-20 by the last run in Tuam. Five Athenry runners clustered just below the 24 minute mark, no doubt a savage tussle with no holds barred during the race and all smiles afterwards. They included Frank Noone, George Livanos, Jacqueline Hayes, the ranging new member Martin Moloney, and Janet Clancy.

Deirdre Quinn ran for two while Jane-Anne Meehan came back after a brief respite to do a great 20:24.

Well done and on to Loughrea next Tuesday. Results at http://www.redtagtiming.com/.