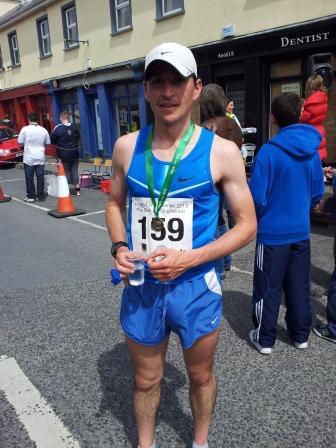 The 2nd instalment of the Mayfly 10k Challenge, took place on Sunday 26th May 2013 with blue skies and sunshine greeting the participants to the village of Oughterard. 195 participants registered for the event, which included Fit4Life members from the newly formed Corrib Athletic Club who were embarking on their first race, while an experienced international athlete succeeded in signing on without being recognised!!  With last year’s winner, Brian Bruton, GCH, not present and 2012 2nd place Brian O’ Connor, carrying an injury, the race was wide open.  There was a festival like atmosphere around the village, as many of the locals came out to observe the wave of lycra which had hit the streets.  The race began at 1:30, and the multi-coloured field ran through the town to much admiration and applause.  The course was a challenging one, with a number of climbs in the early kilometres renowned for causing havoc in lactic acid production. One person’s challenging is another man’s picturesque, and both words could describe the course, with scenic views of the boats on Lough Corrib mayfly fishing a welcome distraction from the gradient in the early part of the race.

After the first kilometre, the runners were well spread out, with a number of local runners featuring at the head of affairs. Christopher McGrath, GCH, Ray Somers, Athenry AC, Michael Rocke, Castlebar, Brian O’ Connor, GCH and Alan O’ Shea, Cork led the field. Updates came through to the finish courtesy of many of the marshalls on the course and also from Padraig Benson, of the West Coast Wheelers, who kindly offered to lead out the runners  and stay with our leading male. At 6km, a time gap of 2 minutes had opened up between the 1st and 2nd placed runners on the course, with Cork’s Alan O’ Shea to the front.  It was only at this stage that Alan Burke of Athenry AC who was present in an official capacity made the organisers aware of the identity of the leader, a previous winner of the Cork city marathon.  Alan finished the race in a time of 33:45.  Second place was taken by Christopher McGrath, GCH, in a time of 37:29 who was followed closely home by Athenry’s Ray Somers in 37:47.  The first lady, Sinead Brody, GCH, came home in a time of 41:46 , with Emer O’ Connell, of Corrib Athletic Club taking 2nd in 45:49 and Martha Linnane of Galway Tri Club taking 3rd place.

The weather on the day was certainly much more suitable for running in comparison to last year’s 28° heatwave, and many people achieved PB’S. For many paticipants, this event was not about PB’s but more about finishing the 10k which was achieved by all who began the race.  The weather held, and allowed the participants to enjoy the BBQ hosted by the Boat Inn on the Square in Oughterard. It was at this point that race winner, Alan O’ Shea, informed the organisers that he was merely passing through Oughterard on his way home from Mayo, saw the signs for the race and pulled in with the family!! He failed to mention his success the previous day in winning the River Moy Half-Marathon in Ballina!  Local DJ Aidan Kenny kept the crowd entertained and the prize giving was held outside in glorious sunshine. The event was a success for the 2nd year running and hopefully is now establishing itself on the calendar as a well organised fun for all event.  The organisers would like to thank the County Council, Gala, Faherty’s Bar and the Boat Inn for their support and sponsorship.  These events could not take place without the help of the many volunteers who helped out with registration, manned water stations and corners and anybody who helped out in the organising of the event.  Finally a thank you to all the competitors, without whom, there would be no event.  With all the proceeds of the event going to the development of a Community park, Corribdale Park, this event is a crucial part of the funding of the local amenity.