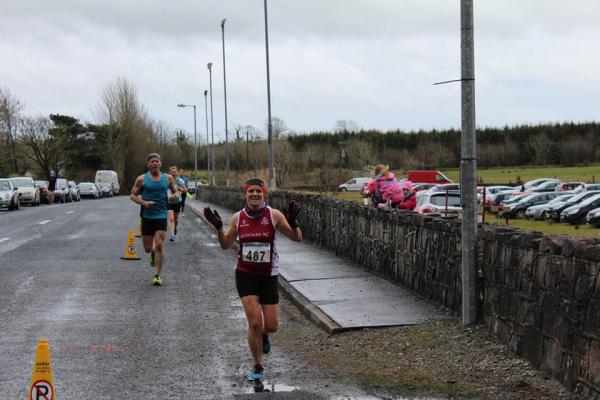 Colemanstown Soccer Club always put on a great race and they kept the ball rolling in 2016 with another great day out for the annual 10K. This was year 6 of the run and sometime between the kids race and the start of the main race the marquee had a fit of giggles and decided that R Kelly might have been on to something. Turns out though that marquees can't fly, or at least not for very long or very far thankfully. The post-race goodies were saved and moved to the clubhouse, a great example of the behind the scenes work that goes on at races.

The race itself is a scenic 10K route and the start line being around 1K from the car park is a great way to get a warm-up in whether you like it or not. A shower just before the race start had the runners hiding behind ambulances and hedges, but it was short lived and after a brief message from the organisers we were off.

The first kilometre was mostly flat and brought the runners past what would be a very welcome sight later on – the finish line. Another 3K with a crosswind and a gradual incline led to a left hand turn and on paper the toughest part of the course was now history. This next section was the fastest and these mid-race kilometres flew with the wind at our backs. An early crosswind and a tailwind can only mean one thing though and the last few kilometres were into a tough headwind that made a fast finish unlikely. This was not a day for PBs but a lot of Athenry AC runners went very well and there were more PBs than might have been expected. With many in the club doing April marathons it was a great sign that training is paying off and many members ran their fastest ever 10K.

First over the line was Paul Conlon in 36:11 with Mark Walsh (Leevale AC) 9 seconds back in second place. Two Athenry runners were next home in identical times of 36:35. The official results show Gearoid Rohan in 3rd place with Jane Ann Meehan in 4th but there was nothing between them. Both had PBs and both are looking great for their return to the Manchester marathon in a couple of weeks, a race where they both smashed the sub3 for the first time last year.

Jane Ann controlled the women's race from start to finish with Sharon Grant 2nd in 39:13 and another Athenry AC athlete Deirdre Grady third in 40:31.

All the talk after the race was about the tough finish into the wind, but the superb post-race cakes and sandwiches (and soup!) more than made up for it.

This race was well attended by Athenry AC as usual with over 30 club members making the trip to Colemanstown. A note from the organisers attached to the race bibs read “Whether this is your first year to participate or you are a returning runner we sincerely thank you for taking part and hope you greatly enjoy the event. We earnestly hope you will return to run this event again next year.”

We did and we will!

Full results are at www.redtagtiming.com/results/Colemanstown10km_2016.pdf