Published in Results on 13th February 2018

The snow melted away but conditions were still very soft and muddy for the cross country events. Eight members of Athenry AC took part in various categories.

National Cross Country championship: Getting Stuck In
by Mary Kealy

Saturday February 10th was like most others: wet, wet, wet. But it was also the eve of  the National  Cross Country Championships, due to be held in the Kilcornan Estate in Clarenbridge.  I had a sneak peak at the course during the week (not too bad) until the rain began. Ah well can't do anything about the weather.

Sunday dawned: freezing conditions with snow and sleet. Luckily for us Galway people, we didn’t have far to travel. Unlike the clubs that came from as far as Donegal and Cork - bus loads. Bad news in the form of a text from one of our dedicated ladies team members: she sustained an injury during the week so was unable to compete. Only three of us left, but we would soldier on. On arrival at Kilcornan things were not looking up. The venue resembled the Ploughing Championships on a bad day: the worst conditions ever! However, it was a hive of activity and a rainbow of colours with most of the country's best runners jogging around happily.

The day started with the juvenile races, then the master women with men 0/65 followed by intermediate women and men. The place getting ploughed up more and more as the day went by. My race (with Athenry members Maggie Vahey, Aoife Callan, myself, Philip Magnier and Martin Keane) was full of super experienced cross country master runners.

We lined up at the start with the best of them. The gun went off Aoife and Maggie shot off but I’m afraid I was too slow and I was unable to gain the lost ground. The muck on the course made it almost impossible to get going with lots of spikes getting lost. (Memo: Practice in order before future attempts).

Aoife was the first Athenry person home followed by Maggie, myself, Philip and Martin. Well done to us all in such trying conditions and lack of experience. I think we all agreed afterwards that although we lacked experience, endured the bad weather  and ran in severe mucky conditions we did enjoy it.

We hope to give it a better shot in the future by roping in some more people and getting lots of practice. 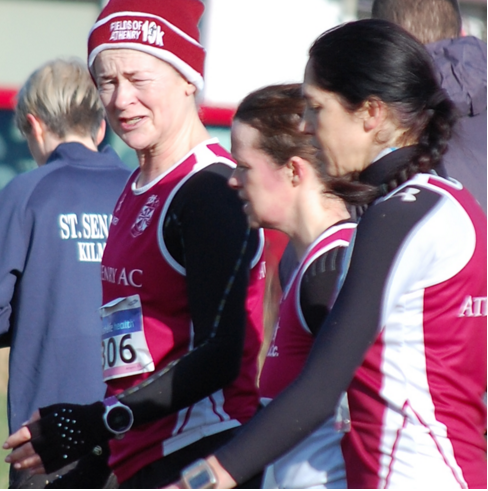