Published in Members on 2nd October 2006 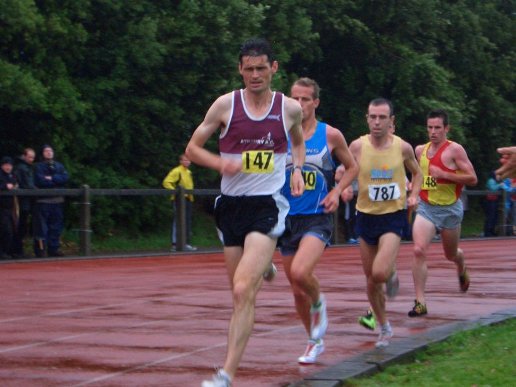 1. What running shoes do you train in?

2. How many miles did you run last week?

4. Where's you favourite place to train?

The Phoenix Park. It has everything. We're desperately short on good parkland in the west.

5. What's your favourite race or event each year?

National Inter-clubs Cross Country. It is the blue riband event for distance runners in Ireland.

6. What annoys you most at races?

Racing when I know I'm not prepared.

7. What race, that you haven't yet run, would you most like to take
part in?

Dream Mile at the Bislett Games - not going to happen!!

8. What was your best-ever running performance?

Winning the Schools International Cross Country at Lough Key Forest Park in 1991. To this day I am completely baffled as to how it felt so easy.

9. What was your worst-ever running performance?

The Irish Schools Cross Country 11 months after answer to question 8.
Training had not been going well so I attempted to turn it around by replicating my build up to Schools International 11 months earlier (I had been injured and hadn't run for a week in the build up to that one) so I didn't run a step for a week. It backfired badly and I finished way down the field.

10. What's the strangest thing that you've ever seen on a training
run?

Pulled a guy out of the Liffey not very long ago. He was extremely drunk and about to try to swim across.

12. Who would you most enjoy beating in a sprint for the line?

13. What was the best bit of training advice you were ever given?

Training just below your lactate threshold will give most improvement gains

14. In ten years time will you still be running?

Ten years ago I didn't think I'd still be running now.

15. If for some reason you were told you could never run again, how
do you think you'd react?

16. Have you ever been bitten by a dog while running?

No. I've managed to retain a tiny number of fast twitch fibres which have
baled me out on a couple of close calls.

17. Have you ever had to stop for an emergency 'Paula' during a
race?

No, but I live in constant fear of doing so.

Guinness. It counts as food.

19. Most embarrassing ever running-related moment?

Does an entire four years count as a moment?

20. The greatest Irish Athlete of all time is/was?

Sonia in her hay-day, pushed hard by Gary Thornton.