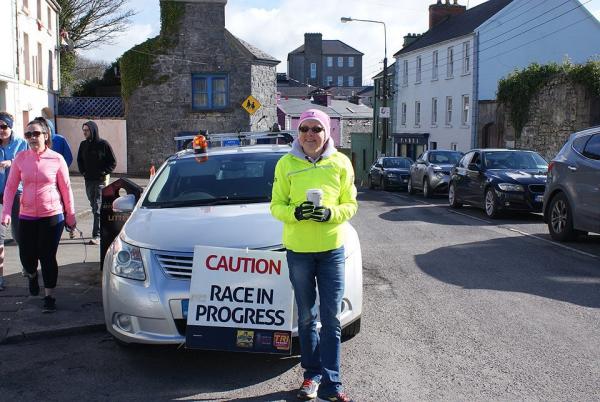 2.      Briefly, what started you running? I used to work alongside Elaine Quinn & she was forever talking about running & how many miles she had done at the weekend etc etc, so got me thinking maybe I can do this running thing!!!! It was Elaine that told me about the Fit4Life programme that existed in Athenry AC, now it took me six months to sum up the courage to join as I had no running experience at all.

4.      What piece of running gear/apparel is your most prized possession? Apart from my garmin, my t-shirt from my first Dublin City Marathon 2012.

6.      What event/race that you haven’t done would you most like to compete in?  Probably the Paris Marathon

7.      What performance/race do you take most pride in? Completing my first marathon, as I only set out with the intention of being able to do 5k.

8.      Is there any performance/race that you would rather forget?  One Saturday morning on a 10 mile run being doubled over with pain & had to walk most of it, needless to say I was out injured for a few months after. (nothing worse than been that far out & having to walk most of the way back to the car park, a lot of cursing & swearing went on that morning.

9.      Where is your favourite place to train?  Coole woods was a lovely place but since the bad storms it’s no longer possible. When I train on my own I run around where I live which is approx. 3 miles from Craughwell village in the heart of the countryside, with only the sheep for company.

10.  What type of training is your “favourite”? (Speed,Tempo,Short,Long Run,Slow????)  Let’s face it, WHO looks forward to speed,tempo or long runs!!!!!!!! But once we are on the last rep in the speed session or the last 10 min of tempo, we are very happy & really glad that we made the effort to get out & do it even in the pouring rain & freezing cold, & of course the chat & craic in the car park after.

11.  Do you prefer solo or group training? I can do both.

12.  What’s the funniest/strangest thing you’ve seen or heard on a run? There have been a few but the one that stands out occurred only last week, I was running home from work (solo) a bit later than usual very nearly dark & just on the last 2k a car coming towards me full lights on…a farmer & dog in his tractor on my right, (the farmers around here don’t understand why you would be out running) so I moved in a little bit to my left ( not to get run over) only to be meet head on with a very large Billy Goat…..I got such a fright my heart rate went through the roof, thank goodness I was nearly home.

13.  If you were to give 1 piece of advice to a newcomer to running what would it be? Definitely join a local F4Life group & stick with it, yes you will have good day’s & bad day’s, but there’s nothing like that feeling when you cross the finish line be it 5k or marathon, you forget all the bad day’s, & all you can think of is when is the next one!!!

14.  What injury has caused you the most problems since you started running?

15.  Do you cross train? If yes what type?  We do core training twice a week.

16.  What is your most embarrassing running related incident? None

17.  Which club member would you most like to beat in a sprint to the line?  Anne Lyng

18.  Do you have a favourite current or past athlete that inspires you? Sonia O'Sullivan