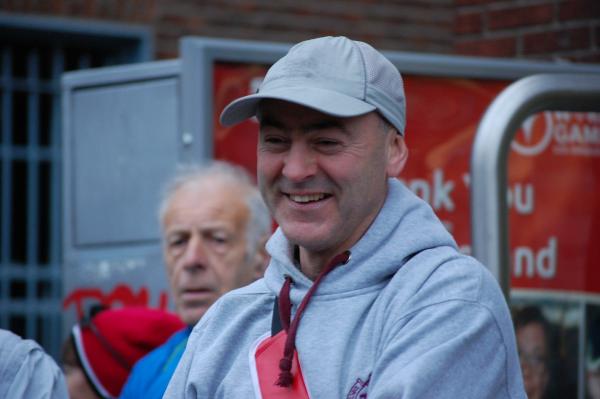 2.      Briefly, what started you running?  A friend of mine had taken it up so i joined him for a few runs

3.      What shoes do you train/race in?  At the moment Nike Lunarglide

4.      What piece of running gear/apparel is your most prized possession? Nothing really but i do like this year’s 10k hat

5.      What is your favourite event/race of the year?  Dublin in October

6.      What event/race that you haven’t done would you most like to compete in?  New York or Tokyo marathon

7.      What performance/race do you take most pride in? Beating Ray Somers in the Resolution run a few years ago. I was on fire that day :)

10.  What type of training is your “favourite”? (Speed,Tempo,Short,Long Run,Slow????)  Long and Slow

11.  Do you prefer solo or group training? Group

12.  What’s the funniest/strangest thing you’ve seen or heard on a run?  Well on my first Marathon at about 20 mile i was overtaken by a man dressed as a bear ? I was at crawling pace and he was so hot in the bear suit that he had the zipper at the back all the way down so i got a great view of his poorly fitting boxer shorts as he shuffled down the road.

13.  If you were to give 1 piece of advice to a newcomer to running what would it be? Join a Club

14.  What injury has caused you the most problems since you started running? The back is getting a lot of attention at the moment

15.  Do you cross train? If yes what type?  Ya I’ll try anything . I am a member of Predator Tri Club so i swim about twice a week, do turbo and long bike on Sunday. Yoga and Core with JA.

16.  What is your most embarrassing running related incident? Well: A long time ago on my first or second long run we were up to about 22/23 miles . We were new to going long so didn’t bother with water or fuel and as was the usual at that time we went out hard. Needless to say we were in bad shape near the end ( i remember being about a mile from home and could not see the road ).

17.  Which club member would you most like to beat in a sprint to the line? Over the years there have been a few and i like a bit of competition and craic but i would loved to have beaten OC in a road race

18.  Do you have a favourite current or past athlete that inspires you? Ya i remember watching  John Treacy’s marathon in Los Angeles in 1984 . He finished 2nd under 2.10 . Anyone who trains and races a Marathon to their best is fairly inspiring