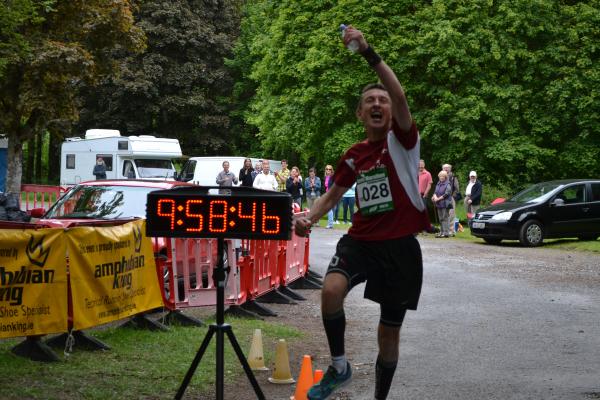 1.      How long have you been an Athenry AC member?  I joined in 2012, Frances joined in 2011 and was telling me about speed sessions on a Tuesday so I decided to join to do speed only. It was grand for the first few while I knew nobody but when I got to know people I got sucked into more and more sessions and then finally they convinced me to do Dublin.

2.      Briefly, what started you running?  I had always ran when I was in my teens and twenties. But then I when to London and discovered Alcohol and cigarettes and stopped running. We moved home and bought a house that looks out on the mountains and I just got the hankering to run in the mountains, it's a fantastic place to run.

4.      What piece of running gear/apparel is your most prized possession? None. But if you ask which thing I hate the most it`s that god damn watch. I`ve had 3 different types and hate them all. They're never on or are on the wrong screen or are about to die. And according to them I`m never running fast enough. They cause me nothing but pain.

5.      What is your favourite event/race of the year?  Dublin City Marathon

6.      What event/race that you haven’t done would you most like to compete in?  Multi-Day desert race

7.      What performance/race do you take most pride in? Probably Dublin last year I really had to talk myself into keeping going over the last 5 miles

9.      Where is your favourite place to train?  When I can the mountains but injuries have kept me on the flat for the last couple of years.

10.  What type of training is your “favourite”? (Speed,Tempo,Short,Long Run,Slow????)  Speed. Nothing like the feeling when it done.

11.  Do you prefer solo or group training? Group

12.  What’s the funniest/strangest thing you’ve seen or heard on a run?  One day myself and my sister were running up in the mountains. Cattle roam freely up there. We were on our way back down when about 20 of the cattle decided to join us.  It was like something you see in Pamplona at the bullrun and just as scary.

13.  If you were to give 1 piece of advice to a newcomer to running what would it be? Do core and stretching

14.  What injury has caused you the most problems since you started running? Groin injury, its been go on for over a year now and JaneAnn managed to get me through last year but I have done a really good job on it this time round so haven`t run since mid January. Hopefully I`ll be back running in another 3 weeks.

16.  What is your most embarrassing running related incident? The first time I decided to do the Saturday Morning run it was dark when I got dresses (I am not a morning person) I met everybody at 9 o'clock and started running. The run went grand but when I got back to the car park and we were doing some stretching I realised my shorts were on inside out.

17.  Which club member would you most like to beat in a sprint to the line?  Frank Burke every time, I wouldn`t care about the time as long as I`m in front of Frank.

18.  Do you have a favourite current or past athlete that inspires you? Eamon Coughlan I grew up watching him on the TV. He should have had at least 1 Olympic medal.