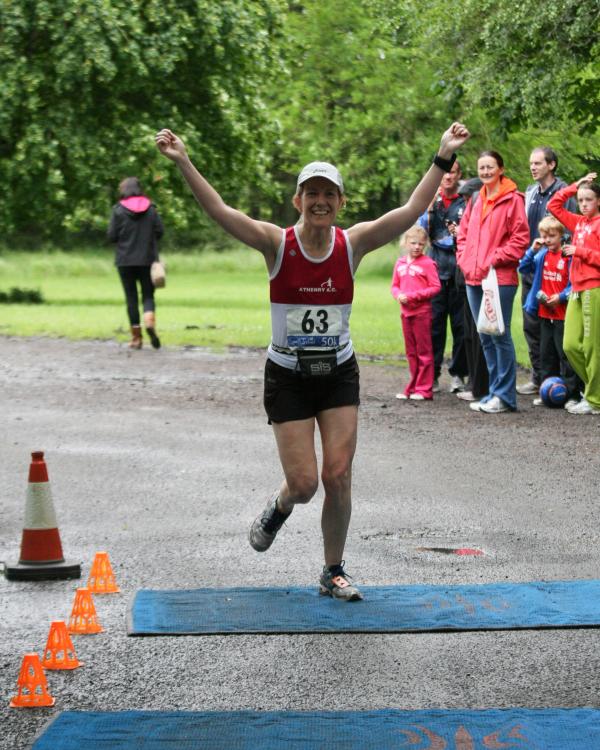 2.      Briefly, what started you running?  Myself and my sister in law walked the Women’s mini marathon one year and were so frustrated with the crowds we vowed we would run it the following year – However it did take 9 months to get started when I joined Alan Burkes Meet and Train group and the rest is history.

4.      What piece of running gear/apparel is your most prized possession? My Garmin watch and HR monitor has caused me lots of pain this year with HR training but I couldn’t be without them and my Athenry Ac singlet of course.

5.      What is your favourite event/race of the year?  On a yearly basis it would have to be the Dublin marathon but my best memories are from the Portumna 50k 2012 when a group of us trained for our first 50k together and celebrated in style that night . The Boston Marathon last year was the best running experience I have ever had – the only race I have ever done that I didn’t want to end.

6.      What event/race that you haven’t done would you most like to compete in?  The list is long –but if I had to pick one it would be the New York marathon.

7.      What performance/race do you take most pride in? Dublin 2013 – The year I got my marathon pb thanks to a brilliant pacing job by Jim Leahy – I’m surprised he is still talking to me :-)

8.      Is there any performance/race that you would rather forget?  Quite a few but the one that comes to mind every time is the national half marathon in Carlow a number of years ago. Someone suggested taking a gel before the race and with my dodgy stomach I should have known it was going to end in disaster – lets just say I spent the entire race looking for bathrooms and when I arrived at the finishing line I just stayed going to the amusement of the organisers and the shock of Dee Quinn who stood at the finishing line wondering had I lost the plot.

9.      Where is your favourite place to train?  Kilcornan Woods in Clarenbridge.

10.  What type of training is your “favourite”? (Speed,Tempo,Short,Long Run,Slow????)  I love speed when it’s done but I dread it every week – I love the weekly long run for the chat and the craic – Of course that’s when there is no heart rate training and the watch is your only company!!!

12.  What’s the funniest/strangest thing you’ve seen or heard on a run?  Not quite on a run but just before a race. At the Portumna 50k we were all newbies to this distance and weren’t quite sure on fuelling etc but one person wasn’t taking any chances – A large cardboard box arrived out of the car containing a box of gels (all 25 of them ) and a container of salt tablets and endless amounts of coke- She will remain nameless :-)

13.  If you were to give 1 piece of advice to a newcomer to running what would it be? I spent many of my earlier years involved with Fit 4 Life and the one piece of advice I would always give is you need to run slow enough so you can talk if you can’t talk you are going too fast.

14.  What injury has caused you the most problems since you started running? Thanks to Jane Ann I have never had any injury that put me off running for more than a few days – but I have lots of weak spots – Currently my glutes – Its strange the way they move around . Last year it was my back the year before my IT Band.

15.  Do you cross train? If yes what type?  Yes I do yoga twice a week and core and strength twice a week – Gave that triathlon stuff a try but not much craic or chat swimming up and down a pool for an hour.

16.  What is your most embarrassing running related incident? See question 8 for the incident in Carlow.

17.  Which club member would you most like to beat in a sprint to the line?  Do you really need to ask – FRANK of course it would be better than winning a race!!!!

18.  Do you have a favourite current or past athlete that inspires you? The runners that inspire me most are those who may not have achieved their goal but never give up and stay training and trying and eventually they always do – There are many in Athenry Ac who tick this box.

On an elite level I think Maria McCambridge is incredible – She didn’t make the cut for London but she continues to race to her max while most of those that did go to London seem to have disappeared from the sport.