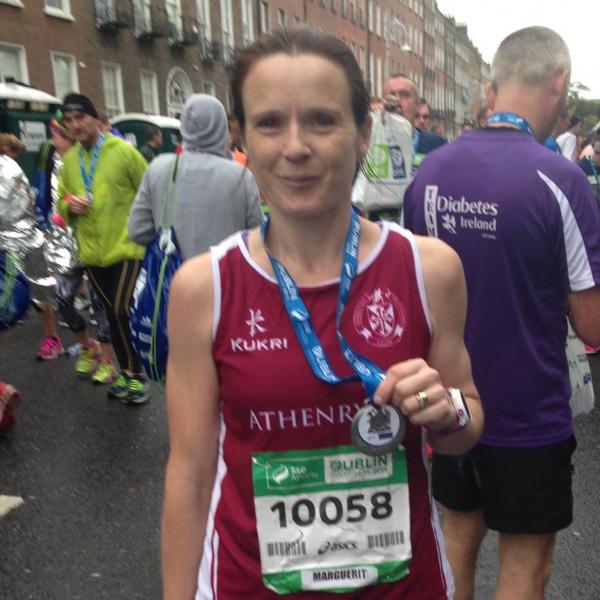 2.      Briefly, what started you running? Funny thing is i hated running or anybody that suggested i give it a go.  I wanted to shift a bit of weight but love my food, so knew i had to start some form of exercise as changing my food only brought me so far in losing the weight i had put on when having my kids. I started with walking but added in a bit of running to get home faster as i really hated exercise, it just went from there really.

4.      What piece of running gear/apparel is your most prized possession? Has to be my Garmin!

6.      What event/race that you haven’t done would you most like to compete in?  New York marathon.

8.      Is there any performance/race that you would rather forget?  All of the 5km series last year.....complete disaster every race,i really am not a 5km runner.

9.      Where is your favourite place to train?  Athenry of course, and every byroad off it.

10.  What type of training is your “favourite”? (Speed,Tempo,Short,Long Run,Slow????) Tempo for some strange reason!

12.  What’s the funniest/strangest thing you’ve seen or heard on a run?  Everything from nearly tripping over sonic the hedgehog in Dublin to all the conversations on our long runs...if we put as much effort into running as we do laughing we would be in Rio next year.

13.  If you were to give 1 piece of advice to a newcomer to running what would it be? Believe in yourself....Take advice from established club members. For me Jane Mangan and Frances Leahy pushed me to where i am today .

14.  What injury has caused you the most problems since you started running? I have been lucky enough up until now...few niggles along the way. But hamstring could be my downfall, time will tell.

15.  Do you cross train? If yes what type?  I love Kettlebells but have been advised against them for a few weeks until my abdominal muscles sort themselves out.

17.  Which club member would you most like to beat in a sprint to the line?  Has to be the one and only Donna Lane because she is not a bit competitive!!!!

18.  Do you have a favourite current or past athlete that inspires you? Apart from our own Jane Ann it has to be Mo Farah...how does anybody run that fast.