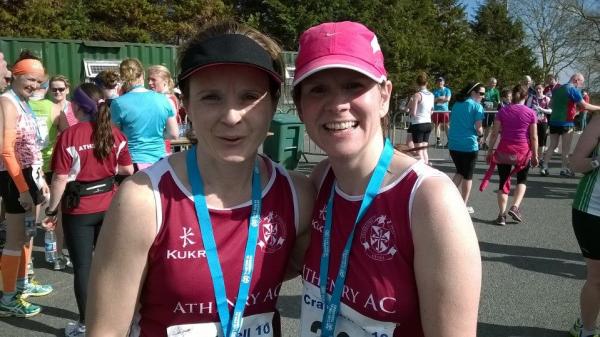 2.      Briefly, what started you running?  My asthma was progressively getting worse so my doctor suggested walking or running. I absolutely hated both, as both involved a bit of effort but my friend Brighid Cannon called to visit the next evening and said we were signing up for F4L so it all went from there.

3.      What shoes do you train/race in?  Saucony Omni. I 'briefly' changed to another brand because I 'liked' the colour ( I know Jane Ann, say no more) and boy did I pay for it with shin splints.

4.      What piece of running gear/apparel is your most prized possession? Well, I count her as my apparel  as I race with Marguerite Wilkinson, she keeps an eye on the watch at all times as I panic if I think we're going too fast. She has brought me through many a race so I suppose you could say she is 'my most prized possession'….just running of course!

5.      What is your favourite event/race of the year?  The Streets of Galway every time. The atmosphere and crowds are just fantastic.

6.      What event/race that you haven’t done would you most like to compete in?  The ‘New York Marathon’ but I don't think that will ever come to pass. I've seen the qualifying times and I'm afraid I could only ever dream of doing one of those.

7.      What performance/race do you take most pride in? It has to be the Athlone Half Marathon 2015. I beat my 1st half time by 15 minutes and enjoyed every minute of it.  After doing Kinvara (see no.8) I honestly thought I wasn't cut out for anything further than 10k.

8.      Is there any performance/race that you would rather forget?  My 1st half marathon in Kinvara 2015. It was unbelievably windy that day which didn't suit my asthma and coupled with nerves it was a complete disaster from start to finish.  I looked some sight at the finish line.  Although, this year I didn't look much better either. I think Kinvara doesn't suit me!

9.      Where is your favourite place to train?  Anywhere really around the roads of Athenry.

10.  What type of training is your “favourite”? (Speed,Tempo,Short,Long Run,Slow????)  I love them all once I've finished but if I had to pick one it's probably Tempo.

11.  Do you prefer solo or group training? Oh definitely group training.  Anyone that knows me knows I never shut up talking so obviously, I don't like solo.

12.  What’s the funniest/strangest thing you’ve seen or heard on a run?  I have such fantastic running buddies that there is always a funny story to laugh about every Saturday morning….something  funny happened to my husband out running one day but I'll let him tell that one when his time comes up for 20 questions.

13.  If you were to give 1 piece of advice to a newcomer to running what would it be? Definitely join F4L. I couldn't say enough about the leaders that were there when I started, full of encouragement and patient with each and every one of us and it still remains the same today.

14.  What injury has caused you the most problems since you started running? I've always had a few niggles with my back but I've certainly injured it this time!  I had just completed my long miles for the Manchester Marathon and my back just went.  I currently have a prolapse disc so cannot complete my 1st marathon next Sunday. I'm absolutely gutted but hopefully, there will another time.

15.  Do you cross train? If yes what type?  No, and perhaps that's why my back gave in but am starting Pilates shortly.

16.  What is your most embarrassing running related incident? Thankfully, none to date.

17.  Which club member would you most like to beat in a sprint to the line?  As some of you may be aware I'm noted to be a 'little' bit competitive when coming to the finish line so it would have to be any of my running buddies but if I had to pick one of them it would be without a doubt Caroline Freeney.  At a 'friendly' 5k last year I nearly tripped her in order to finish before her.

18.  Do you have a favourite current or past athlete that inspires you? It has to be for me, Jane Ann and Mick Rice.  I have never seen two people that just seem to glide when running.  I would honestly stand out in the rain all day long to watch those two. Plus it goes without saying all they have done for the club as well.

Full Marathon       To Be Completed (Hopefully)