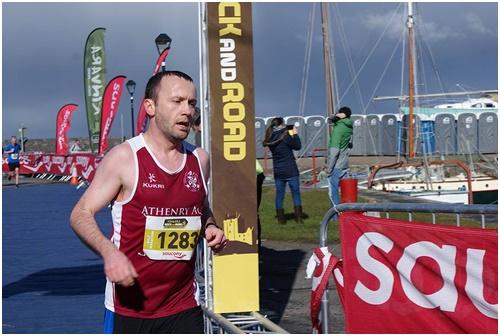 1.      How long have you been an Athenry AC member?  Just over two years, Jane Ann convinced me to join during a physio session. I only said yes to try and make the pain stop…it didn’t!!

2.      Briefly, what started you running?  I was getting married in 2013 and I wanted to try and shift some excess weight beforehand. I was surprised how addictive I found running and have kept at it since.

4.      What piece of running gear/apparel is your most prized possession? My Garmin Forerunner, if I forget it for a speed session I always go out too fast.

5.      What is your favourite event/race of the year?  I really enjoy the buzz of the 5k series as you always meet people at it that you may not have seen for a while.

6.      What event/race that you haven’t done would you most like to compete in?  Has to be the Dublin City Marathon. All you ever hear is such great reports about it, so it’s definitely one for the future.

8.      Is there any performance/race that you would rather forget?  The Athenry leg of the 5k series in 2014. I had a poor finish to the race and it just annoyed me loads. I haven’t been a fan of the course since, but Speedy ensures me that the new 5k course is a thing of beauty, so here’s to Athenry 5k in 2016!

9.      Where is your favourite place to train?  Narin Strand, at home in Donegal. On a nice sunny day, when the tide is out, it’s just a beautiful place to run, you just totally switch off and relax.

10.  What type of training is your “favourite”? (Speed,Tempo,Short,Long Run,Slow????)  It has to be the speed sessions. It’s a great feeling, when you know that you have emptied the tank at the end of the session.

11.  Do you prefer solo or group training? No real preference, quite happy to do a bit of both.

12.  What’s the funniest/strangest thing you’ve seen or heard on a run?  The strangest thing I’ve heard was whilst out running in Galway city. I was running on the footpath out at Galway Crystal one afternoon and you could quite clearly hear two people having their own workout in the trees beside the footpath!! Needless to say, I picked up the pace for a bit.

13.  If you were to give 1 piece of advice to a newcomer to running what would it be? Join a club, it makes training so much easier and it improves your times so much.

14.  What injury has caused you the most problems since you started running? I have a bit of a knee and a hip injury that is causing me problems at present, I’m hoping that it doesn’t persist for too long.

15.  Do you cross train? If yes what type?  Nope, unfortunately.

16.  What is your most embarrassing running related incident? I took a gel a couple of miles from the finish of my first half marathon in Limerick in 2014. Unfortunately, the gel didn’t really agree with me, so I grabbed my medal as I crossed the line and headed straight for the wheelie bins. You can figure the rest out for yourselves!

17.  Which club member would you most like to beat in a sprint to the line?  Nobody in particular, just whoever I can see in front of me.

18.  Do you have a favourite current or past athlete that inspires you? ? Sonia O’Sullivan, I just remember the air of excitement that was always around coming up to her big races.