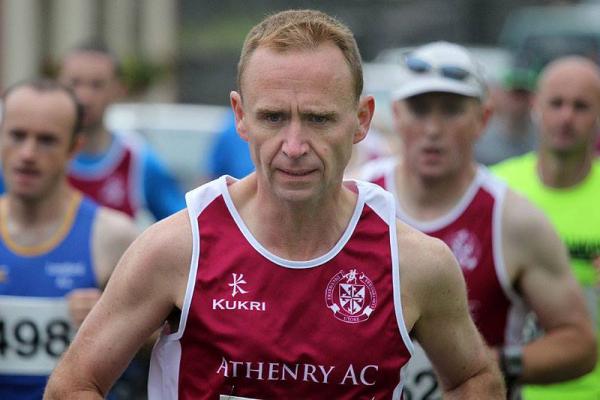 2.      Briefly, what started you running?  I was very overweight and was getting absolutely no exercise. I have arthritis as well and the extra weight and lack of exercise was making it worse. Decided one day to get out the door and try going for a run. Haven’t looked back since.

3.      What shoes do you train/race in?  Right now I’m back in Saucony Omni for training but I’ve used Brooks Adrenaline and Asics GT2000 series as well. For racing I use either Saucony Fastwitch, although I find the new ones very unresponsive or else the Adidas Adizero Tempo (my favourite)

4.      What piece of running gear/apparel is your most prized possession? It’s got to be the Athenry AC Singlet. Its great to see so many people wearing it at the start line of races. Although I did have a ‘lucky’ pair of shorts for a long time. Sadly they are no more.

5.      What is your favourite event/race of the year?  For me it has to be the Dublin Marathon. It’s the big club event of the year and once the 5K series is over you can see so many people's attention switch to it. All the different groups getting together for the long runs. Not only it the atmosphere leading up to it so special but the whole organisation and support on the day is second to none. Even on the days where things are not going well, or indeed totally pear shaped the support on the course just keeps you going.

6.      What event/race that you haven’t done would you most like to compete in?  Would love to give the 100K in Portumna a go sometime and I have to get over to London one of these years for the Marathon.

7.      What performance/race do you take most pride in? Connemara Ultra in 2014. First, and only, time going up to the distance. Had previously done a 50K in Portumna. It was something I had been thinking about for a couple of years and just decided to go and do it. Trained very hard for it including getting up to 2 X 22 miles per week for a couple of weeks with one of them loops down in Ryehill. Conditions on the day weren’t ideal to say the least but felt strong and stuck to the plan. Had hoped on a good day to get under 5:30 but managed to keep everything together over the last ½ marathon and signed off for a 5:17:20. Its also the only time I’ve managed to beat my brother in a race.

8.      Is there any performance/race that you would rather forget?  Oh there are so many. I think for most of us the days where things don't go to plan far out-number the days where everything goes right. I guess that's what makes the good days even better.

The big one though is Manchester Marathon just gone. I set myself an ambitious target at the start of the year of having a right good crack at a Sub 3. Training for the race had gone pretty well, it’s never 100% but I felt I was in with a shot of it of everything went to plan on the day. Worst case should have been well under 3:05 anyway.

After 3 miles though it was all over. Bad stomach cramps and a quick look at the heart rate showed it was up in my 10K range. Managed to hold it roughly together up to half way but after that it just fell apart totally. 2 hours 18 for the second half for a 3:45 finish

9.      Where is your favourite place to train?  I like anywhere around Athenry on the quiet roads. Love a lunchtime run from work out Claddagh and out to Salthill as well on the rare nice days we get. Also love a nice quiet recovery run around the woods in Monivea.

10.  What type of training is your “favourite”? (Speed,Tempo,Short,Long Run,Slow????)  They all have their place but the satisfaction that you get from really nailing a tough speed or tempo session is hard to beat.

11.  Do you prefer solo or group training? Nearly always prefer to run in a group, for the chat on a long run and just to have someone to chase or keep ahead of on the tough ones. Sometimes a quiet solo run can be great though. Just you, your thoughts and the road.

12.  What’s the funniest/strangest thing you’ve seen or heard on a run?  Some of the funniest things heard would be from either Ray Somers or Patrick Forde and there’s no way they could be repeated here.

13.  If you were to give 1 piece of advice to a newcomer to running what would it be? Enjoy it. The day we stop enjoying our running is the day we need to step back from it.

14.  What injury has caused you the most problems since you started running? Luckily I’ve never had too many injuries. The only one that put me out for any length of time was a bout of shin splints back in 2014. Those were brought on by my own stupidity and thankfully have not been repeated. I suffer a bit from tight calfs and hamstrings but never enough to stop me. The foam roller helps a lot.

Thankfully the arthritis has only ever flared up a few times over the last few years.

15.  Do you cross train? If yes what type?  No. I keep saying that I must but I just don't seem to have the time for it. I do foam roll and stretch at home pretty regularly though.

16.  What is your most embarrassing running related incident? Being passed in Dublin one year by a man wearing a mankini. Despite the rumors I can confirm now that it wasn’t Frank Burke.

17.  Which club member would you most like to beat in a sprint to the line?  Fergal Walsh. May as well aim high. Realistically though whoever is ahead of me coming towards the finish, especially if they are wearing an Athenry singlet. I’m just a little bit competitive.

18.  Do you have a favourite current or past athlete that inspires you? ? I am a big fan of John Treacy, it’s hard to believe that he still holds the Irish Marathon Record given all the advances in training techniques etc.