Published in Reports on 26th October 2007 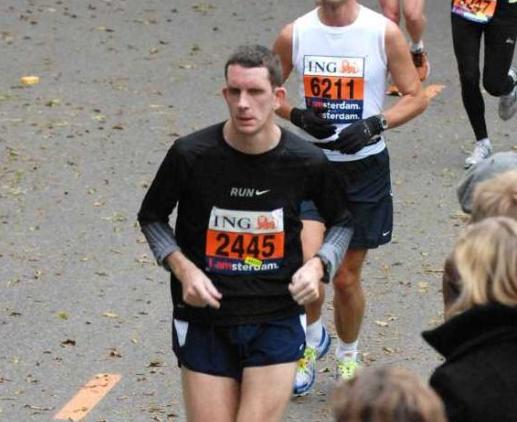 Well it was a short while coming. On we go then to Amsterdam
once more. I am making a point at this stage to not look back at
previous reports on the same race as my experience differs so
much from year to year that a sneaky look might alter my
assessment of how the race went. But I do remember Amsterdam
last year fondly as a foray into the unknown. I was depending on
Google Earth to get me from my hotel to registration and back
again, but this year I knew the ropes. Flew out at 6 on Saturday
evening from Dublin, marathon in the morning and back in Dublin
again by 6 that evening. A 24 hour whirlwind tour.

I had no idea what to aim for as I headed off, absolutely no idea
- sure I'd break 4 (he said confidently.....) but would I go for
another 3.30? I didn't think so. I decided just to 'run as I
felt' and let it happen. Waking up on race morning was a
delight, an extra two hours in bed (I'm usually up at 6.30), into
the petrol station next to the hotel for a coffee and I bought
the most gorgeous croissant I have ever tasted! Everything was
going great, the weather was perfect... A taxi pulled up right
beside me and I jumped in - this was too easy! I picked up my
number, found a seat and relaxed and it was still only 9.20. I
was settled... Far too easy. Familiarity brings a leisurely
reward and knowing your way around takes an enormous amount of
stress off your shoulders.

So all was going well and nothing really happened until I passed
half way in 1.48 something. I thought I was running a bit
stronger than that but wasn't too conscious of time - and then
something weird happened. In an instant I decided to go for sub-3.30
and picked up the pace immediately, setting off in a zig-zag
course around the more sensibly paced. I heard echoes from
Germany. It was Mick, calling to me, sloooooow downnnnnnn,
was supposed to be a scary voice> slooooooow downnnnnnnnnnnnn.
But I couldn't and picked it up. Sorry Mick (scary Mick).

My calculations were working overtime as I'm not overly used to
splits in K's but by the time I reached 30K I knew that I had 59
mins to do the last 12. Sub 5's it was then and the real work
began. From memory, my splits were being hit consistently just
under 5 minutes and I felt this was just about doable, while all
the time (as usual) waiting for the big fall. By the 36K I gave
up the chase... but decided at 37 to go for it again and stayed
on target. I gave up again at 38 but picked it up at 39 and
finally gave up for good at 39.5K. I was done. I walked through
a water station and started to curse that bloody voice that was
saying speeeeeeed uppppppppp. Will I ever feckin' learn? It was
at this point that I questioned what was the point of running 26
miles anyway and called on The Almighty to put me out of my
misery. And so I trudged along in a shuffle to be embarrassed
enough about without the photographers waving to us to look
happy, and me not able to lift my feet in any co-ordinated way.
To rub salt in my tired limbs the humorous Dutch organisers
decided to put a huge inflatable across the road with a sign
saying 'laatste kilometer' or something like that - It might as
well have read 'de plaats om te sterven' (that should boost
Babelfish's hits by about 10).

I struggled on, using the motivational words of a Marathon Des
Sable finisher who said it took him 90 minutes to cover the last
4K - I only had a quarter of that distance to finish in 'glory'
so surely I could make it. And I did. In 3.34.odd. It seems
strange not to celebrate a pretty good finish time, for me
anyway, but I did suffer badly in the last 2,000 metres. The
lesson I'll bring to Dublin next week is slooooooow downnnnnnnn.

My recovery was good enough to walk the two miles back to the
hotel and catch the coach to the airport to make the flight back
to Dublin in good time. Amsterdam 2007 wasn't too nasty but not
too nice either.