All Shook Up - Craughwell 5KM Race Report of Sorts 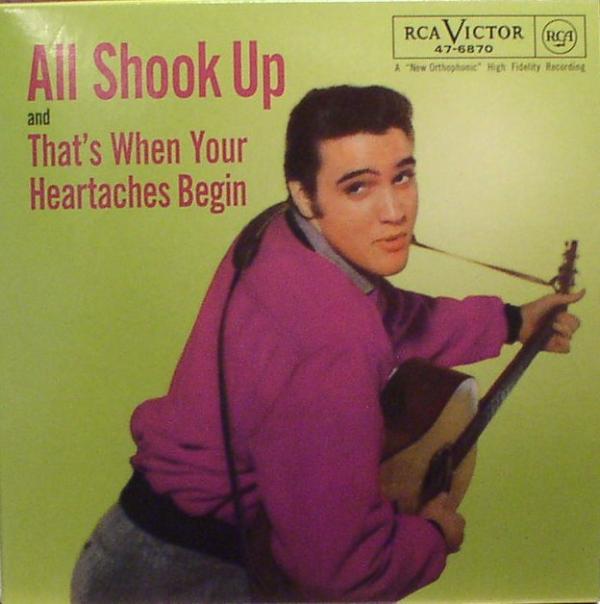 All Shook Up - A race report of sorts from Craughwell, Race 3 of the 2009 Galway May 5KM Series

Seven, six, eight, four, nine and nine miles. Not my previous 6 days' running but my last 6 weeks'. That's the Way It Is, no real excuses! I haven't been feeling the best, not exactly sick but not exactly 100% and running of any sort is difficult in those circumstances. My Tuam time of 20:09, 7 days previous, was my first race since Ballycotton a full two months before. I was hoping to race myself into a bit of form or was the Tuam time just Pot Luck? I added the Kilcornan 8KM on Sunday 12th in the mid-36s. The evening before Craughwell, I reffed an U-14 hurling game. It Hurts Me to say that it was hardly the perfect warm-up for a hard 5KM considering my lightly-trained state. That is All That I Am - Welcome to My World.

Good Rockin' Tonight - the sun was melting the tarmac driving into Craughwell from Galway and it was quite obvious by 7:15 PM that there would be a huge crowd lining up on that now well-known side road. The wind was strong and chilly. I didn't tog off too soon, tell myself that, "I Don't Care If the Sun Don't Shine as long as it doesn't rain."

A quick scuttle up & down the N6 and then down to the start, spying Frankie and Johnny (Burke and O'Connor) in the distance - both fresh from recent good marathon performances. "Don't be Cruel to me tonight," I told the two lads. Waited a few minutes for everyone to get in position, holding tightly to my front-line stand near the top of the field and right on the starting line. Mickey Kelly in the Tuam AC green was in front of me talking himself up, as always! Fair play to the chap for keeping going. Not many know that this old-timer won All-Ireland Cross-Country honours for Galway in 1959, exactly FIFTY years ago - a time when it really meant something to win such honours.

I Got A Feelin' in My Body - my right calf was niggly. Fingers crossed that it would stay away for the next sub-20 minutes, a time I was quite confident (delusional?) of achieving. Last year, I ran 19:28 here, beating my good friend Dave Dunne for the only time in 2008 (my Blue Moon race) in the process. We were going our Separate Ways this evening but he's Always on My Mind. He claims to have done even less than I have since Ballycotton, if that were possible! I've run a lot of 5KMs at this stage and still have no real idea what my PB is for this distance on the road. My track PB being a meagre 19:55, the second 5KM of a 10KM time of 40:22 I ran two years ago in Dangan.

Today would be my day, I kept telling myself. Tony Nevin, the Big Boss Man, eventually got everyone behind the line by imploring, "C'Mon Everybody!" It's is no exaggeration to say that I was skinned by at least 50 people over the first 1500 metres, right the whole way up to the GAA pitch, where Craughwell were hosting Gort in a Senior Hurling League game.

Took the first KM really easy, holding back on numerous occasions. It was like a Speedway race, going down to the first bend. There would be no Fun in Acapulco over the next 19-some minutes. I Got Lucky with my starting position and could hold the whip hand - people had to go around me to pass, not the other way around. Frank Burke forgot his "indicator" as He Touched Me going past outside the Community Centre. He shouted back to me, "I'm Counting on You." "You Don't Know Me, My Little Friend," I squeaked. He replied, "I've Lost You?" I simply said, "Pure Gold," and left it at that.

Girls! Girls! Girls! - just before Frank mowed me down, I was passed by three women (all good runners though) in Jane Ann Healy, Caroline Clancy and Ann-Marie Hynes. Not sure which was the Long Legged Girl though. Mick Rice scuttled past in-between Frank and the three girls. Couldn't argue about any of them passing me, though I was surprised that they hadn't started ahead of me in the first place and that it took them as long to pass me as it did.

Down the main (only!) street and then up the hill by the GAA pitch. There was already a gap opening up ahead of me, which was soon filled by my good pal, Paul Giblin, who Chi-stepped around me on his way to a near sub-19 minute superb run. Allegedly, only his 5th ever road race? Follow that Dream, my friend. Dave Dunne was already on both sides of the road nearly 100 metres ahead. I reached two KM in a little over 8:00 and was still feeling OK-ish.

The next KM was a bugger and one that cost me 9 seconds to my zero-sum state of four minutes per 1000 metres. Fool, me, for losing those seconds. I was in T-R-O-U-B-L-E and running Solitaire too. Easy Come, Easy Go. By this stage, my old nemesis, Brian G Geraghty had already slipped by, chasing down Joe Scanlan. Exalted company, indeed, but how many people around me knew how exalted exactly - Irish Senior, European Masters medallists etc?

Three KM and the working farm loomed up to my left. There was an impressive procession of people ahead of me, with me falling further behind. No doubt, if my little one saw me then, she would have shouted out, "Don't Cry Daddy."

A Date With Elvis beckoned and A Little Less Conversation ensued. The search for Elvis began as I turned the corner to trek up to four KM. He was duly spied in the same location, about a minute shy of the green and white marker, in the window, looking out perplexed as usual. Was he The Real Elvis though? People were still passing me as I raced that KM in 4:04, the same as the second KM. I was 15 seconds under water and struggling. No stitch but nothing in the tank either. Geraghty and Scanlan weren't getting away from me but that was little consolation as I had twenty plus years on both of them.

The last KM is mostly downhill, to the starting line again and that stiff little incline as one turns the last corner and up to the finish at the old bridge, over the soon-to-be-reopened Athenry-Ennis railway line. Double Trouble as I could hear two sets of steps bearing down on me going up that last hill. I had to give way to both but did hold off a final flurry from one other fella behind them. A 3:54 last KM to dip in under 20:10. The exact same time as Tuam too! I was gutted and my expression afterwards betrayed as much. No Fame and Fortune for me. Moody Blue, for sure, though it was more my pride that was Hurt than anything else. I finished Way Down in 80th place. Just Because it didn't happen this evening doesn't mean it won't happen next Tuesday evening. Life goes on. Only Believe!

I wasn't in much form to talk to anyone, For the Heart was taken out of me. Heartbreak Hotel! Basically, I didn't do Too Much of anything. I'd say I looked like a right Hound Dog just then. Dave Dunne kept telling me about my time, "That's All Right." Also bumped into an improving ever-present Gary Doherty, and told him, "I was Trying to Get to You in vain!". He retorted that, "There's Always Me in Claregalway!"

I continued to hold up the railway bridge until Thomas Porter came around and dragged me around the course in a warm-down clockwise lap. His new Blue Suede Shoes had just carried him under 19:30 again. We passed Patricia Monaghan on the way home and made sure to tell her, "You'll Never Walk Alone." Probably the best warm-down lap I ever did as Thomas threw more of his perils (sic) of wisdom in my battered direction. That's Someone You Never Forget in a hurry, is our Mr. Porter. We met a goodly number of race adversaries on that loop. Just for You, don't let Thomas tell you his latest joke about the free prize that was offered for every fill of fuel!!!!!

Onwards and upwards to Claregalway next week, more Wild in the Country fun and frolics. The race will start and finish at the new Business Park. Nothing has been done to make the Rock Road hill any less difficult however. Ye have all been warned. These 5KM races have Something for Everybody. Let's Shake, Rattle & Roll!

Come What May, one race closer to that fantastic red technical top (Ron Hill)! Any Day Now I'll break 20:00 and reach my Promised Land. One Night very soon, Such A Night. It's a Matter of Time, only! It would be My Wish Come True. Do I need a Good Luck Charm, I wonder, or would I need it to Return to Sender? Ask Me another? If I Can Dream, I will!

P.S. So just how many Elvis songs & albums are mentioned above? Check Wikipedia for their Elvis Discography if you are really serious about knowing...

Everyone else was finished except...

...Patricia Monaghan, Kathleen Hogan and one other when Thomas & myself set out on that clockwise lap :-).

You do know James that the club are already on the lookout for a jumpsuit and wig combo for you for next year's race!

He's cracked up at last. Gone a bit Tutti Frutti!