Published in Reports on 27th October 2015 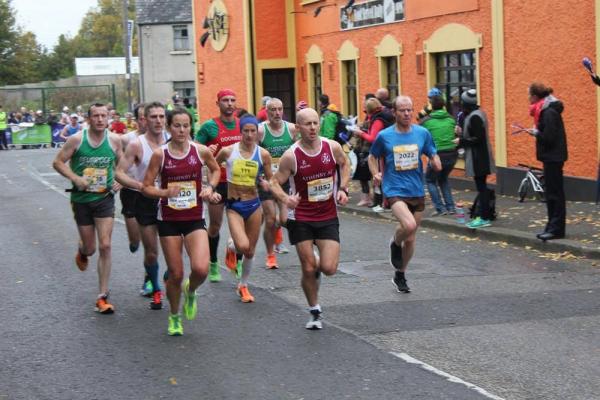 Dublin City Marathon's inaugural race was in 1980 with 1,420 finishing. This year in its 36th year just under 13,000 runners took part, an increase of about 2.7% on the figure for last year. Traditionally the race takes place on the October bank holiday Monday but plans for 2016 announced recently mean the race will take place a day earlier on the Sunday. As a result the organisers are hoping to attract a larger number of athletes including athletes from overseas. The weather was more favourable this year than last. The temperature was reported to be cooler with a few drops of rain on occasions and it was windy on certain sections of the route. Overall the runners seemed happy with the conditions.

Forty five runners from Athenry AC took part in this year's Dublin City Marathon. A great day's running yielded some incredible results which including five sub-3 finishers, four of these were under 2.55 and one ran a sub-2.50. There were a number of PBs, first time marathon runners, 36th time marathon runners (Peadar Nugent) and two National medal winners!

Jane Ann Meehan finishing second Senior Woman in 2.54.43 beating pre-race favourite Sarah Mulligan in the process. Her race time was 2.54.48 which is a course record for Jane Ann having competed in this event five times.  It is the first Senior Woman National Marathon medallist in Galway in a generation.

Martin Keane picked up a bronze in the M70 category, completing the marathon in 4.48.06.

Peadar Nugent remains one of as few as 12 who have now run all 36 DCMs.  Maire Treasa Beatty provided company for him all around the course on Monday morning and part of the afternoon.

2016 Results Men's course record was set in 2011 by Geoffrey Ndungu (Kenya) 2.08.33. Alemu Gemechu of Ethiopia won this year's race in 2.14.02 with the Irish winners as follows 1 Sean Hehir 02:19:47 Rathfarnham W.S.A.F. A.C. (won the race again in 2013) 2 Gary O'Hanlon 02:25:21 Clonliffe Harriers A.C. 3 David Mansfield 02:30:45 Clonliffe Hariers A.C Women's course record was set in 2010 by Tatyana Aryasova (Russia) 2.26.13. Nataliya Lehonkova of Ukraine won this year's women's race in 2.31.09 with Irish winners as follows 1 Pauline Curley 02:49:32 Tullamore Harriers A.C. (finished 3rd in 2013) 2 Jane Ann Healy-Meehan 02:54:48 Athenry A.C. 3 Laura Graham 2.56.21 Moyne Paddy Monaghan was first finisher in the wheelchair category finishing in 1.43.05 Sonya O'Sullivan who won the race in 2000 in 2.35.42 returned after 15 years to complete the distance in 3.03.39. Ollie Kyne "My 2nd marathon. Last one 20yrs ago. Predicted time 5:30. My time 4:57:04 coz l had to push on so l could get to naas to watch 2nd half my niece winning U15 county B camogie final. No pressure lol. Next marathon in 2035 hopefully" Kieran Guiry "3.11.45 for me. A 2 min PB. Things went well up to half way. Went through in 1.31.40 but just gradually fell apart in the second half. Overall a bit disappointed but happy enough that I managed to pull a PB out of it. Could have easily been a lot worse. Will reassess and go again" Kieran Walsh "It was my first marathon! Got a time of 3:36:28 Could barely walk afterwards!" Orla Sugrue "Delighted with my run yesterday. Time: 3:49:33 my 3rd marathon and a PB. Took 13 mins off my DCB 2013. Race went to plan and finished strong. Legs a bit sore this eve. There were alot of PBs yesterday!! Kenneth O'Dea "Found last 8 miles very tough and by mile 24 I was asking myself WHY? Still managed to keep fair pace and finished in 3:18:43. It was my 3rd marathon, first since 2009, naively thought it would have been somewhat easier but not today." Ronan "Speedy" McCarthy "The plan going out was stick with the 3:20 pacers for as long as possible and then once "The Wall" was hit (which was inevitable) to try hang on for dear life for a sub 3:30. The plan for once worked and after hitting the wall around mile 21 I held on for a 32 minute PB at 3hrs22mins, delighted, emotional, drained....was it worth it, damn right it was!!!" Caroline Freeney "2nd timer, 20 mins faster than last year, time was 4 hour 35 mins Pat McDonagh "This was my 3rd marathon My time 3 18 40 a five minute pb" Sinéad Keogh "I ran my first marathon yesterday. I had been training/hoping for a sub-4 hour and I scraped in under the four hours in 3:59:58." Martin O'Hara "3:24:50. A BP of 1:16." Paul Daly "Race went great, really enjoyed it and the atmosphere was electric. Plan was to do a 3.50 and ended up with a 3.43 so delighted. It was a 28 min PB from my 1st Marathon in Cork 2 years ago. Really enjoyed it and finished the last 2 miles as fast as the first 2 miles so that was great. Can't wait for next year!!!!" Mike Mitchell "I finished my first Marathon in a time of 4:27:38, everything went well on the day. When I started running earlier this year, I was never aiming at running a Marathon, my training was always aimed at taking part in Gael Force on August 15th. It was only after that my sister Clare suggested we give the Dublin Marathon a go - the extra miles required was a shock to the system but we ran the entire race together. Clare will say that I have a few years (not that many) on her but I was carrying a lot of extra pounds around for 26.2 miles." Sean Flaherty "Was first marathon, time 3.49" Angela Mc Manamon "2nd Marathon 3.30.43 PB. last year time was 3.58"

Caroline Freeney "Second timer, second year in a row up to the DMC , got off to a great start , phoenix park was much kinder this year with us going down hill rather than the up hill we had last year. The Athenry supporters were out shouting support at us even at this early stage. It was great to see, caught up to the 4:30 pacers in the park, I stayed with them as it was a good pace for me all the way to somewhere between mile 18 to 19. I was doing good and all was going well, from mile 20 I told myself only 10 k to go, sure you think that should be easy, not so much after already running 20 mile. I got to mile 23 and from there it was a struggle. I had a good talk to myself and told myself to keep running I had run so far and don't stop now, I also remembered why after last year I said I was never doing another marathon and I was not under any circumstances doing anymore, finally saw the finish line, kept running , the line seemed to get further away for a bit not closer. Listing to the crowds got me in, the atmosphere for the whole race was fantastic as was the support from Athenry. That's my review in a nutshell, roll on DCM 2016, where I will try to knock another 20 mins of my time. Or maybe just go for a 2 min pb on second thoughts"

Chris Deakin "My time was 3:09:50 and it was a PB. As usual there was great support from other Athenry AC members and a great atmosphere the whole way around. The support was there when you needed it but there were also plenty of quiet leafy streets where the miles floated by. It is so good to see familiar Athenry faces popping up along the route and particularly towards the end when the wheels start going in different directions. At mile 20something I was feeling tired but still moving well and passing people and I remember hearing a shout of "Come on Chris, bring it home!". It was Lyall, who I'd already seen much earlier on in the day. Having crossed the finish line I spotted Frank and Jim and waddled over to hear about Jim's amazing time and Jane Ann's silver medal. This was a great day for the club perfectly summed up by the smile and genuine delight on Dave Noone's face when he heard about Jim's sub3. That's Athenry AC for you!

Congratulations to all who competed for Athenry AC on the day.  You did yourself and the club very proud!