Published in Reports on 4th October 2015 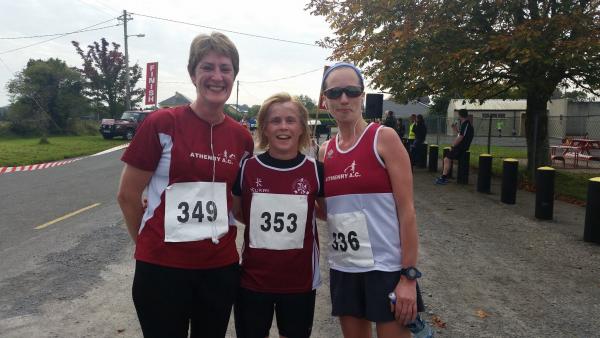 Galway Bay 10km, Half Marathon and Marathon all kicked off on this morning. The race started and finished alongside the famous Claddagh Quay on the edge of Galway City. The Marathon was the first race of the day starting at 9.00am. Weather conditions were perfect (although it felt a bit cold while standing around!). 203 runners lined up to take on the course, a lovely flat route of 4 laps.

Nicola Cosgrave was first to cross the line for the ladies finishing in 18th place overall in a time of 3.19.21. Second place was secured by Annmarie Connell 3.22.35 and third place Maria Hayes 3.30.56. Valerie Glavin looking very fresh following her 100 mile race in London recently completed the race in 3.54.26.

Next to line up were the 10km runners which had more competitors than the other two distances. 1,367 athletes ran a single loop of the route. Starting at 9.30am the athletes were cheered by locals across the distance.

Siobhan O'Doherty from Borrisokane was the first lady home in 35.10 with Martina Kiely of St Finbarrs AC taking second place in 36.26 and local lady Regina Casey GCH 36.46 was third. Our own local runners from Athenry AC were Miriam Wall 44.43, Marie Cronnelly got a PB 52.53 having returned from injury recently and was delighted! Jane Mangan also got a PB 53.01 following her PB in Loughrea 8km last Sunday! Well done Jane! and Marie Coyne completed the distance in 56.40.

The final race of todays event was the Half Marathon which took in 2 laps of the course. 1,104 athletes gathered at 11.15am to run the 13.1 miles. Temperatures had risen by about 2 degrees at this stage and the weather was perfect!

A great turn out from the club today and half of those who ran got PB's. Well done all!