Published in Reports on 30th December 2015 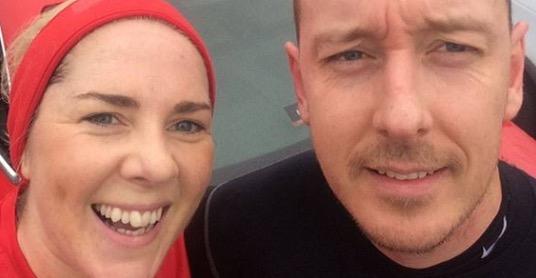 Following on from the enjoyment of last years #akwrunstreak I signed up once again in earnest to run 30 minutes or 5k per day for the month of December. Organised by Sean at Amphibian King it was just the target I needed to try get back on track with some training at the end of this year.

Prior to the start of this year’s streak I had been running 2-3 times per week 5k–11k per run, nice and steady, squeezing in the sessions when I could. Throughout the year I had let my time for training slip and only raced once in 2015 at the Craughwell 10 mile roadrace in March. I really needed to kickstart something for 2016 and have a focus during the upcoming festive period. The #akwrunstreak was the perfect plan.

It was a busy few weeks in the lead up to the #streak and indeed the first 2 weeks of December were a bit manic having handed in my notice at work in November I had a mammoth workload to get through to finish up with the Irish Cancer Society in mid December. Coupled with plotting and planning for 2016 for Tri Talking Sport and of course a jam packed social diary for the month of December, I was looking forward to the timeout the #sanityclause would bring each day with the chance to make time for me, to just run... Although getting out some days was admittedly tougher than others after too much festive fun!

The Fields of Athenry 10K on Stephen’s Day became the focus of the streak. Not sure how the legs and body would hold out with my limited amount of training in advance of December but I wanted to put in a solid performance at the race. If nothing else I wanted to just test the body, see how it would hold up under pressure, both from the 25 days of running up to race day and also in terms of where my fitness is at heading into 2016. The race did not disappoint.

The 'Fields' is a great local, club race hosted by Athenry AC and is the perfect way to keep the indulgences on Christmas Day somewhat within reason. Don’t get me wrong I ate plenty throughout the day, the turkey sandwiches at 10pm the tastiest part of the day as always!

Waking early on race day, I wasn't feeling the love. I would have preferred to stay in bed but that thought disappeared fairly quickly as I got excited at the prospect of participtating in a race rather than being on the mic, plus I still had to get my 5k done for the day so I got ready to race. I picked up my pacer, Noel Griffin and off we headed to Athenry. As always the marshals have the parking down to a tee, no issues, #Renaultcaptur parked quickly and easily. Into registration and again the volunteers and marshals were brilliant and efficient, in and out in record time.

Along the way pre race it was great to see and catch up with some familiar faces, Ray O Connor www.runireland.com and Frank Greally www.irishrunner.com having a chat pre race, as well as a host of people from Galway Triathlon Club, Galway City Harriers, fellow #streakers and plenty more people from across the county and beyond, all friendly faces, wishing each other good luck and of course Happy Christmas.

With a few minutes to spare, we queued for the loo (plenty portaloos on site, never any harm to have a few more) and then it was off to the race start. Just as the gun went we joined the crowd down towards the back of the pack, close to the 55 minute pacers. Based on my training to date and the running times of the streak I had thought somewhere around 55-58 minutes would be a respectable time for me and also doable. Considering this was Day 26 of 31 days of running I didn’t want to overdo it and I also wanted to finish the race. I had decided to try and stick with the 55 minute pacers and could move on or fall back as was needed.

Off we go, cross the timing mat, Garmin on, Strava on and it’s straight up that first hill, it is a killer, you have barely started running and already are on an unforgiving hill. The 55 minute pacers already had gained great ground and I was fearful of running too fast in the first km, the goal at the end of the day was to finish, I didn’t want to have to pull up half way through.

When we got the top of the hill we had the joy of the downhill, what goes up must go down. Noel tells me I am running 5:30km, which is what the plan was. As we continue along the early part of the course the time pretty much stays close to this and I was comfortable. I got the odd word of encouragement and a few jokes from Noel, at one stage I thought he was going to start making up a song called the ‘Hills of Athenry’ as we continued along the course making it to the 3k mark and the water station.

I was feeling ok, we had passed a few people I knew at this stage and were gaining on the 55 minute pacers. I got a few ‘ shouldn't you be on the mic’ comments going past which was a nice boost and brought a bit of banter as we continued on the course. Coming into the 4k point Noel tells me we are running well ahead of the planned time and to just keep pushing until the 5k mark, then I can relax for 2k and pick it up again. I could not wait to hit 5k for my ‘rest’! At this point we had passed the 55 min pacers so I knew if I could keep the pace up I would break 55 mins.

My fear was I had gone out too fast and would not be able to sustain the pace but as we approached the next hill Noel told me I was holding steady. The pace wasn’t slowing down as we went uphill, we continued to pass people on the hills recovering slightly on the down hills, but continuing to run well ahead of the 5:30 min k's we had planned.

Hitting 6k, time for more water and the sight of another hill, I was getting tired at this stage, trying to control my heart rate, but I knew we had at least one big downhill from 9k-10k so I just kept going. We hit some minor flooding on the course, the ice cold water was a welcome wake up for my feet and there’s nothing like a bit of splish splashing in puddles to increase the novelty factor on the route and create a distraction from the tired legs.

When we got to the 8k point I was happy that we were running downhill, facing into good road surface and a few small uphills, but it was less than the length of the prom to the finish so I just had to keep going and knew I would finish the race. It was all about the time now.

Hitting the 9k point was a welcome relief, we were picking people off all the way from 8-9k; people who had passed us earlier, some we caught up with joined and ran with us, others I had in my sights for a couple of k’s and just focussed on as targets to reach and pass. Noel continued to tell me I was running well and better than the time we had planned so I did my best to try and just stick with him and the pace.

The boost at the 9k mark with the gathered crowd was great, as well as the upcoming down hill section. The support on the course at the junctions was brilliant, the shouts of encouragment from the marshalls much appreciated. Running that last km, I knew I could finish the race, my legs were screaming, but my head said just keep going. I knew I was below 55 minutes and that I needed to keep something in the tank for the final sprint under the arch.

I wasn’t sure I would make it to the finish at one point in that final sprint to the end but pushed on, mental strength winning over the cries from my legs to just stop. I crossed the finish line in a time of 53:13! Almost 2 minutes faster than I had planned! I was out of breath and wrecked, I had left it all on the course, but was very excited to see the numbers on Strava. I hadn’t really been looking at my watch thoughout the race, just relying on Noel to tell me whether we were on pace or not.

Finishing under the iconic arch in Athenry, there were lots of familiar faces and plenty of marshals to direct you to the ample water and bananas on offer. It was great to see everyone, happy to be finished after #workingoffheturkey. After a quick change it was into the hall for tea and bickies and a catch up with fellow runners and the supporters. The atmosphere and energy was one of excitement and accomplishment, everyone in great spirits. Day 26 in the bag for the #streakers!

My final result from Red Tag Timing was 53:06, the fastest and longest (time and distance) run of the streak. I also ran my fastest run of the streak 26:02 for the second 5k section of the race which was a nice surprise. Day 27 was most definitely a 5k and a #recoveryrun.

Although not my fastest time over the past few years at the race it was a good test and a great starting point for setting out my training plans for 2016 and a proper return to racing. Now to just get on my bike and get in the pool to start some much needed triathlon training.

Thanks to Sean at www.amphibiankinggalway.ie for getting us all motivated for the #sanityclause this year, to Noel for his superb pacing on race day and to Athenry AC for once again putting on a great race. I'm looking forward to reading my copy of www.irishrunner.com picked up from Frank Greally as I was leaving the race.

Thanks to Joanne for her report.