Published in Reports on 24th January 2016 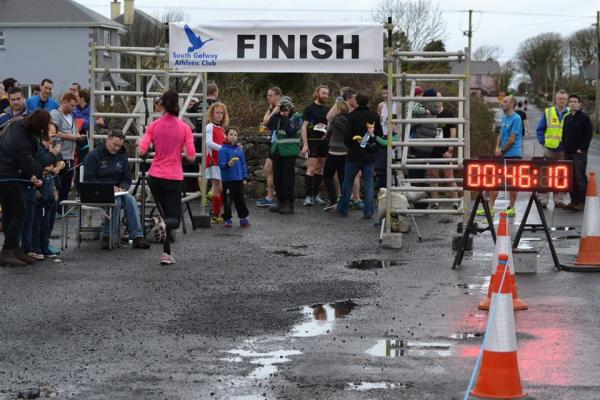 Ballinderreen 10km was originally set for the 29th November 2015 but due to flooding the race was re scheduled for Sunday 24th January 2016. Ballinderreen village is approximately 22 km south of Galway City and is a part of the townland of Ballinderreen. Baile an Doirín, means town of the little derry or little oakwood, suggesting the area may once have been more heavily forested with oak. This is a popular race due to its flat course offering an opportunity for a PB! Numbers were up slightly this year with 142 athletes taking on the single loop course. Victorious for the second year in a row GCHs Matt Bidwell took the honours in the men's race crossing the line in 32.27. Less than 30 seconds behind was Kenneth Rodgers completing the distance in 32.55. Galway City Harriers John Greaney finished 3rd again this year after achieving the same podium position in 2014. Johns time was 34.13. Athenry ACs Niall was 23rd overall in 40.18 with club mate Kieran Walsh hot on his heels in a time of 41.03 The women's race was won by Athenry ACs Deirdre Brophy, finishing her race in 41.42. In second place Dalva McPhillips was 2 mins behind clocking 43.41. Tuam ACs Anne M Hession was 3rd lady home in 44.18. Also from Athenry AC Majella Cummins finished under the hour 57.55. Congrats to all!

Results from Ballinderreen 10km are here and attached.