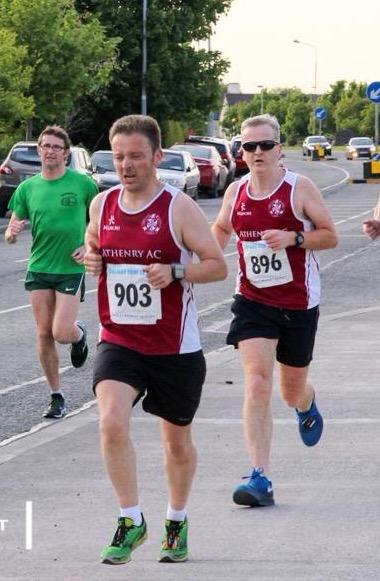 The London Marathon was the reason I first ran a marathon. I remember watching in 2008 and finally thinking "yes, I'm going to do this." I promptly entered the ballot for 2009, didn't get in, and went to Edinburgh instead. I vowed then if I was going to do London, I'd get in on the good for age which I got in 2013 at Chester. With moving to Oranmore in 2015 I ended up deferring my entry until this year.

We flew out to London on the Friday before the race but didn't have time to get to the Expo until the Saturday. It wasn't the mad scramble that I'd heard (and feared) it might be, but my tip to anyone going from Athenry would be to fly to London City airport as that would make registration on your way into the city. The Expo was great and I stocked up on gels for the race and souvenirs for after (including a "My dad ran London" t-shirt for our elder daughter!)

On to race day, and my usual pre-race panic mode plus having to get from the far north of London to Greenwich meant I ended up at the start area with over an hour to spare on a chilly morning, But the assembly area was fantastic with tea, coffee and tents for changing. The atmosphere was beginning to build and over the PA system we could hear the Paralympic athletes and then the elite women's race being started off.

Finally it was time to hit the starting pens where the PA announced the elite men and the start countdown was relayed from the International Space Station (allegedly). Being in the good for age pen meant I was over the start line 20 seconds after the gun, not the 15-20 minutes you sometimes hear stories of. It's then out onto the roads. The first few miles have a lot of road furniture and dodging the traffic islands in among the mass of runners was a little crazy. After the three starts converge (around three miles) things seemed to settle down until we came to the Cutty Sark at about 10km where the noise from the spectators lined six deep was deafening. I was grinning from ear-to-ear and thinking "this must be what riding the Tour de France is like."

The crowd didn't really drop at all from there to the finish and there were so many cheers of "Come On Athenry" it was incredible. I'd set out aiming for a big PB, but by 30km was tiring and the last 5km were really tough. But seeing my wife and daughters at about 23 miles gave me a big boost to push through the drag through Parliament Square and up to Buckingham Palace, And then it's all about waiting until the 200m to go sign and digging in for the line.