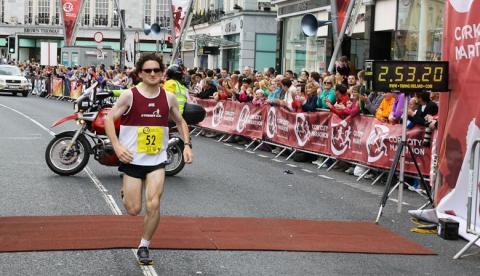 Indulge me please: I need to write a little about the last six months first, before describing this race.

I had a sub-2:40 target in New York last November, but capitulated in the last 10 miles to finish in 2:54. I remember feeling jaded, not exhilarated, on the morning of the race. It was probably a combination of over-training along with the psychological stress of a recent niggling injury. Whatever the reasons, once I hit the Queensboro bridge, the remainder of the race became a write-off. But despite the outcome, I knew I was more or less in 2:40 shape - a 1:16 Athlone half along with a 1:28 in Cork-Cobh preceded New York. After taking it easy in November and December, I started afresh in January.

I was training steadily. Nothing mad - no more than 40-45 miles a week. I managed a 3:03 in awful conditions in the rescheduled Clonakilty race at the start of Feb. [Aside: That was probably my worst ever marathon experience. It was utterly miserable weather: my hands were too numb to open an energy gel after 17 miles! I full-on hit the wall in the last 5 miles: I walked parts, and got disoriented and nearly stumbled off the road. Also my mom was hovering over me for about a half hour after finishing as I sat crumpled in a chair - she's never done that before.] Anyway. A couple of weeks later I comfortably (ish) ran a marathon in training, and three days after that ran a 1:19 half in Cambridge (my brother lives there - good excuse to visit). That was the end of Feb. The bad experience in Clon apart, it was the sort of stuff that made me think: "I'm getting back to a good level."

Five days later, on Friday 4th March, I finished up with my job at Paddy Power in Clonskeagh. For most of the second half of 2015, my anxiety levels had been going through the roof. The work environment had played a significant part in that. I covered it up (or maybe added to it) with the hard training I was putting in for New York, but after I crashed and burned in that race - with nothing to show for the time and effort invested - I was now exposed to the reality of a job and a set of social interactions that were stressing me out. It took me until only very recently to properly understand this. It took me till February to figure out I needed to change job.

I started a new job in Blackrock in mid-March. I suddenly had no stress. No social anxiety. I wasn't training (because of the tendinitis) but I didn't mind. I commuted by bike and DART. Dublin bay panned across the view out the train window every morning and evening. I fell inwards a bit - stopped seeking out conversation, stopped texting friends. I wandered around Dublin 7 some evenings, exploring. I went to cafes on my own and read my book. I went to work, came home, watched TV, listened to music. I stopped worrying about life.

I ran the Connemara half in mid-April (after entering ages ago, too stubborn to discard the entry), with no proper training since the end of Feb. It went okay, but it aggravated an otherwise improving tendinitis injury. Ooops. I stopped running altogether then, until mid-May when I ran a trail race half-marathon in Italy while visiting a friend. That went okay too - I just jogged around and tried to enjoy it. It also seemed to produce less tendon-related fallout than Connemara. I was still doing no training whatsoever though, with the Cork marathon looming.

Do I bail on Cork? It was a question I was asking myself. This would be the tenth year since the event was rebooted in 2007, and I've participated every year (two relays and seven marathons). I couldn't bail on Cork.

Last Saturday I jogged 4 miles around the block at home. "Well, that's training sorted," I said to my mom, flippantly. And so I went into the race with absolutely no goals or expectations. Like, properly none. This was new. Even the races for which I've been ill-prepared in recent years, well, I'd still have done *some* training for them, so still had some notion of what time I'd likely run. Like in Dublin 2014, I'd only just moved job from Galway to Dublin, and with all the churn had only managed five weeks training, but still wanted to sneak under 3 hours. You know the feeling, right? You tell yourself: "I'm happy to just get around today. No real target." But deep down, you still have a target. Well, this year in Cork, I had absolutely no target. No pressure. It was really and truly liberating. It was like... sitting on your own in a cafe with a book and being totally content in yourself, happy to let the rest of the world pass you by.

Okay okay. It's race day. With all the above said and done, it turned out I was still fit enough to run comfortably with the 3 hour pace group for about 14 miles. So I did. I knew I'd probably fade, but didn't mind. We ran solid 6:48's (+/- a few seconds at most) to half-way.

As we ran along the old railway line to the Marina, I dropped back behind the pace group, and settled into 7:20 per mile pace for the next seven or eight miles. I thanked or saluted spectators as they gave us their applause. I high-fived the outstretched hands of kids. I stopped for a sec near Turner's Cross to take jelly babies from one little boy - he was way too happy about that.

At the Victoria road relay changeover, someone shouted at me: "Get the blog going again Lyall." That was a nice thing to hear. Just before that, I passed a runner who shouted at my back, "ten in a row Lyall!" I don't know how he knew me, but he was also doing his tenth - all marathons, in fairness. No messing around with relays!

I smiled for most of the second half. It probably turned to a grimace a few times, but the smile wasn't long returning.

I started to feel the heat and the heavy legs for the last few miles, while coming in along the Carrigrohane road and the Mardyke. I had to drop down to 8:00 per mile territory, but didn't mind. I finished out the brilliant last mile, starting with the winding river path by the old distillery, in the north mall, along the quays, and then finally rounding the corner onto Patrick's street and the spectator-lined finish.

I love running the Cork marathon, but most of the other years, it's been all about the the race, the athletic endeavour, the finish time, the highs and lows, the elation or the dismay. This time it was simply about running this race that I love running, and I cherished every minute of it.