Published in Reports on 5th June 2016 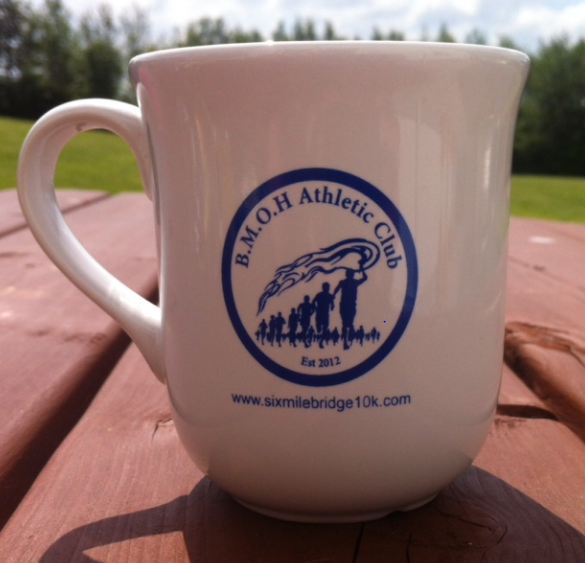 As the tar melted around the roads of Athenry we made the trip to Sixmilebridge in Clare for the annual BMOH 10km in glorious sunshine. Chris made an unusual comment for an Irishman as we hit the M18 near Gort that "thankfully it looks like there may be some cloud cover ahead". This weather prediction did not ring true.

Depending on whether you were saving turf or running a 10km race you would have a different opinion as the mercury hit 24°C by the time we landed in Clare.
There was some sympathy for the holiday makers heading to Shannon airport as the wettest weather in 35 years was taking place on the continent.

Admiring the beautiful countryside and vast rolling hills as we entered the village little did we know we would be cursing these same hills pretty soon.
We headed for the local school and handed over a very reasonable sum of €15 for our race number and a souvenir mug. The nearest thing to a cup we would receive this evening!

With some great music playing in the background and one of the most entertaining MC's that you'll find, it set the scene for the evenings event. One thing I noticed is the Clare lads have strong bladders. I took the Galway man's usual two trips prior to the race start and not a sinner to be seen on either occasion.

Race brief was to the point, and without fuss the gun went off as advertised at 7:00 P.M. As we settled into race pace the field quickly spread out and two local lads powered on out of sight by the 4km mark.
At 5km the rolling hills were taking their toll and I was thinking the two weeks spent in Portugal recently were great for my sanity but not as good for my fitness levels.

Battling on for the next few km's, I now realise a sarcastic F'er had a sign at 8km which read "No more hills, really!".
My spirits were lifted as I naively believed, but of course this was short lived.

At 8.5km we hit a Ryehill like stretch that went upwards until 9.75km, I crossed the large inflatable finish arch with the tank emptied, sweat streaming but well happy to have gotten an honest hard run under the belt before the next training cycle begins post the holiday season.

The course profile - I really can't remember any flat sections along the route!

All three Athenry lads (Chris Deakin, Kieran Staunton and I) passed the line in quick succession and all placed in the top 10.
There was a complimentary leg massage provided by a charted physiotherapist which was a godsend after the hammering the legs received in the previous hour. Also two evening spent in the bog earlier in the week required some quad TLC.

The post race spread would have fed the entire club, top class grub and lots of it. Hats off to all involved in organising this event. The runners were catered for in a manner that sets the bar high for all others.

Great evening was had by all and the usual craic and banter was had with some very friendly locals. One chap of course asked "Did ye Athenry lads travel up to win the race". All I could do was laugh as I knew whatever answer I might give he had already formed his own opinion.