Published in Reports on 14th August 2016 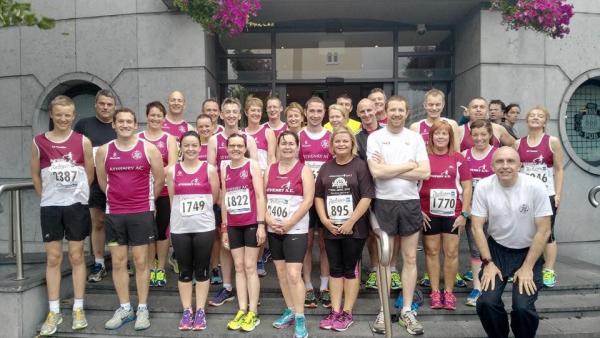 2506 athletes completed this year's Streets of Galway 8km. The iconic club photo usually taken on the steps of Jury's Hotel was organised by James Lundon. There was a smaller representation from the club this year as the Rock 'n' Roll Half Marathon was on the following morning. Race conditions were described as blustery, but for once, we saw the wind favour athletes as they ran along the prom in the final stage of the race. There were a few reported PB's and possibly more! We saw an impressive finish to the ladies race with only 18 seconds separating the 3 podium places.

Deirdre Brody was the first Athenry lady to complete the race. She ran a PB of 31:21. Another PB was achieved by Janet Clancy who crossed the line in 35.43 mins. We done ladies!

As always the race was very well organised and a great success. The local turned out in force along the route to cheer and encourage the athletes along their way! Roll on 2017!