Published in Reports on 30th October 2016 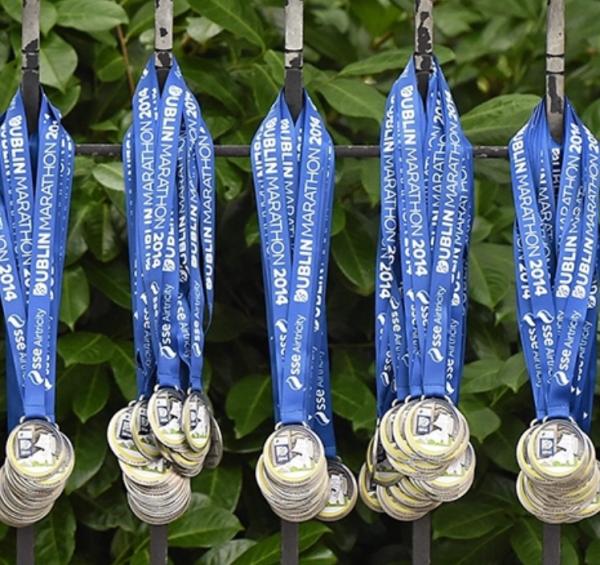 Dublin City Marathon traditionally on Bank Holiday Monday was changed this year to a Sunday resulting in a 25% increase in entries compared to last year. In its 37th year, approx 19,500 athletes including 5,700 international participants gathered at Fitzwilliam Square to take on the 26.2 mile loop around Dublin city. This race is the fourth largest event of it's kind in Europe and attracts elite athletes from around the world.

As in previous years a large contingent from Athenry AC took part is this year's race.

Sinead Martin
Toughest ever (4th marathon!) Second fastest 3:44:56 legs cramped from 12 mile onwards. Had to stop and walk 3 times! Was just a matter of completing it at that stage as I was doing it for charity in honour of my dad. Def one for mental toughness!

Kieran Guiry
3.48 for me. No proper training done so happy just to finish. Really enjoyable first 20 miles or so running with Kenneth and Martin. Such a different experience being able to tske everything in. Would recommend it to anyone to run an easy one. Legs started cramping then and it was just about getting home. Myself and Kenneth seemed to take turns cramping up. An interesting day.

Kieran Staunton
Still on a high after yesterday. Some brilliant results for the club. Most enjoyable so far, crowds were brilliant. 5th marathon. 3:03:50 PB by 9 mins. Tough but very enjoyable. Frank Burke was with me for the first half.

Orla Sugrue
This was my 4th marathon and 3rd in Dublin. Time was 3:45 which was a 4 min PB on last year's DCM. I was delighted as I had a very disrupted two month lead into it carrying an injury after Quest Achill Adventure Race and a two week trip to the US with work early Oct. Ran on my own for most of it although I crossed paths with Aoife and Sean F at some point. I felt I finished strong with 2 of my fastest miles at 24 and 26. I was following my HR so I wasn't sure how it would all work out. But happy with my result and body feels ok today. Great day, support on the streets was phenomenal, atmosphere in the city was buzzing. Reckon I will have to sign up for next year.

Ray Treacy
First marathon for me yesterday, I ran just under 3:38. I found it very tough from mile 19 but delighted to get it done. I ran with Colin and Angela until mile 18 but couldn't keep with them. They were running very well and finished very strong.

Peadar Nugent
I successfully navigated the DCM course yesterday and I now have 37 Dublins in the bag. My chip time was 5:28:02. No, it wasn't a PB; at my age I couldn't be expecting to beat my PB of 2:58:50 which I achieved way back in 1992. Yesterday's journey was both tough and comfortable. I had prepared meticulously for it. I was accompanied all the way, and not for the first time, by clubmate Máire Treasa Beatty. You may have seen the two of us being interviewed in the main RTÉ 1 main evening news. The two of us had another clubman, Michael Glynn, for company in the later stages after we had hauled him in and the three of us crossed the finish line together

Janet Clancy
Last Sunday was my second Dublin marathon. First time was 2012. Was hoping to do around 3hrs 45mins (same as 2012) or a bit better if possible. Training went OK aside from a Yoga related concussion 5 weeks ago which ruled me out of any training for 7-8 days. Was also stuffed with flu for week leading up to Sunday but thankfully was over the worst of it.
Myself, Maeve & Mairead were all on the same plan throughout and all aiming for 3.45.
On race day we said we'd stick together til mile 20 and then each to their own if they felt good after that.
Weather was absolutely perfect and miles 1 - 10 sailed by no problems, and all on target or slightly better.
Miles 14-16 i began to struggle a bit, had taken on a gel at half way mark so not sure was this causing it.
Thankfully started to feel good again around 17-18 miles. Was tempted to push on at this stage but knew to hold back til mile 20 (as from plenty of warnings from the boss Maeve). Decided not to take any more gels, just water and some sports drinks and a much wanted sip of coke from Deirdre Quinn.
At the 20 mile marker Maeve told me to push on and she would stick with Mairead. I passed the boys (Kenneth, Kieran & Martin)& said a quick hello and carried on. Felt very comfortable up to about mile 25. Energy began to wane a bit here but I knew I had only 1-1.5 miles left so gave it all I could.
Miles 22 and 24 were my fastest of the course but don't think I would have had this if I pushed on before mile 20, so thanks to Maeve for that.
Finished comfortably in 3hrs 41mins so a 4 minute PB from 2012. Delighted!!

David O'Sullivan
I ran Dublin for the first time on Sunday, my third marathon and finished with a PB of 3.27.25 which I'm happy with but I faded quite badly over the last 4-5miles. In that respect it was my worst finish, if that makes sense. I ran in club colours for the first time which gave me a boost and I got shouts of encouragement of 'Come on Galway!' all day long. I wanted to shout back 'but I'm from Kilkenny' but didn't have the energy and anyway I was from Athenry on Sunday. I made the team photo at the start but only saw one or two club runners out on the course as they glided past me by on mile 24 so it was mostly a solo effort.
My carefully prepared nutrition plan fell asunder on mile 16 when everything fell out of my running belt. I had put it on upside down, disaster!! I stopped to pick up my gels and power bars off the ground (which are horrible anyway) and nearly tripped someone up behind me. All of a sudden I'm on the path trying to stuff it all back into the belt and the hands are shaking I'm so annoyed. When I got back in my rhythm was gone and it took me 2 miles to settle back into the race by which time the 3.20 pacers had opened a gap that I couldn't close. In any case the closing stretch was painful, I really struggled over the last few miles and my average pace dipped from 7.45 to 8.30. I didn't even have a kick in the home stretch. It appears I'm smiling in the video I saw of me going over the finish line but trust me it was a grimace!!

Some stretches at the finish line and a light jog/hobble around the luas park and ride in balally put me right before driving back to a nice hot bath, blisters and a few beers. Sore legs but generally happy and a lesson about pacing but considering I sprained my ankle on the day the club marathon training started back in august I did ok..

Ray O’Connor
137th Marathon 4:19
Not a pb but 40 mins ahead of expected time :) Ran alone but met loads along the route. One of the best marathons I’ve run around the world.

Kenneth O'Hara
Third time in Dublin & just went for the day out this time. The lack of training miles showed through though & the last 6 miles were a death march due to cramps. The engine is still good thankfully but the body needs some work :) 3.48ish

John Killion
3rd marathon to date 4:22:43 marathon time. Not a PB
Very tough. I was aiming for 3.45 but ending up getting a stomach virus at the start of the week and by the time I got half way I had no energy left.
Run with club members

Marguerite Wilkinson
3rd marathon...2nd dublin. found it tougher this year cos l have a niggling injury. thought it was very humid with no breeze at all. Happy out with 4.00:01...not my best time but could have been a lot worse. started with the lads but did my usual take off and was on my own after a km. found the course very crowded this