Published in Reports on 26th November 2016 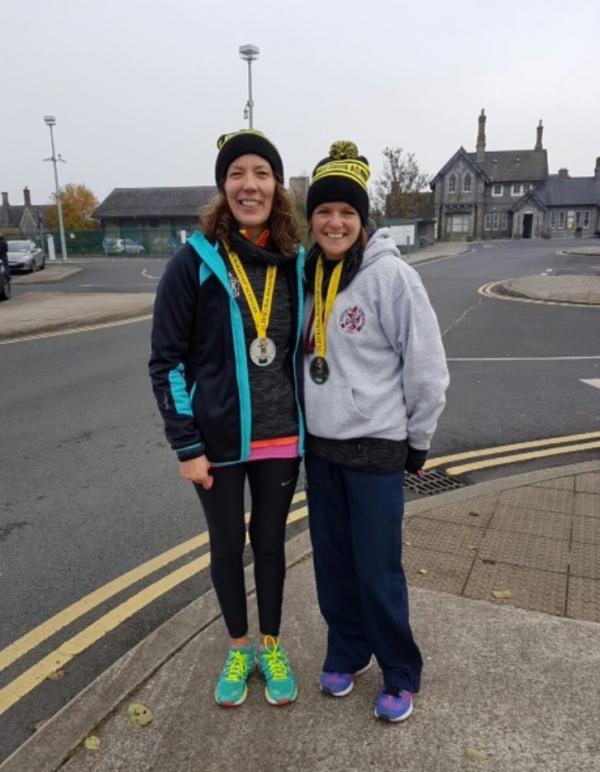 Leaving Athenry Sunday morning it was minus 3°C and by the time we hit Portarlington the temperature hadn't risen, in fact it was now extremely foggy and felt colder. I had initially planned to run the half marathon but decided at registration to switch to the 10km as my training was a little haphazard and I was feeling under the weather... this had nothing to do with the cold conditions!

The organisers were fantastic, no problem switching on the morning. Both races started together which meant Esther who was running the half and I made our way to the start line, with teeth chattering to join the other 950 competitors.

After a loop of the town we headed out in the direction of Mountmellick . At the 7km mark the 10Km runners turned and headed back for the town. It was a great feeling to be on the home stretch as my feet still hadn't thawed out and I honestly couldn't feel the road beneath me. As the leaders looped back into town I realized I was roughly the 4 or 5th female. I’m thinking has the cold frozen my brain to a point where I was unable to count (Hello Mary this never happens).

As 8km I felt pretty strong and passed two of the ladies that had been in front. It was at this stage that I hoped my calculations were correct. Could I be in 3rd. All I had to do was hang on and get over the line. What a feeling and new experience to hear your name as you cross the finish line called out as the 3rd female home. As luck would have it I made the correct decision and opted for the 10k. A podium finish and a time just shy of my PB. It really was the perfect reward for our day out. And for the icing on the cake or in this case the gingerbread man, was Esther sailing home with a shiny new PB of 3mins. What a fantastic performance! While I didn't quite catch the gingerbread man, I did “Run as fast as I can”.

It is a very well organised run, very generous prizes and great refreshments with each participant getting their own delicious gingerbread man to be enjoyed guilt free. And to cap it all off, each participant received the most useful medal, it doubles up as a bottle opener.