Published in Reports on 5th February 2017 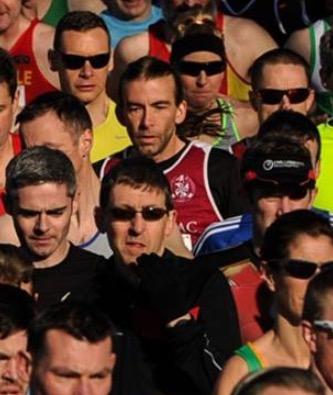 Gearoid, Donal and myself headed to Meath for the Bewley's Trim 10 Mile Road Race. Our day started bright and early in Joyce's Ice Rink in Athenry on what was a very cold morning. Once we hit the motorway the roads were fine and we were on our way with blue skies overhead. This looked like perfect conditions for running.

We arrived in Trim in good time, collected our numbers, got in a warm up and headed for the start line hoping for a good run. By race start at 12pm the weather was absolutely perfect for running. The gloves were on but it was blue skies all round and zero wind. So that was one excuse we wouldn't be able to call on later.

The course starts in a business park with plenty of warm up areas and after a couple of left turns you are out on quiet country roads. There are no major hills to worry about, just a few inevitable drags that come with running 10 miles in Ireland. But if there was an up, there was a down and the miles went by as easily as could be expected. Just over an hour later we were back at the business park and there it was – the finish gantry!

Donal finished in a PB of 1:09:52 in only his second 10 miler, with around 1000 runners behind him. I had a PB of 1:01:28 and was delighted with it. Given that it was his first race back after his injury, the pre-race chat had Gearoid looking for a time of around 1:04, which would have been 5 minutes off a PB but still a good solid run in the circumstances. When I was crossing the line I thought I heard the finish line commentator saying well done to the Athenry lads (plural) and sure enough when I turned around there was Gearoid. It's great to see him back in business.

So after a warm down and a stretch we headed back west with just two more stops to make. One for a coffee and one at the lake in Loughrea (Donal's crazy idea) for a dip in the cold water to help the legs recover. As we pulled in to the car park we noticed three brass monkeys running in the opposite direction. They seemed agitated.

The number of finishers jumped from 650 in 2016 to 1264 in 2017, and it will likely increase again next year. There was no queue to pick up our numbers, a good honest course and a nice long sleeve top (although you had to enter by a certain date to get one). They also sent out an email looking for feedback before we even got back to Athenry. Trim AC put on a good show and we hope to be back again next year.