Published in Reports on 6th March 2017 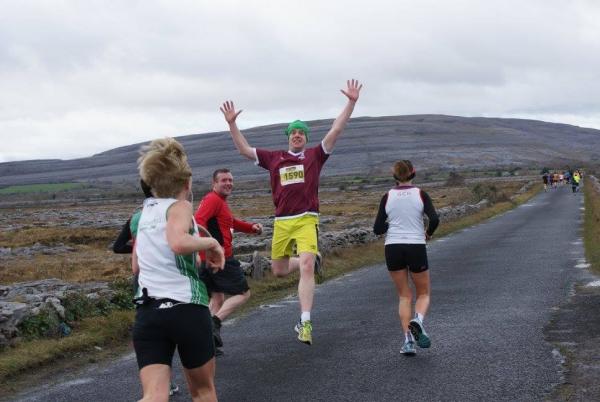 After the biblical floods in the week preceding Kinvara Rock and Road 2017 it was a pleasant surprise to wake up to a dry, blustery cool morning race day.   Pat Mc and Michael D (Ok, our own Mick D) joined Mary and I on this short road trip. The mood was positive, as we had all feared far worse weather conditions. We arrived in Kinvara without much fuss in the way of traffic and got parking hassle free in the middle of the village. We then made our way to the community hall where we got the VIP treatment by the mostly Athenry crew manning the number pick up desks. The superb Kinvara long sleeve running top was also a very welcome addition to the running gear basket.  We were all very relaxed as everything was falling into place like clockwork and hopes were high that this would continue for a few more hours   Athenry AC’s Luca Lualdi was in the hall and feeling excited at the prospect of racing his first half marathon. He had an ambitious target of sub 1:50 and as luck would have it, his partner Angel along with Pat Mc were pacing that distance. He was in good hands.   The decision on what to wear was topical as the wind was biting a little. Toughen up and go for just a singlet and risk freezing or layer up and overheat. Went out for a few miles pre-race with Mick D and Jane Ann and also met Mark Mitchell who was out on the quite country warm-up route. With the long sleeve top and windcheater on it began to warm up a little. Decision made in conjunction with running mates that the singlet was all that was required (and shorts I suppose)   Kinvara is one of those races that is so well organised, once you manage to get yourself to that start line in time the stewards will handle everything else. The 10k started at midday and the half marathon kicked off at 12:10 as intended. The maroon singles of Athenry AC were out in force over both distances. At the start of the half marathon we chatted with Orla S, Kieran G, Speedy, Martin O H and Kenneth O’ D, to name but a few of the other club members taking on the course.   No surprise to those of us that have ran this race previously that the first 4 miles are uphill. We had the wind at our backs on this section which helped greatly in reducing the effort required on the inclines. Plan was to speed up slightly at the 4 mile turn off but the blustery wind had a different plan in store. At the turn off into the open Burren landscape the wind was head on and maintaining current pace was the main focus. It may be a wonderful sight in different circumstances but this 3 mile stretch of open barren lunar landscape did little to excite me. Grit the teeth and keep those legs moving.   The photos captured by Anne Lyng around the halfway mark confirmed this was the case!   We all expected a break from the wind at around the 7.5 mile mark as we turned back towards home but for some reason this was also into a headwind and the nearby mountains seemed to work against us. By mile 10 we had the wind at our backs and the final few miles went by pretty quickly, apart from a killer short hill at mile 11, ouch! The finish line gantry is top notch and included live commentary on each runner that passed.   The chat with the 10k runners seemed to indicate that times were pretty consistent with the target plan before the race whereas the half marathon runners indicated it was a little tougher than pre-race expectations due to the breezy nature of the day.   Post race refreshment were a real “treat” and the carrot cake and coffee was more that welcome.   A snapshot of some of the Athenry runners included Caroline Moore who ran 44:37 and Bernie Mulryan ran 45:44 securing excellent category wins for both athletes in the 10k. Mairead Blake completed the course in a time of 46:37 and was delighted with 3rd place in her category.   Luca romped home in 1:49:35 in the half marathon, job done!   Jane Ann Meehan finished in a very credible second place overall running the half as a training 2:50 marathon pace run in preparation for her next outing over marathon distance. Tammy Corrigan was 3rd in her category and finished strongly in 1:33:37 alongside Ronan “Speedy” McCarth and Yvonne Fehily. Kevin Devane ran a 2:04, Sheelagh Earls completed the course in 1:56 with Kenneth O Dea running a strong 1:39.   Congrats to Chris Deakin and co. for hosting such a wonderful event and delighted the weather picked up on the day to make it a most enjoyable outing for all.   Hopefully we will all be in good health to make it to Kinvara Rock and Road 2018!   Results: http://www.sportsplits.com/Home/QuickResults?clientId=74&raceId=253&cult...   Photos: https://www.facebook.com/athenryac/posts/10154321517166024   Race Report Gearoid Rohan