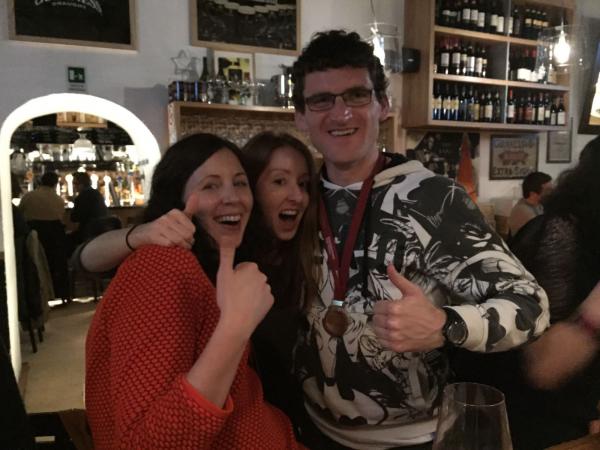 More than a minor sub-3 in the end.

An Italian fella at the start line told me there were 8km of cobblestones in the race, and that it was not a fast course. Okay - what harm a few cobblestones I thought?

It was dry and calm when we started but after about 20 minutes a thunderstorm passed over us. Cue a further 20 minutes of thunder and lightning and rain. And very slippery cobblestone sections for the remainder of the race. :/

Rome is actually a shite course - apart from the beautiful scenery. Besides the slippy surface, there are so many right angle turns from one street to another. For most of the course, you can forget about seeing the route unfold ahead of you in the distance. All the turning adds up in the later stages, as the fatigue grows in the legs and in the mind.

The crowds were shite too. Individuals cheered, same as anywhere, but the banks of spectators were quiet, and the passing tourists just gawked, disinterested.

Also, there were no mile markers! I had to live with metric splits on my Timex Ironman stopwatch. Damn Europeans! I don't like too much feedback in a race, so just took the 5k splits.

I was bang on 20-minute 5k's up to 30k. After that, well, I'm just not fit enough yet to hold a sub-2:50 pace I guess. :) But I was able to hold on to 21-minute 5k's from 30k to 40k. Very happy with that - the fatigue was coming, but I managed to dig in and halt its advance. Two shouts from the crowd for my Athenry AC singlet in the closing km's didn't hurt either - thank you anonymous Irish people. :)

It nearly killed me to hold even that pace for the last two or three kilometers to the finish. But I managed, and came out with a 2:51:37. That's actually my fourth fastest marathon ever, on a shite course, with a thunderstorm, and also the remnants of a head cold from earlier in the week.

Ten weeks ago I was starting from scratch, again, after more Achilles problems late last year. And 2016 was the worst year of running I've ever had, between injury and motivation problems. I think NYC 2015 had a huge part to play in that. The outcome that day was hard to take.

In contrast, today was a good day. I feel tired but strong. Emotion welled up and overcame me for a long time after the finish line, as it often does when I run a hard effort marathon. This time though, there was added significance - because today told me that I'm BACK.