Published in Reports on 6th April 2017 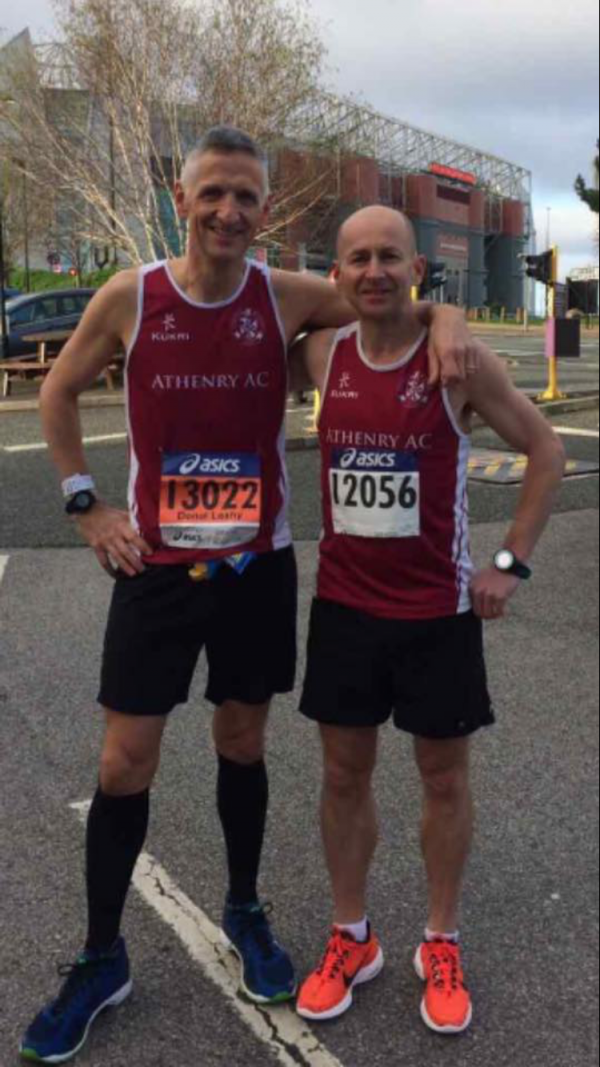 After chatting to Donal Leahy towards the start of February he planted the idea of taking part in the Manchester Marathon. Donal and I signed up and a good support team of volunteers made themselves available for the weekend away.   Flying out from Dublin on the Saturday we bumped into Sinead Martin and her friend who were also going to take on the marathon next day.   The flight time of 40 minutes is a real plus when considering a marathon location outside of Ireland and the transfer time to Salford where the marathon village is located is 15 minutes by Taxi. Manchester united were playing at home in Old Trafford at 15:00 which influenced our decision to have the “last supper” a little earlier than usual as our hotel overlooked the stadium and we had figured that we needed to be seated before the match day crowds descended on Salford.   This turned out to be an excellent distraction from the marathon and helped us hydrate fully as we had an extended sitting, with Donal and I sipping on water and the support crew hydrating on liquid that looked much more appealing.   The hotel had arranged a buffet marathon breakfast starting at 5:30 a.m. which was the perfect time to graze for the 9:00 a.m. kick off. Conditions were ideal, 5 degrees C and a light crisp breeze, no excuses!   While the thousands of runners headed to the start line Donal and I sat on armchairs in the hotel lobby until 20 minutes before the race start. This afforded us the advantage of having comfortable hotel sanitation facilities at our disposal on the off chance we needed them. From previous years’ experience taking part, we knew that it was easy to slot into the desired corral right up to the start time. Our earlier comforts were appreciated even more when we passed the crowds of runners queuing for the portaloo’s as we jogged “happily” past to our relevant start locations.   The race gun was sounded without much fuss by Manchester running legend Ron Hill and we were off. There is decent support on the course and the first 15 miles seem to past by pretty quickly. Our support crew were to be at mile 16 as it was located next to a tram stop. But as it turned out hundreds of other supporters were also crowded around this mile marker taking advantage of the tram network.   The crew made the smart decision to escape the crowded street and jog a ½ mile up the road to ensure we received our planned fuel.   With 10 miles to go I had visions of the Craughwell 10 mile course firmly planted in my head to help break down the task in hand. At mile 20 the course was starting to take its toll on many and when one of the lads that was in our small group from the start pulled up it was a battle with the mind to ignore him and focus on my own race.   Our support crew had planned to head over to mile 23 and this broke the final 6 miles into two “manageable” 3 mile sections. As the body was hurting it was great to see Mary and Esther under the 23 mile marker with the small coke and jelly babies. Feeling like a school kid with my sneaky treats I kept plugging along for the final 3 miles.   There is no training session that can prepare you for those final few miles and I was thankful to see the finish line in the distance. It’s one of those cruel long finish straights of 1km in length that tests every muscle in the body.   Crossed the line and had a feeling I might have managed a PB and when I met Chris a few minutes later he had the homework done and confirmed a 13 second PB. After a layoff last winter for a few months it was great to be back racing and delighted with a 2:52:18.   This was Donal’s second marathon and he was buzzing after crossing the finish line in 3:26:24. He was chilled out while replenishing the carbs on the Alkoholfrei Erdinger that was complimentary at the finish area and discussion was beginning on what race to target next! The temperature rose to a sunny 15 Deg C around 11 a.m. making it pretty warm on the final part of the course.   We met Sinead after the race and she was also delighted with the race experience. She was beaming with her new PB 3:44:47, fantastic running and well done!   While the course is not pancake flat, there are a few hills but they are not going to sap the energy levels. The water stations were every 5km and many of them also had gels and isotonic drinks. Overall it was a very well run marathon this year and the mistakes from the past have been well and truly kicked into touch.   Sincere thanks to the team of Esther, Chris, Orla and Mary who made it their priority to look after all the nutritional needs of Donal and I. They appeared like our saviours at each meeting point at vital parts of the course and also made themselves available to join us in the post-race refreshments.   One final word to a very special lady, coach, physio and fantastic friend that brought me from not been able to walk to the front gate of the house to running a marathon PB in 3 months. Thank you Jane Ann!   Results: http://www.chiprace.co.uk/results.aspx?CId=38&RId=1508&EId=1   Race Report Gearoid Rohan