Published in Reports on 12th November 2017 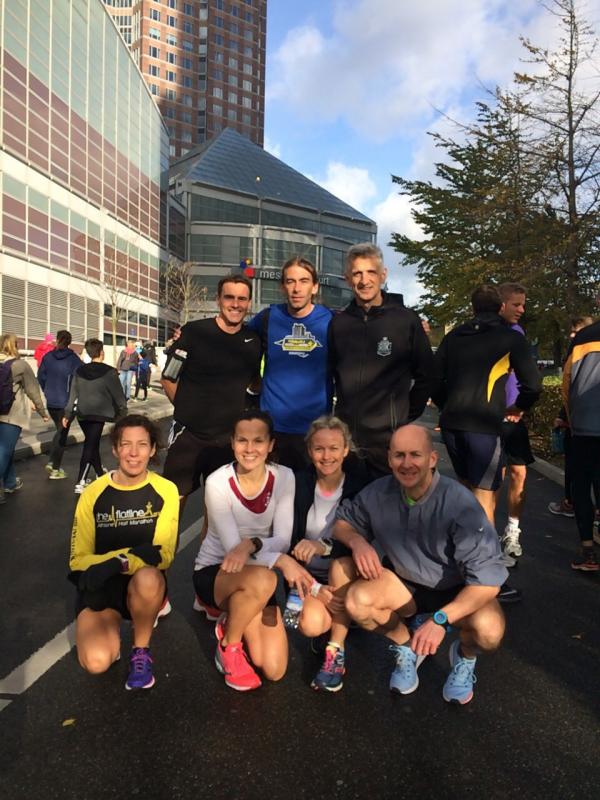 8 Go to Frankfurt​​​​​​​​ Orla Mc Cluskey
Travelling to Frankfurt this year, with a marathon to run, felt very different to arriving in the city twelve months before as a spectator. My last attempt at a marathon was several years ago, and the experience left me so traumatised that I switched to triathlons, and hadn’t revisited the distance since. Fast forward to 2017, time had passed, and I was ready to have another go. Although the training was done, in the week leading up to the race, anticipation and nervous excitement made way to just plain old nervous. When, why and how had this seemed like a good idea?

The morning of the race was subdued, with our band of runners unusually quite in advance of the off, contemplating what was ahead. Focused, freaked out, or maybe both. The race. I expected to find it tough, and it was. In no way due to the course, which is flat, but rather just because marathons are tough. A constant conversation between mind and body for 42.2km - cajoling, admonishing, and everything in between, not letting up until the finish line was in sight. And what a finish – pure theatre, and a fitting finish to a day where I felt grateful to be able, grateful to be there, and grateful to be in such good company. Thank you, Mary, Jane Ann, Esther, Donal, Dave, Gearoid, and Chris.

And speaking of company, our band of runners, how did they fare? In their own words…………

Jane Ann Meehan:
I've always loved Germany. Having spent time there while in school I've always had an attraction to it. Having ran Frankfurt in 2016 I decided to head back in 2017. I drew up a training plan and in July we started out with October PBs in mind.

There is a lot to be said for being anonymous in a big city marathon. The standard in Frankfurt is also a big attraction. With my time, I would have been third Irish home in Dublin but in Frankfurt maybe the top 30! You never have that chance to switch off... there is a constant push and unlike here where sometimes the men will protect you and shelter you... in Germany they don't like getting "chicked".

My race went well really. Apart from an unprecedented loo stop at 22km!! I won't bore anybody with a mile by mile report suffice to say... marathon running hurts. No training prepares you for those last 3 miles. Visualisation is a big part of those 3miles. Step by step. Catching person by person. Running into the Festhalle to scantily clad cheerleaders is a sight to behold. Frankfurt has been good to me.

Most importantly the friends you make along the way whilst training and racing are really what matters. Each of us have a personal goal but we all need to remember we are lucky we can do what we love and when the dust settles on the marathon season nobody cares what time you did.... you do it for yourself.

Donal Leahy:
I travelled to Frankfurt more in hope than anticipation. A very old injury I thought I had forever parted company with flared up two weeks beforehand. My taper could be more accurately described as a flatline, driven by one chance - get to the start line, give it a go and hope things held up. Unfortunately, it wasn't to be. That's life. And running! There will be other days and, while the end result wasn't there for me I still enjoyed the training and, apart from the last two weeks, wouldn't change one day of it. Next year.

Chris Deakin:
The lead up to Frankfurt had gone pretty well after a couple of months of missed training earlier in the year, so I was hopeful of having another crack at a sub3 marathon. My last marathon was also in Frankfurt last year when I ran 3:05 so it was a realistic target. Sometimes though it just doesn't go right on the day. My plan was to run as slow as possible in the first half while staying close to target pace and I managed that part alright, crossing the mat at 1:30:15. The second half was a different story and Plans B and C came and went. When the guy wearing the suit passed me I knew it wasn't going to be a good day. It was a good night though, thanks to Orla, Mary, Jane Ann, Esther, Donal, Dave, Gearoid and Mojito. Looking forward to the next one already!

Esther Leahy:
My taking part in this took me a little by surprise as I thought my marathon days were well behind me. After a break of three years from any type of distance running the hunger was starting to take hold again. I had a good summer of cross training behind me with some short distance triathlon and before I realised it my running was coming good again and I seemed to be able to cope with some longer miles. I dithered with the idea of Frankfurt for some time and eventually Donal took the decision out of my hands and signed my up – ok no choice now! With my time short I tried to stay calm and just enjoy being able to run pain free.

On race day the usual nerves were abounding and with that self-doubt – did I do enough? How much is this going to hurt? Etc. etc. Frankfurt’s start is nothing short of confusing there seemed to be no apparent entry points so it was a case of spotting a gap in the barriers and forcing our way in. This led to being very far up with the very fast runners and hoping they didn’t spot the imposter. The first few miles are looped around the city and support was strong along with the wind on the day! At about 6/7 miles you head away from the city and are taken on a few dual carriageways (nothing pretty ever to see on a dual carriageway but miles are miles). This is one lovely section through a leafy boulevard, some might even call it a forest J By mile 20 or so you are back in the city and scenery is the least of your troubles and it’s dig in time and get the job done.

I stood at the start line with no real plan other than to run as far as I could as quick as I could and see what happens. Well what happened is I had a great race and the pain didn’t kick in until 23 miles and then it was dig dig dig but I got there. The finish is really rock star stuff, the last 200 metres are in the “Festhalle” with red carpet, flashing lights, confetti pouring from the sky and of course cheer leaders. No matter how tired you are this is the lift to take you home.

Job done you’d think all you’d have to do is collapse and enjoy the euphoria but no!! Frankfurt Marathon comes with a sting in the tail – for some bizarre reason (money gain no doubt) you hire the timing chip and if this is not returned you are charged €25. In order to return this, you have to remove the chip from your lace, climb two flights of stairs and deliver said chip to the stewards then there is the issue of coming back down those stairs. This utter nonsense certainly dimmed the cheer a little.

However good cheer was restored again as one by one Athenry AC met at our pre-assigned meeting spot. Within minutes of us all meeting it was laughs and good cheer all around as we each had our own tale of adventure and misadventure to tell. That good cheer lasted well into the night and getting up to face a flight home was almost as testing as the 26.2 miles the day before.