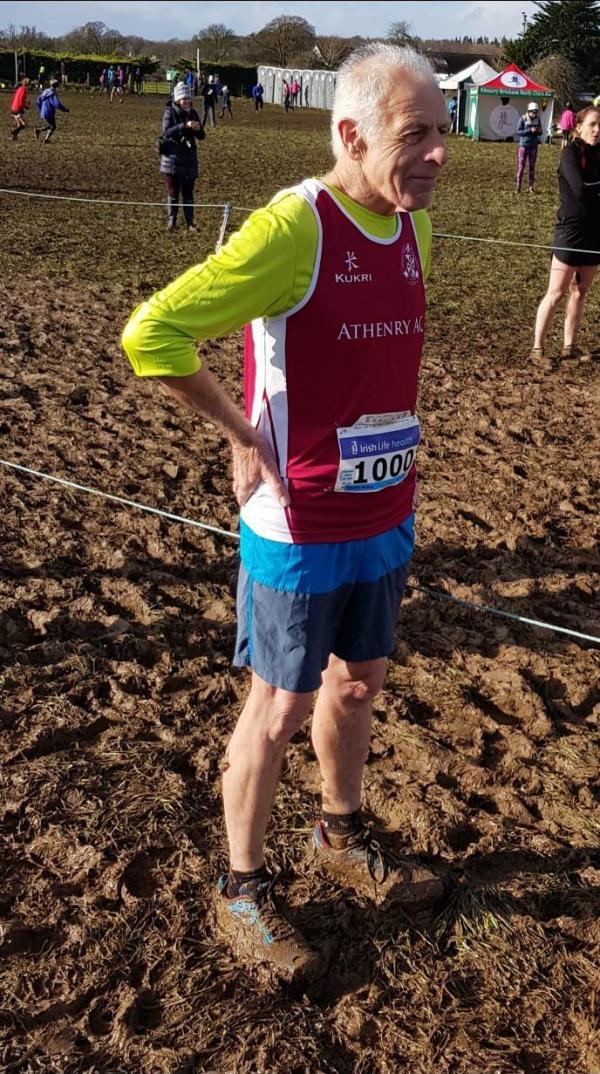 I've been to a good few races in my time. You won't always get them nice and handy or near home. Some of them I recall include Ballybofey, Ballycotton, Raheny and Roundstone.

Last year's National Masters Cross-Country was held in Waterford, on a very cold day, so as this year's event was held in nearby Clarinbridge I had no excuse.

Sunday morning (National Masters Cross-Country on 8 February 2018 in Kilcornan, Clarinbridge, Galway) after breakfast I took a peep out the back door to be met by a Christmas card scene of everything covered in snow and I thought there'll be no sporting events today, especially Kilcornan.

A text to one of the event 'head honchos' changed my mind as he said 'the show goes on!'

Coming up to mid-day I put a few things in the bag, including a pair of runners who'd see their last day, removed a lot of snow from the car and hit for the Kilcornan estate, less than 7 miles away, where the event was taking place.

After arriving, I parked the car and then proceed to have a look at the course which resembled an Irish version of Pyeongchang (Winter Olympics).

It started to make a heavy shower of hail, sleet and snow and I thought, "What the hell am I doing here today!"

After sheltering for a while I then proceeded to the HQ (at the swimming pool) to be met by a lady steward who said you're not getting in here unless you take of them mucky shoes or else put on those plastic covers which she gave me. I thought I looked like a surgeon in her hospital theatre.

Our race started at 1:30PM. At that stage 12 under-age races had been held on a course which resembled the aftermath of the Battle of the Somme, with mud ankle deep all the way around except about 50 yards where you could see traces of grass.

On the start line all the Galway M65 contingent were there: TJ, Andy, two Philips, two Martins, and myself on standby in case anyone got stuck in the mud. Thank God the race was only 4K and I, eventually, achieved what I set out: finish without falling into the muck.

No, it wasn't pleasant but I enjoyed meeting all the lads for a cuppa afterwards. Well done to all the other athletes from Athenry who braves the day and completed the course. There will be easier days in the future, trust me.

I may not be running next year but those who do I hope ye have a nice sunny day on a dry course, with maybe a bit of grass to be seen oh and not too far to travel.

P.S. Mart wasn't the only one to write about that fateful day in Kilcornan, see Frank McNally's Irishman's Diary on the day after's Irish Times.